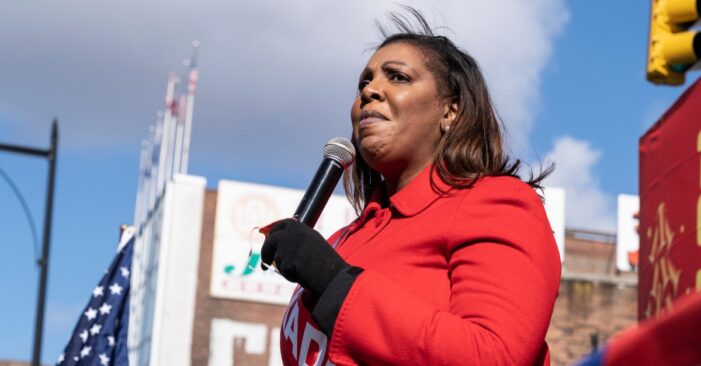 NEW YORK – New York City Mayor Eric Adams and New York Attorney General Letitia James today shut down a Brooklyn-based slumlord and scored a victory for tenants’ rights after a group of tenants were subjected to unlawful evictions in July 2020. Mayor Adams and Attorney General announced a settlement against Gennaro Brooks-Church and Loretta Gendville — the owners of 1214 Dean Street in Crown Heights, Brooklyn — for illegally evicting tenants in 2020 and running an unlawful short-term rental operation for four years across nine Brooklyn buildings. The $2.25 million settlement constitutes the largest monetary award ever for the city stemming from a case against an illegal short-term rental operator and compels the owners to forfeit the $2 million property, which will be converted into affordable housing for New Yorkers. The legal actions — led by the city’s Law Department and the Mayor’s Office of Special Enforcement (OSE), in coordination with the Mayor’s Office to Protect Tenants (MOPT) and the Office of the Attorney General — represent the city’s first-ever enforcement of the Unlawful Eviction Law.

These landlords may have been sending a loving and peaceful message out publicly, but they were kicking tenants to the curb privately,” said Mayor Adams. “Safe, affordable housing is not only vital to the city’s survival and public safety but is a basic human right, which is why my administration will never hesitate to stand up for tenants who are illegally harmed. Today’s settlement sends a clear message to slumlords everywhere in the city: Cruel and illegal behavior will not be tolerated, and, as long as I am mayor, you will never get away with putting tenants at risk. I thank the Attorney General for her continued partnership and fighting every day to protect New York City’s tenants.

“During a period of unprecedented global struggle, Brooks-Church and Gendville callously forced New Yorkers from their homes,” said Attorney General James. “We have long seen these types of harmful housing scams, especially in Central Brooklyn, where people make a business out of unfairly and inhumanely pushing others out of their homes. Let this serve as a warning: any landlord who mistreats and tries to unlawfully evict renters will face the full force of my office and the law. We will continue to work closely with Mayor Adams and other government partners to ensure individuals like these can no longer terrorize New Yorkers.”

The global settlement stemming from the city’s lawsuits and the investigations by the city and the Office of the Attorney General requires landlords Gennaro Brooks-Church — a self-proclaimed “green builder” — and Loretta Gendville — the owner of a Brooklyn-area yoga studio and a separate retail store that sells both maternity and workout clothes — to take the following steps:

Simultaneously, the landlords have settled the lawsuit brought by former tenants of 1214 Dean Street by providing them with a substantial recovery for the damages and trauma they suffered from the unlawful eviction. The New York City Department of Housing Preservation and Development (HPD) will work with an entity designated by the city to rehab the property for affordable housing.

The Adams administration will not tolerate tenant harassment,” said Chief Housing Officer Jessica Katz. “We will go to bat for tenants, protect our housing stock, and create the affordable housing New Yorkers need and deserve. Safe, affordable housing is a top priority for this administration, and our work on this case shows it. Thank you to all of the tenant advocates and community members who worked so hard on this case.”

From January 2016 through at least the summer of 2020, Brooks-Church and Gendville ran an illegal short-term rental operation — generating $1.4 million by placing 83 different listings on Airbnb, deceiving nearly 5,600 guests, and preventing 14 homes across nine Brooklyn buildings from housing permanent tenants. In July 2020, the landlords used threats and force to push out at least four tenants at 1214 Dean Street — removing their tenants’ possessions and changing the locks without providing keys to the tenants. These actions violated the law prohibiting property owners from engaging in self-help evictions — also known as lockouts — and circumvented the statewide moratorium on evictions during the COVID-19 pandemic.

The city became aware of the landlords’ illegal behavior via social media on July 7, 2020. Within three days — on July 10 — the Law Department — in close coordination with MOPT — sent a cease-and-desist letter to the landlords. On November 17, 2020, working closely with MOPT and the Office of the Attorney General, the Law Department’s Tenant Protection Unit brought its first lawsuit under the city’s Unlawful Eviction Law. The following month, on December 16, OSE filed a lawsuit targeting the illegal short-term rentals, which did not include 1214 Dean Street. Four of the former 1214 Dean Street tenants — now represented by counsel from TakeRoot Justice — brought an action for damages based on their unlawful eviction. Additionally, the Office of the Attorney General began an investigation of possible state law violations.

These defendants must pay a heavy price for their illegal actions,” said New York City Corporation Counsel Georgia M. Pestana. “This settlement demonstrates that the City of New York will not tolerate the forcible and illegal eviction of tenants — especially during a pandemic — or the loss of homes for New Yorkers to a ring of illegal short-term rentals. This is the first lawsuit brought by the Law Department’s Tenant Protection Unit under the city’s Unlawful Eviction Law, but owners who engage in this type of illegal activity will be sorely mistaken if they think it will be the last.”

“By operating dozens of illegal listings on Airbnb, these landlords took homes away from would-be residents of Brooklyn neighborhoods from Carroll Gardens to East New York to the detriment of permanent renters in need of a home,” said OSE Executive Director Christian Klossner. “But this settlement with the city and the state ensures they will not be able to do so in the future.”

“No landlord is above the law, and it is time for landlords to understand that ‘self-help evictions’ and tenant harassment are illegal in New York City,” said MOPT Acting Director Ricardo Martínez Campos. “These issues are high priority for the Mayor’s Office to Protect Tenants, and we will continue to use the city’s powerful enforcement and litigation tools to enforce our laws. This settlement sets a clear example for other landlords who engage in illegal practices that hurt tenants: New York City has strong tenant protection laws, and we will not hesitate to enforce them fully.”

“Once again, the city and state are making it clear that landlords must abide by the law. These landlords shamelessly harassed the tenants of 1214 Dean Street, locked them out, and did so during the statewide eviction moratorium,” said HPD Commissioner Adolfo Carrión, Jr. “I want to thank our city agency partners and Attorney General Letitia James for holding these landlords accountable and requiring the surrender of 1214 Dean Street to the City of New York, which our team at HPD will work to return to the community as badly needed affordable housing.”

“Safe housing is a vital, indispensable, and universal right, yet it was tragically stolen from the victims of these unlawful landlords. The individuals behind this crime exploited their tenants for years and forced many of them to face housing insecurity, all for the sake of their illicitly gained profits,” said U.S. Representative Yvette Clarke. “This settlement offers both Brooklynites a new space for affordable housing and the victims an opportunity for recovery, and it was possible through the work and commendable commitment of Mayor Eric Adams and Attorney General Letitia James. I am beyond thankful for their continued dedication to stand up to bad actors like these landlords and to make this city a safer space for all who call it home.”

“It’s about time we hold slumlords accountable for their illegal actions that lead to housing instability and displacement for New York City families,” said Brooklyn Borough President Antonio Reynoso. “Thank you to Mayor Adams and Attorney General James for showing landlords that there will be consequences to pay for the mistreatment of tenants.”

“Illegal hotel operators exacerbate the city’s ongoing housing crisis by removing residential units from the market and instead renting them short term to turn a profit,” said New York City Councilmember Pierina Sanchez, chair, Committee on Housing and Buildings. “I commend the mayor and Attorney General James for their successful case against this operator and using the opportunity to establish affordable housing. As leaders, it is incumbent upon us to protect New York City’s housing stock and to promote more permanent affordable housing for the lowest-income New Yorkers.”

“This is government at its finest,” said New York City Councilmember Chi Ossé. “Slumlords have been a scourge on our city for generations, cruelly exploiting our most vulnerable neighbors to turn an easy profit. That one of the worst actors is taken down in this manner with their property converted to affordable housing is a triumph. I look forward to New York expanding its efforts to protect tenants while prioritizing affordability, dignity, and justice for all.”