Will the Blue-collar Candidate be a Pro-Labor Mayor? 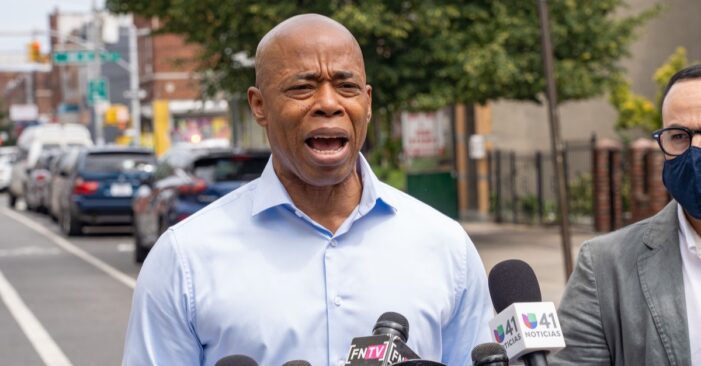 The way Eric Adams talks, you’d think his expected election as the next mayor of New York City would be the biggest win for labor unions since the 40-hour workweek.

“You should feel good because one of your own will become the mayor of the city of New York. One of your own,” Adams said to members of Construction & General Building Laborers’ Local 79 on Aug. 23 in the South Bronx. “Probably the first time in history that a union member will become the mayor.” (Not quite – John Hylan, mayor from 1918 through 1925, and William O’Dwyer, mayor from 1946 to 1950, reportedly once belonged to unions.) “I am you! I am you!” Adams said – a line that he’s been using on the campaign trail for months as he picked up the most high-impact labor endorsements in the crowded Democratic mayoral field. Adams showed love for Local 79, and the union loved him back. “He’s a hardworking guy like the laborers that we are,” Chaz Rynkiewicz, the local’s vice president, said when introducing Adams. “You guys like hard work?” A cheer went up in the orange-clad crowd.

Local 79 may have some more hard work ahead if the union wants to be on Adams’ good side. After all, the local endorsed one of Adams’ leading rivals, Scott Stringer, in the Democratic mayoral primary, and an affiliated political action committee spent $333,334 backing Stringer’s run. It’s not like Adams was tight with the union before that – he’s often criticized the city’s construction trade unions for not having enough workers of color, and he stood against Local 79 on safety training legislation and prevailing wage legislation.

Now, in the honeymoon period after the primary, everybody in labor wants to be Adams’ friend, and Adams wants to be friends with labor. But that’s easier said than done, as a number of unions will have to weigh just how hard they want to work to keep Adams on their side.

The United Federation of Teachers may also have one of the greatest challenges in cultivating the new mayor as an ally. After all, the UFT spent $3.75 million supporting Stringer’s mayoral campaign and continued spending even after decades-old sexual harassment accusations against Stringer became public and most political observers stopped considering him to be a viable contender. Hindsight is 20/20, now that Adams won the primary, but it’s not as if he would have been a good fit for the union’s politics anyway. Adams has been far too accepting of charter schools for the UFT’s liking. And while Stringer was talking about putting two teachers in every elementary school classroom (read: more UFT members), Adams was postulating that, for some summer classes, one instructor could virtually teach 300 to 400 students at the same time. (Adams later walked it back.)

UFT President Michael Mulgrew said the union has some concerns about Adams’ policy positions. But the labor leader told City & State he expects a good, constructive relationship. “Especially someone like Eric who’s been here and run for so many offices and we’ve worked with him at different times – there is an understanding that politics is politics, and governing is governing,” Mulgrew said. “It is what it is. Let’s move forward.”

Adams broadly speaks a lot about government efficiency and specifically pitched a two-year hiring freeze of city workers. Plans like that scare unions, which are always looking to grow. But this honeymoon period is all about finding common ground, and Mulgrew pointed out that Adams and the UFT agree that the bureaucracy at the Department of Education has gotten too bloated. “Eric was very clear during the primary process that the Department of Education needs to be completely restructured,” Mulgrew said. “And that is something we agree with.”

A potential Adams administration and Mulgrew would also have to find agreement on a new contract relatively quickly. The UFT’s contract expires in September 2022 and neither side would likely want a drawn-out battle. Of course, the UFT has been here before – the union endorsed Bill Thompson in the 2013 Democratic mayoral primary and then had to work in Mayor Bill de Blasio’s New York. That transition was far more dramatic than this one. Then-Mayor Michael Bloomberg left office at the end of 2013 without a single municipal labor union under contract. All of the agreements had expired amid a yearslong standoff between the billionaire mayor and the unions he thought were stymieing progress. The de Blasio administration came in and settled all of them. In spite of some pitched battles with labor, particularly over the course of the COVID-19 pandemic, de Blasio has been considered a friend to unions – especially compared to his predecessor.

But tension is inherent in the dynamic between the municipal unions, who represent workers, and the mayor, who appoints and represents management. Members of the unions that supported Adams and helped him win – like District Council 37, which represents many public employees, and the Uniformed Fire Officers Association – are cautiously optimistic for an Adams mayoralty. But it’s still cautious, since Adams is untested in some ways. He never served on the City Council, and since borough presidents have few enumerated responsibilities, he could pick and choose his battles.

“Those who endorsed him feel good that our person is there,” said a labor operative who asked for anonymity because they weren’t authorized to speak on behalf of their union, “but you don’t really know what’s going to happen when you’re at the table negotiating dollars and cents.”

That’s not just true of municipal unions, who have to negotiate contracts directly with the city, but also private sector labor unions, who still work with City Hall on legislative and budgetary matters. It will be easier for Adams to keep allies happy that endorsed him in the primary, like 32BJ SEIU and the New York Hotel and Motel Trades Council, since he will not have to balance the city budget on their backs. But the labor movement isn’t a monolith, and sometimes Adams will have to choose among allies. The debate over Amazon’s planned headquarters in Queens pitted major labor unions against each other and forced elected officials to pick sides. Stephanie Luce, a professor of labor studies at the CUNY School of Labor and Urban Studies, said that same dynamic will be repeated as the city comes out of the pandemic. “We had tremendous job loss and the city’s trying to recover and rebuild, but it’s too early to say where jobs will recover and not,” she said. “Labor is not united on all of these issues about what kind of jobs to create.”

Another complicating factor for unions is Adams’ continued courting of business elites such as John Catsimatidis and Bloomberg, who’s hosting a fundraiser for the Democratic nominee on Sept. 15. De Blasio had a reflexive aversion to the city’s wealthiest residents – and the feeling was mutual. Now Adams, the former police officer and former Republican, has been accepted with open arms. And if labor unions sometimes find themselves at odds, there’s no question that Adams will have to choose between subscribers to The Wall Street Journal and those who read The Chief-Leader.

But there may be no relationship more closely watched than the one between Adams and the New York City Police Benevolent Association. Adams, who served in the New York City Police Department until 2006, was once a member. And it’s that membership that helps him claim solidarity with labor – nevermind the fact that there’s an ongoing debate about whether police unions even belong in the labor movement, given their consistently conservative politics. And for that, the relationship between Adams, the PBA and the other law enforcement unions is somewhat uneasy. Most of the NYPD unions, including the PBA, didn’t endorse a candidate in the Democratic mayoral primary. The NYPD Captains Endowment Association, which represented Adams when he moved up the ranks, was the one exception, and backed Adams’ opponent Andrew Yang. But it wasn’t clear if most candidates wanted a law enforcement union endorsement anyway, given their toxicity in Democratic politics.

The PBA and de Blasio have publicly disparaged each other throughout his term, even though progressive critics have said the mayor went nowhere near far enough in instituting reforms at the NYPD. Adams is starting off on much better footing. His platform included the need to reform the culture of the police department, but didn’t mention the union. Adams has criticized the PBA before and said he didn’t want its endorsement, but at the same time, touted support from individual officers represented by the PBA. And his pro-police platform and law enforcement résumé clearly struck a chord – he was one of the three mayoral candidates that PBA President Pat Lynch recommended to his members.

Adams’ campaign declined to comment for this story. When asked about the PBA’s relationship with Adams, Lynch listed things he thought Adams could improve. “Veteran police officers are retiring in droves and the NYPD is struggling to get people to take the test,” he said in a statement emailed to City & State – although the NYPD told The Wall Street Journal the number of police officer applicants wasn’t much lower in 2021 than 2019. Lynch said the city needs to “rethink how it recruits and retains police officers, (but) Adams has an advantage because he knows what it’s like to try to rear a family in this city on a police officer’s salary. And when he did it, the pay was much more competitive than it is today.”

The fact is, no union, even that notoriously combative PBA, will be eager to criticize Adams in the early days of his mayoralty. His stock is high and he will likely be riding in on a wave of goodwill. Adams, if elected, would be the city’s second Black mayor, at a time when some labor organizations, like the building trades and police unions, are trying to emphasize their support for Black New Yorkers and better represent their increasingly diverse membership.

“There’s a shift going on here and some of them still have some white men at the top calling the shots,” said Bertha Lewis, a progressive activist who supported Adams in the primary. “There’s a changing in the melanin of who the rank-and-file members are.” Public battles with Adams would be bad optics, and the man who may be the next mayor is quick to cite the possible influence of racism in political disagreements. That puts Adams at a strategic advantage with the unions who didn’t endorse him, Lewis said. “They have to patch it up with him,” she said.

For now, Adams seems amenable. Asked after the Local 79 rally what he’d do with unions who didn’t back him in the primary, Adams said they’re on his team now and he’s on theirs. “During the primary, there are intramural scrimmages. Now that intramural scrimmages are over, we’re all wearing team jersey New York,” he said. “We are the same. I’m just a straight-up union guy.”