The ruling means that until the City Council revisits the budget, New York City must fund the school system at the same levels it did last fiscal year. 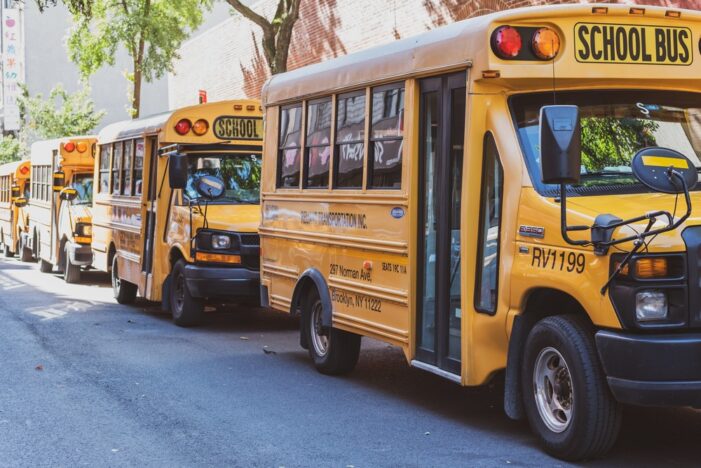 NEW YORK CITY, USA – CIRCA OCTOBER, 2018: A fleet of Yellow School Buses parked at the side of a road in Manhattan, New York City. (Shutterstock)

By Reema Amin, Chalkbeat and Amy Zimmer, Chalkbeat, THE CITY

A Manhattan judge ruled Friday to throw out the New York City education department’s budget and allow the City Council and Mayor Eric Adams to reconsider how to fund schools this year.

Judge Lyle Frank ruled in favor of two teachers and two parents who filed a lawsuit in Manhattan Supreme Court last month, claiming that the city violated state law when it approved the education department’s budget for this fiscal year.

The extraordinary ruling means that until the City Council revisits the budget, New York City must fund the school system at the same levels it did last fiscal year, which could mean at least a temporary boost in funding for most city schools. As many advocates, educators and union leaders celebrated the ruling, the city filed a notice to appeal hours after the judge published his decision.

“Obviously there are many, many court cases that have a huge impact on the city budget, but to implicate the process and require a redo or a do-over seems unprecedented,” said David Bloomfield, a professor of education, law, and public policy at Brooklyn College and the CUNY Graduate Center.

Like several of his predecessors, schools Chancellor David Banks had used an “emergency declaration” to circumvent a vote on it by the Panel for Education Policy, a largely mayoral appointed board that approves spending and contracts.

“What was most in question was whether the Emergency Declaration put forth by the Schools Chancellor on May 31 was a valid exercise of the Chancellor’s powers,” Frank wrote in his three-page decision. “The Court finds that it was not.”

Though the lawsuit focused on the budget approval process, the push to take action was prompted by Adams’ $215 million cuts to schools, which he said were necessary because of declining enrollment. City Comptroller Brad Lander, who estimated the cuts were closer to $370 million, has said the city has enough stimulus funding leftover from last year to cover the cuts.

City Council has also determined that the overall cut is closer to $365 million, based on data they received from the education department, according to new council analysis obtained by Chalkbeat.

The education department budget last year was roughly $32 billion, about $1 billion greater than this year, largely propped up by federal stimulus dollars that are now drying up.

“Students, teachers, and parents need finalized budgets to ensure they are on track for a smooth opening next month,” City Hall spokesperson Amaris Cockfield said in a statement. “We are disappointed in the judge’s ruling, and will be taking immediate steps to appeal.”

Principals may find it helpful to receive a boost of funding now, as many may still be hiring and planning out classes. However, funding levels could potentially change again after city lawmakers reconsider the budget.

More School Aid Likely
Adams had planned to phase in the cuts over two years, using some stimulus dollars to soften the blow, and argues that cuts are necessary now in order to avoid even sharper slashes if enrollment continues to fall. However, many educators and advocates have questioned the precision of the city’s enrollment projections, and have argued that schools still need all possible dollars as students continue to recover from the pandemic.

The City Council overwhelmingly approved the budget in June, but many council members apologized for their vote after public outcry over the school cuts. It’s likely that the majority of council members will push to reverse the cuts. Forty-one of the city’s 51 council members have called on the mayor to use stimulus funding to restore the cuts.

While saying that school budgets should be restored, Council Speaker Adrienne Adams criticized the education department for lacking “transparency and accountability” over how much money was actually cut.

City Council is considering legal actions “to ensure DOE permanently restores school budgets, is accountable to the public, and completely transparent about all relevant budget information and detailed accounting of the status of its remaining federal stimulus funds,” Adams continued.

But it remains to be seen how much money they’ll push for or where those dollars will come from — given that the city is legally required to have a balanced budget. The ruling offered no timeline for when or how the city needs to redo the education budget.

While the judge’s order said the city must return to expenses and “spending levels” from last fiscal year, there’s no specific language on how the city should do that.

City officials, who are appealing, did not comment on how they would comply with the order.

The city’s overall financial plan could suddenly be out of balance, said Andrew Rein, president of the fiscal watchdog, Citizens Budget Commission

Additionally, depending on the city’s interpretation, officials could distribute funding the same way as they did last year. That would send increases to more than three-quarters of the city’s roughly 1,600 public schools and cuts for the rest, according to an analysis from Lander.

Or the city could do something different, such as spend the same amount of money from last year but distributes it differently.

“I don’t think the wording in the order is clear enough for us to understand that,” said Ana Champeny, vice president of research for the Citizens Budget commission.

Many schools, in the meantime, have spent the summer excessing staff and cutting back certain programs as they dealt with smaller budgets.

Nina Demos, principal of P.S. 503 in Brooklyn’s Sunset Park, said she would welcome more funding, but it’s late in the summer to drastically alter how she would spend money without more certainty.

Her school saw 20% less funding for hiring staff and building classes, according to a Chalkbeat analysis. Demos may get money back in the winter because she’s already enrolled 40 more students than the city projected.

Between declining enrollment and lack of funding for hiring new staff, she’s cut three classes from her school. For now, she’s put several clubs, such as dance, and after-school programs on hold until she’s sure she has the money to operate them.

The news of the judge’s ruling and lack of clarity over what happens next, she said, means that “nothing is certain,” including whether her school might get more money before the school year starts in about a month.

“Then you get a windfall of money, and it’s like, well how to spend it now?” she said. “You could get it in January when the spending deadline is March.”