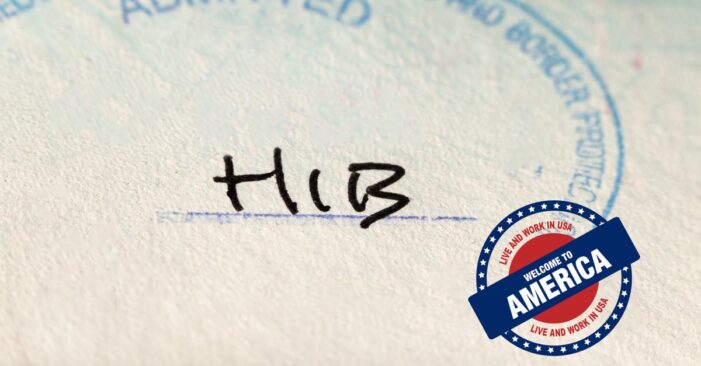 By Suzanne Monyak, Law360
The U.S. Department of Homeland Security is planning to replace the H-1B specialty occupation visa lottery, in which foreign citizens with college degrees compete for limited slots, with a wage-based selection process prioritizing higher salaries, the department said Wednesday.

Under the proposal, DHS would no longer conduct a random selection process for H-1B visas. Instead, the work visas would be ranked and doled out based on the highest salaries promised to applicants by their potential employers, the proposed rule says.

“The current use of random selection to allocate H-1B visas makes it harder for businesses to plan their hiring, fails to leverage the H-1B program to truly compete for the world’s best and brightest, and hurts American workers by bringing in relatively lower-paid foreign labor at the expense of the American workforce,” Ken Cuccinelli, second-in-command at DHS, said in a statement Wednesday.

H-1B visas, which offer a path to permanent residency, are capped at 65,000, with another 20,000 reserved for individuals with advanced degrees. However, demand has consistently outstripped supply. Earlier this year, roughly 275,000 H-1B candidates competed for those slots.

But according to DHS, the majority of H-1B positions have been filled by employees in the lowest two wage levels, which are set according to the industry and location.

Under the proposed new system, employers seeking to hire foreign workers on H-1B visas would indicate the highest wage level that matches the offered salary during an initial registration period. Assuming there are more visas requested than allotted slots, the department would then rank H-1B requests by salary, beginning with the top wage level and descending.

By ranking and selecting H-1B visa requests by salary, it would increase the chances that employees in the top two wage levels will be chosen instead, the department said.

“Pure randomization does not serve the ends of the H-1B program or Congressional intent,” the filing says.

Once the proposal is published in the Federal Register, the public will have 30 days to comment before it is finalized. It’s unclear if the department would have time to finalize the proposal if President Donald Trump is not re-elected.

The proposal is part of the Trump administration’s crackdown on legal immigration, the latest in a series of policies and proclamations clamping down on work visas. It would also mark a sweeping change to the H-1B visa system, which has been in place since 1990, after the administration rolled out its first-ever preregistration system earlier this year.

If finalized, the proposed rule is likely to draw quick backlash from the technology industry, which relies heavily on foreign worker programs, as well as from higher education.

The proposed salary tier system would particularly target entry-level hires, such as foreign citizens who recently graduated from American universities, who would be less likely to win H-1B visas allowing them to stay and work in the U.S. under a salary ranking.

DHS’ new proposal also comes on the heels of two other policies aimed at restricting eligibility for work visas in the name of protecting American workers. Earlier this month, the U.S. Department of Labor put forth a policy, which has already taken effect, that would change how it calculates the wage requirements for foreign workers and raise the minimum salary requirements for H-1B employees.

For instance, under the higher wage tier, entry-level computer programmers on H-1B visas in Newark, New Jersey, would need to be paid $116,000 annually, up from the previous entry-level rate of $79,000 for that job, according to a lawsuit challenging the policy.

DHS also announced a policy tightening the criteria for individuals to qualify for H-1B visas that will take effect in December.

Both policies have been challenged in court by universities, business associations, and information technology companies.

In combination with these restrictions, Wednesday’s proposal “is simply meant to take a wrecking ball to the H-1B program,” Eleanor Pelta, who co-leads the global immigration practice at Morgan Lewis & Bockius LLP, said in an email.

She also warned that the proposed system will cause the U.S. to lose out on foreign graduates. “There is no correlation between the job and wage level of these workers and the availability of the workers in the U.S. labor market,” Pelta said. “As a perfect example, pharma companies hire statisticians and bio-statisticians — a clear shortage profession in the U.S. — to work on clinical trials and other drug development efforts. An entry-level statistician is a fully qualified professional, but this rule would make it essentially impossible for U.S. companies to hire these key employees directly out of their university programs.”