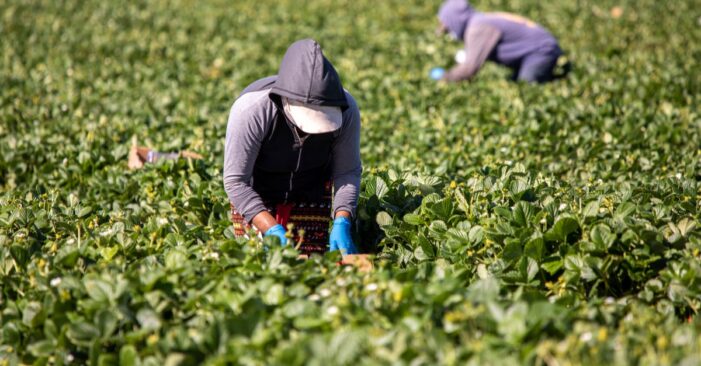 Processing delays for millions of foreign workers are aggravating the nation’s labor shortage, lawmakers and business groups say, putting the dysfunction of the immigration system on display at a pivotal time for the economic recovery.

More than 1.3 million employment authorization applications were pending before U.S. Citizenship and Immigration Services at the end of June, according to the latest data from the agency. On top of that, an estimated 1.5 million immigrants are waiting in line for employment-based green cards — many already in the U.S. on other visas — that would allow them to stay permanently, but only 140,000 are available each year.

The squeeze on foreign labor comes as the country’s working-age population has been declining and as businesses say they can’t find enough workers to staff their operations because of the pandemic. There were 10.4 million job openings in the U.S. at the end of September, according to the Labor Department.

“The processing issues are huge,” said Jon Baselice, vice president of immigration policy at the U.S. Chamber of Commerce. “That’s the most disruptive thing that I hear from companies on a regular basis.”

Processing delays slow down “all sorts of other things that a company has to do. So when they can’t get things processed timely, that means people have to be taken off the payroll,” Baselice said.

Foreign nationals already in the U.S. have been waiting for months — and in some cases, for over a year — to have their employment authorization approved or extended due to processing holdups at USCIS field centers, caused partly by the coronavirus pandemic. That’s forced some people, including asylum seekers, to quit their jobs in the U.S. after their work permits expired.

“These are folks who are working” and “who took jobs to support themselves and their families,” said Emma Winger, a staff attorney at the American Immigration Council. “Now, because of this delay, they’re losing their jobs. And many of those people were contributing to the economy and filling jobs that the U.S. really needs.”

Winger is representing an asylum advocacy group in a lawsuit over USCIS processing delays affecting health care workers, a truck driver, a fast-food manager and others.

The delays across the agency have also prevented USCIS from issuing green cards that would give foreigners the ability to work in the U.S. permanently, leaving thousands to expire this year.

The fight is now playing out in the debate over Democrats’ $1.7 trillion Build Back Better legislation.

The House version of the bill would recapture unused immigrant visas going back to 1992, freeing up 157,000 employment-based visas, according to an estimate from Democrats, in addition to roughly 262,000 family-based and diversity visa slots, which would also allow applicants to work.

It would provide temporary protection and work authorization to an estimated 7 million undocumented immigrants — including Dreamers and farmworkers — who are already in the U.S., which Democrats say will “accelerate” the economic recovery. The House version of the legislation would also provide $2.8 billion to help USCIS process those new cases and fix processing delays.

Some business groups agree, saying the immigration provisions in the bill are necessary to address labor shortages that are contributing to rising inflation.

“Immigrant workers are a critical component for calming the current hike in inflation,” the American Business Immigration Coalition wrote in a letter to the president and Democratic leadership this week. “Labor shortages result in construction delays, higher production costs, and lower inventory levels, which all lead to inflation.”

But anti-immigration groups have panned the provisions in the Democrats’ bill as providing “amnesty” to millions and warned that the changes could actually have a negative effect on the economy.

The Federation for American Immigration Reform, which pushes for lower levels of immigration, argued in an analysis of the Build Back Better act that “the sudden increase in the supply of legal labor generated by amnesty would likely further contribute to wage stagnation, giving employers even less incentive to raise wages.”

Robert Law, director of regulatory affairs and policy at the Center for Immigration Studies, said the money included in legislation won’t be enough to resolve USCIS’ backlog issues.

“There are so many structural problems within USCIS that, frankly, I don’t think that money would make much difference as far as reducing some of the processing times,” Law said. “There’s too much volume, there’s too many other obstacles.”

Democrats are already facing an uphill battle getting their broad social spending package through the Senate, where the bill’s immigration reform sections still need to be approved by the parliamentarian, who has blocked attempts to include immigration reform before.

Experts say the problem is two-fold, pointing to what they see as arbitrary caps on employment-based immigration, along with agency-wide delays in processing immigration documents.

Employment-based visas are capped at 140,000 each year and typically expire at the end of the year if they go unused. Under current law, people from any single country may only receive 7 percent of an annual pool of employment and family-based green cards. Immigrants from countries such as India, China, Mexico and the Philippines can face green card waits that span years.

“We’re just not issuing the number of visas that come up every year,” said Kristie De Peña, vice president for policy and director of immigration at the Niskanen Center, a libertarian think tank. “There are a lot of bureaucratic inefficiencies in the process. And when you pair that with the caps for certain countries, and the number of folks that are still trying to come from those countries all the time, you end up looking at backlogs that are a decade long in some cases.”

There are currently 1,551,864 employment-based green card applications stuck in the backlog, according to an estimate from David Bier, a research fellow at the Cato Institute. Roughly 850,000 of those workers are simply waiting in line to adjust their status, meaning they are already working in the U.S. on some other visa — which typically have limits on who foreigners can work for and for how long.

“There’s a massive backlog on these [work permit] applications, as with so many others, that we inherited and that we are working diligently to address,” said a USCIS official who requested anonymity to discuss the previous administration. “So we’re very much aware of both the economic and human cost of people losing their ability to work for no reason other than administrative delay. We know it’s happening. We know it’s continuing to happen. And we are determined to prevent that from happening as soon as possible for everyone in that position.”

The agency said it has tried to alleviate some of the backlog by temporarily suspending certain biometrics requirements for some groups and granting extensions of work permits, among other steps.

Immigration experts as well as the Biden administration say the problem has been made even worse by consulate and agency closures due to the pandemic, as well as policy changes made during the Trump administration that added hurdles for asylum seekers and immigrants to come to the U.S. and receive work authorization.

The Trump administration “cut resources to an already inadequately funded USCIS and created bottlenecks by creating bureaucratic obstacles,” according to the pro-immigration reform group New American Economy. “This led to unprecedented delays to the processing of immigration applications and higher rates of rejection for temporary worker visa applications.”

Dan Wallace, deputy managing director of the organization, said that from 2015 to 2019 there was a roughly 40 percent decline in migration to the U.S.

Researchers at JPMorgan wrote in a November report that the U.S. population is about 3 million immigrants short of where it would be if it continued on pace with pre-2017 trends, “a large majority of whom would have been of working age.”

That decline in immigration has been compounded by an extra 1.7 million people retiring during the pandemic, the researchers wrote, which could stunt the growth of the labor force and overall economic productivity.

“Immigration rates could eventually rebound, but we suspect this will be a slow process,” they said. “Meanwhile, the resident population will continue aging.”

The Census Bureau estimated that immigrants expanded the U.S. population by over 1 million in 2016, before falling steadily to about 480,000 by 2020, the JPMorgan researchers said.

“This is sort of the worst possible time for us to be experiencing a decline in immigration,” said Wallace, noting that immigrants are more likely to be working age and to have educational backgrounds that fit gaps in the labor force.