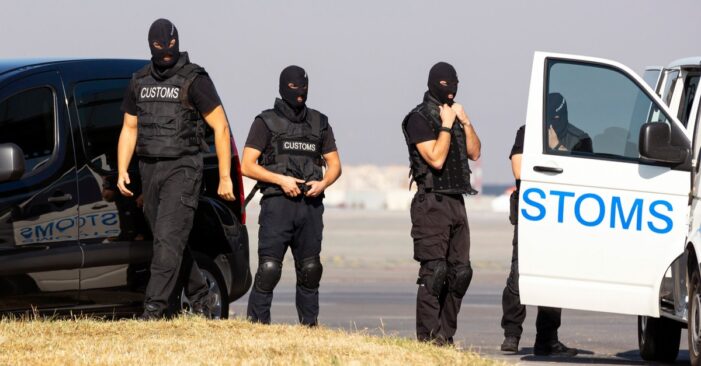 The Biden administration on Saturday halted its limits on immigration arrests to comply with a court ruling that took effect over the weekend, leaving deportation agents across the U.S. without any official instructions on which immigrants they should, and should not, detain.

The rules, part of a broader Biden administration effort to reshape ICE’s immigration enforcement functions, generally shielded unauthorized immigrants who arrived in the U.S. before November 2020 from arrest and deportation if they had not committed serious crimes.

But Republican officials in Texas and Louisiana earlier this month convinced a federal judge to set aside Mayorkas’ rules on the premise that he lacked the authority to issue them. U.S. Judge Drew Tipton, who was appointed by former President Donald Trump, also said Mayorkas’ memo was improperly enacted.

Tipton agreed to pause his ruling to give the administration time to appeal, and the Justice Department asked the Fifth Circuit Court of Appeals to suspend his order. But the appellate court did not issue a decision on the government’s request before Tipton lifted the pause on his ruling on Saturday morning.

In a statement to CBS News on Saturday, the U.S. Department of Homeland Security said it “strongly” disagreed with Tipton’s order, but that it was complying with it.

“During the appeals process, ICE agents and officers will make enforcement decisions on a case-by-case basis in a professional and responsible manner, informed by their experience as law enforcement officials and in a way that best protects against the greatest threats to the homeland,” the department said.

While the suspension of ICE’s arrest prioritization scheme is unlikely to place the country’s estimated 11 million unauthorized immigrants in immediate danger of being arrested, the absence of national standards could lead to inconsistent enforcement actions across the U.S., including arrests of immigrants whom agents were previously instructed not to detain, legal experts said.

Muzaffar Chishti, a senior fellow at the non-partisan Migration Policy Institute, said ICE agents will still have law enforcement discretion to decide whether to make arrests. But he said agents will no longer be barred by national rules from arresting immigrants whom the Biden administration sought to shield from deportation.

Without national rules, Chishti said, there will likely be significant “variations” in how different ICE field offices carry out arrests. ICE officials in Atlanta, for example, could try to maximize arrests, he added.

“Individuals in jurisdictions which have historically been more prone to enforcement have more to fear now than those in jurisdictions that have a more balanced approach toward enforcement,” said Chishti, who leads the Migration Policy Institute’s New York office.

Representatives for ICE and DHS did not provide additional details on how agents will decide whether to carry out arrests in the absence of enforcement priorities.

The memo suspended over the weekend is part of a series of rules the Biden administration has issued to narrow the groups of immigrants subject to ICE arrests in the interior of the country. Under President Biden, ICE has been instructed to generally avoid detaining families with children, pregnant or nursing women, victims of serious crimes and U.S. military veterans.

The Biden administration has also discontinued large-scale ICE arrests at worksites and expanded the list of so-called “protected areas” where deportations agents should generally not arrest immigrants to include disaster sites, places where children gather and social services establishments.

Mr. Biden’s appointees have argued the policy changes allow ICE’s 6,000 deportation agents to use their finite resources to arrest immigrants who endanger public safety or national security. Republicans, however, have denounced the rules as too restrictive and argued that they encourage illegal immigration.

The court ruling blocking the ICE enforcement priorities is the latest judicial victory for conservative states that have sought to hinder Mr. Biden’s immigration and border policies.

Through multiple lawsuits, Texas and other Republican-led states have forced the administration to scrap an 100-day deportation moratorium, close the Deferred Action for Childhood Arrivals (DACA) program to new applicants and revive a Trump-era policy that requires migrants to await their asylum hearings in Mexico.

In May, a federal judge granted a request by more than 20 Republican-led states and ordered the Biden administration to continue using a public health law first invoked under Mr. Trump to rapidly expel some migrants from the U.S.-Mexico border. The administration had argued the emergency policy, known as Title 42, was no longer needed to control COVID-19.