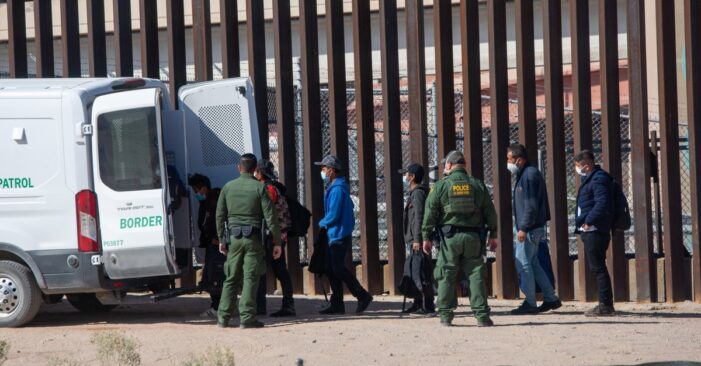 Group of migrants surrenders to a border patrol agent after crossing the border between Mexico and the United States. – Juárez Chihuahua Mexico 11-22-2021

Despite a strong start in early 2021, the border is in many ways not any better than when Biden took office. At the end of 2021, seeking asylum is more difficult than it’s been in years.

Initial Progress Is Met with Setbacks
In his initial weeks in office, Biden suspended the so-called Migrant Protection Protocols (MPP, also known as Remain in Mexico), created a task force to reunite separated families, and issued an executive order meant to address root causes of migration and rebuild access to asylum. He also terminated several anti-asylum programs which had been on hold since the start of the pandemic, such as the “safe third country” agreements with Guatemala, Honduras, and El Salvador.

However, at the time Biden took office, border apprehensions had been rising for months thanks to the Trump administration’s use of Title 42 and the ongoing economic shocks caused by COVID-19. A series of devastating hurricanes that demolished entire communities in Guatemala, Nicaragua, and Honduras exasperated the situation. By fall 2020, border apprehensions were already at the highest levels for a fall in 15 years.

During 2020, the rising number of people coming to the border primarily consisted of single adults, as opposed to families and children. But within weeks after Biden took office, many asylum seekers, hoping for a better reception than under President Trump, began arriving at the border.

The Biden administration quickly insisted that it would not abandon Title 42. President Biden also declared that he would expel all families if he could. However, because Mexico blocked the Biden administration from expelling back to Mexico most families with children under the age of 7, the number of families allowed into the U.S. rose.

Shortly after the administration took office, the number of unaccompanied children seeking protection also spiked. This led to thousands of children being stuck in squalid Border Patrol facilities. Media organizations declared a major border crisis was going on.

Caught off guard, the Biden administration surged resources to the border and erected “emergency influx shelters.” Within a couple months, the administration had ensured that children were not kept in Border Patrol custody for more than 72 hours. However, the state of the emergency influx shelters was at times not much better than Border Patrol custody, and many children languished in poor conditions for months.

Despite these early struggles, progress continued to be made in dismantling many of Trump’s anti-asylum programs. In February, the administration began “winding down” MPP. Eventually, more than 13,000 people received permission to reenter the country and seek asylum in safety. In June, Attorney General Garland rescinded decisions from Attorneys General Sessions and Barr that had made it more difficult for victims of domestic or gang-based violence to seek asylum. And in September, a federal court ruled that Customs and Border Protection’s practice of “metering” asylum seekers at ports of entry was illegal.

Progress Begins Reversing
Things at the border began taking a turn for the worse over the summer when border apprehensions spiked to near record levels. Although the Biden administration initially indicated in July that it would lift Title 42 and allow asylum seekers to come into the country without being expelled, the arrival of the Delta variant and infighting within the administration blocked that plan. Even a plan to vaccinate migrants was reportedly blocked by high-level White House officials over fears that it might somehow be viewed as a “pull factor.”

In May, the Biden administration announced a new “dedicated docket” court process for asylum-seeking families, which prioritizes the cases of recently arrived migrants. Although the administration said the docket was not designed as a deterrent, the policy looked very similar to previous “rocket dockets” created under Presidents Obama and Trump.

Then in August, a federal court in Texas issued a stunning decision holding that the Biden administration’s termination of MPP was illegal. The court ordered for it to be reinstated. Attempts to temporarily put that on hold were blocked in the Supreme Court, and the Biden administration began the process to resume MPP. Weeks later, the administration halted a short-lived process where NGOs could help people apply for exceptions to Title 42 and seek asylum at ports of entry.

Soon after these setbacks, the Biden administration faced another moment of public outrage—this time over treatment of thousands of Haitian asylum seekers arriving in Del Rio, Texas. Disturbing images of Border Patrol agents on horseback running down Black migrants flashed across the world. The Biden administration promised a swift investigation, which has not happened yet.

Despite internal admonishments that expelling thousands of Haitians could violate international law and two high-profile resignations, the Biden administration chose instead to “send a message” by expelling 7,500 people to Haiti in a matter of days.

Over the course of the fall, the administration abandoned any pretense of reversing Title 42 and began the process of reinstating MPP. On December 13, the 5th Circuit Court of Appeals upheld the decision ordering the Biden administration to reinstate MPP. In an unprecedented move, the 5th Circuit ruled that MPP was required by a 1996 law—even though it did not exist before 2019. Given this outcome MPP will likely remain in place for months, if not years.

Looking Forward Into 2022
At the end of Biden’s first year in office, the border does not look much different than it did at the start of his term. Nearly all paths to asylum remain shuttered, MPP is back, and a record number of people have died crossing the border in the last year.

In 2022, the Biden administration will have the opportunity to make a series of regulatory changes which may eventually reshape the asylum process at the border. One such proposal includes speeding up the asylum process be sending some people to U.S. Citizenship and Immigration Services for an initial hearing on an asylum claim before a judge gets involved. The Biden administration also has yet to publish a regulation required by executive order that would expand access to asylum for victims of gender-based violence. Unfortunately, these regulations may not go into effect for years.

But as the Del Rio mass expulsions show, the administration’s current focus on sending a deterrent message will likely prevent any major shifts in favor of humanitarian processing at the border.