The Global War on Information: Journalists Under Fire 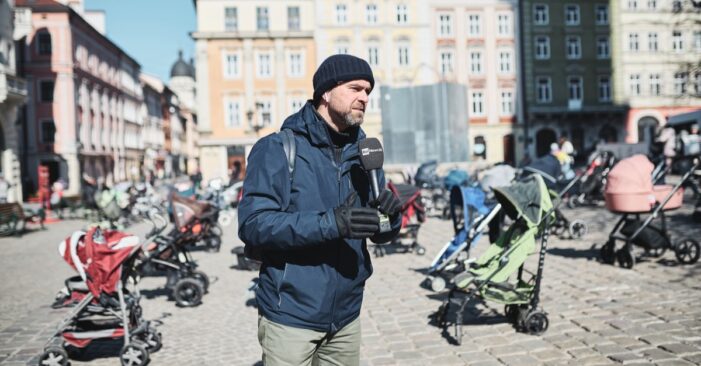 Lviv, Ukraine – 03.18.2022: The journalist gives an interview to the press on the topic of killing children during the war in Ukraine. (Shutterstock)

In a white paper by the International Federation of Journalists, since 1990, over 2650 journalists have been killed. The fallout from the crossfire of the Global War on Information has taken the form of intimidating journalists, the withholding of internet accessibility in many countries, and propaganda campaigns on social media.

Over the years, the public’s opinion about media and journalism has gradually dwindled from tarnished personalities, and news no longer can be trusted even in America.

Consequently, resulting in repercussions, which formed the basis for the discussions among experts and professionals in journalism moderated by Pilar Marrero, a professional journalist.

Causes and Effects of the Attack on Journalists
Carlos Martinez de la Serna, the Program Director of the Committee to Protect Journalists, attributed the global war on information to various crises worldwide. In his view, press freedom is hampered by numerous situations ranging from political and global health crises and government changes to environmental problems. “Governments enact different laws to stifle journalism, to control information,” he observed.

He further observed that killings in Mexico and imprisoning journalists that investigate corruption create a chilling effect at different levels, impacting the global community of journalists and news organizations. Unfortunately, the killing of journalists remains a mystery and often takes place with impunity.

In 2021, over 47 journalists were jailed on false news charges, and new laws have been introduced in several countries specifically designed to target journalists and control information. Consequently, the global crisis and attack on journalism have resulted in a growing community of journalists in exile. “We have journalists reporting on their countries based elsewhere because they cannot do that work within the countries,” lamented Martinez de la Serna.

Impact of Social Media and Alternative Information on Journalism
There is reportedly a direct link between journalists’ use of social media to connect with audiences and compromise on physical safety to compound the situation. More journalists involved in investigative reporting on corruption or facing a repressive government are often affected. They must be more careful while carrying out their duties because of personal threats to them and their loved ones since their personal information can be found on the internet if not adequately guarded.

Secondly, social media is also used to promote false news deliberately. In contrast, politicians and other influential personalities use the medium to discredit journalism.

“One is the deliberate creation of propaganda trying to resemble real news. Those would be the real false news. Most politicians worldwide undermine journalism by trying to classify it as false every time there’s something they don’t like about it,” says Martinez de la Serna.

Challenges of Journalism in Africa
Around the world, journalists and press freedom are under pressure. There are documents detailing the global attack on journalists in Africa. For instance, Journalists in the Republic of Benin are prosecuted and jailed under a criminal code for ‘perceived’ wrongful publishing or online distribution. Other locations like Sub–Saharan Africa and North Africa are also hotspots for journalists.

Over time, several journalists have been imprisoned, harassed, and falsely accused in North Africa, specifically Morocco. Tunisia, a country formerly with a positive reputation for developing democracy and press freedom, has taken a nosedive. At the same time, Egypt has maintained its standing for jailing journalists over the years.

Martinez de la Serna explained that the gradual loss of democracy in countries is the leading cause of the loss of press freedom. “And if we go from North Africa to sub-Saharan, I could keep highlighting various crises, but I would say that the common theme is the backsliding of democracy. We used to have some good cases in the region, like Tanzania, Mozambique, and Ethiopia. That’s no longer the case,” he explained.

Despite the challenges, he recommends that journalists maintain their integrity by being on the ground, which helps combat negative perceptions. “The first thing I would do is engage directly with the communities we aim to serve. We cannot be in our offices or in a world that is not fully immersed in the problems we are trying to report on and help,” he emphasized.

Challenges of Journalism in the Americas
The issues confronting Journalists in Latin America were addressed by the Executive Director of the Inter-American Press Association, Ricardo Trotta, who noted that crimes against journalists on the continent are increasing.

In the first quarter of 2022, over twelve journalists were killed in the Americas, eight in Mexico, two in Haiti, one in Guatemala, and one in Honduras. Some of the leading causes are attributed to the effect of widespread violence, organized crime, and drug trafficking with support from corrupt government officials, police, and paramilitaries.

Furthermore, factors like impunity, misuse of power, lack of adequate resources, press freedom, and access to information have increased the killing of journalists. Trotta explained that “Most murders occur in the countries’ interior where the government is less present or more corruption.” He added that “The protection systems do not work in these countries. They are weak and do not have sufficient human and economic resources to operate.”

According to Trotta, “In Nicaragua, the Ortega Murillo’s regime has imprisoned journalists, jailed opponents in recent months, and closed media outlets such as La Prensa, while outlets like Confidencial publish from exile.” Presently, over 150 journalists are in exile, he said. “Journalists are detained and persecuted. They cannot move freely in their territory. And they are invited to escape from the country. ”

In Venezuela, the media is experiencing suffocation from economic measures and direct censorship. “Maduro closed, confiscated, and stole the asset of more than 115 media outlets, including El Nacional, the major newspaper in that country.” He explained.

The police have reportedly closed the media outlet and asked the newspaper to pay a millionaire sum to Diosdado Cabello. “He’s the second in charge, and he felt offended because of some publications by El Nacional that claimed he was part of a cartel.” Trotta continued

“Another problem is the widespread lack of sustainability for the media.” For the last couple of decades, aggravated by the pandemic, the most critical revenue from advertising has migrated to larger platforms.” Trotta said.

The Killing of Journalists in Mexico
Using Mexico as a case study, several factors like inadequate protection for journalists, violence, lack of resources, and location lead to a trend of self-censorship among the journalists.
Trotta explained, “In many countries in Latin America, journalists are killed in the country’s interior. They are not killed in Mexico City or Bogota, Buenos Aires, where the state has a strong presence, and the judicial system works better than its interior.”

Despite all the challenges, including underpaid journalists, the proliferation of fake news, as evidenced during the pandemic, has made audiences yearn for the truth and are willing to pay for high-quality journalism.

“And media, maybe in some places, cannot pay what a journalist deserves. I believe there is a revalue of the profession because of the significant events like fake news, the pandemic, and the war. So, people are getting used to seeking more trusted sources, and that’s a positive side of our profession.” Trotta observes.

Experience of Journalists from Eastern Europe
“Not everybody knows that war did not start months ago in Ukraine between Russia and Ukraine. It’s been for a while,” says editor-in-chief of Slavic Sacramento, Ruslan Gurzhiy. As a Russian-speaking journalist, he revealed that he has been experiencing a lot of threats even in California due to his work.

He recalls being surprised when he reported the threats to law enforcement in California and was told, “we don’t care about that unless we see your body, especially if you’re outside of the country.”

Gurzhiy explained that as an international journalist, he covers stories across the globe, from countries connected to local Diaspora and communities, across Sacramento, Bay Area, San Francisco, L.A., Portland, New York, and Miami. “All these people are reading our news because they don’t want to listen to Russian propaganda or disinformation outlets from Moscow-based stations.”

However, he often struggles with the lack of resources, knowledge, and inadequate staff to engage with the community and provide correct information.

He recalls some of the attacks against journalists date back to the Soviet presidential election. “And recently when the war started, in Ukraine, we get banned in Russia along the Novaya Gazeta, Voice of America, other Western outlets and local outlets. The Kremlin knows us because we carried out a lot of investigations about the Russian invasion here in California.”

He concludes that no one wants to talk about the issues, primarily about journalists who got killed in Ukraine. “I know one of my friends told me recently from Kyiv that one or two American citizens got hijacked by Russian authorities and occupied territories. One of them never came back. And I have a lot of stories about people disappearing in Ukraine.”

So, despite living in the US, he feels threatened because of the investigative pieces he has done over time. “People are getting a lot of threats from the local community in California,” Gurzhiy shared. He attributed the problem to the language barrier. “We don’t have references, and some people don’t speak English. Members of the Slavic Communities have threatened me. And they are suing us for defamation because they have money.”

Propaganda news has taken over, and the Chinese government has expelled most of the bureaus and journalists from top media outlets like the New York Times and Wall Street Journal.

Goldkorn explained that “Foreign journalists get harassed on reporting missions, are prevented from reporting, and interviewing people.” Interestingly, the average Chinese person also harasses journalists. “Not because the government encouraged them to, but because they think that foreign journalists are somehow misrepresenting China,” he lamented.

Therefore, many Chinese journalists have been jailed, left the profession, or carried out less controversial jobs like writing press releases.

Like the Slavic community in the Diaspora, there are complications within the Chinese diaspora community. A complex situation consisting of people with different loyalties – the older generation of Chinese immigrants prefer media that is unsympathetic to the Communist Party of China. In contrast, the newer immigrants and media companies are either directly supported by the Chinese government or depend closely on Chinese businesses for advertising.

They have professional relationships that make it difficult and awkward for them to discuss happenings in China truthfully. Then, another group of organizations is funded by one category of dissidents and by one particularly influential organization, Falun Gong. A religious organization with a significant media presence worldwide but is banned in China and a sworn enemy of the Chinese Communist Party. All of these groups are vying to be heard.

“As a journalist working in the United States covering China and the Chinese community, if you are seen as anti-China, your media can get boycotted by businesses and people associated with you,” said Goldkorn.

Unfortunately, he added that social media had become an extremely toxic place for journalists, whether pro or anti-China. Another major challenge many ethnically Chinese reporters face is being accused of being a ‘race traitor’ irrespective of their standpoint.

The experts proffered a few suggestions to tackle the situation, which include:

It is fair to say that Journalists and journalism are crucial to building any society; however, journalists have become key targets of intimidation and even murder. Thus, audiences must understand the challenges, vulnerabilities, and the courage it takes to operate at a time like this. Therefore, they must be appreciated and supported. The threats and dangers are no longer limited to a particular location because the internet has become a thriving source for intimidating professionals.

In the words of the Director of Ethnic Media Services, Sandy Close, “Covering your community is as dangerous as covering what we think of as the establishment or the people in power.”