Some Notable Details From the Federal Indictment of Lt. Gov. Brian Benjamin 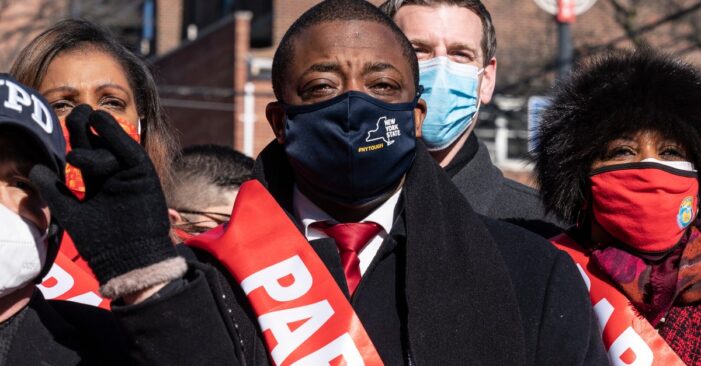 A 23-page indictment outlines what federal prosecutors mean when they say Lt. Gov. Brian Benjamin is a key actor in “a simple story of corruption” involving himself, his 2019 campaign for New York City comptroller and real estate developer Gerald Migdol, who is referenced as “CC-1” in the document.

The document alleges Benjamin, then a state senator representing Harlem, committed five criminal counts related to a scheme, reported by The City last November, to steer government grants to Migdol in exchange for strawman donations to his comptroller campaign in a way that would maximize public matching funds. Benjamin then made moves to cover up the alleged conspiracy, prosecutors say.

Benjamin – who resigned Tuesday effective immediately – has pleaded not guilty to all charges amid growing calls for his resignation following the release of an indictment that includes numerous unflattering details, especially considering his recent denials of wrongdoing alongside Hochul.

Here are some of the highlights from the indictment.

Page 4 – Benjamin allegedly asked Migdol to help with campaign fundraising even though Migdol told the aspiring city comptroller he wasn’t good at that type of thing.

On or about March  8, 2019, Brian Benjamin, the defendant, attended a meeting at (Migdol’s) residence … Benjamin intended to run for the office of New York City comptroller, and that Benjamin wanted (Migdol) to procure numerous small contributions for his comptroller campaign. In response, (Migdol) told Benjamin, in substance and in part, that (Migdol) did not have experience bundling political contributions in this manner … and that (Migdol’s) ability to procure contributions for Benjamin’s Comptroller Campaign was limited.

Page 7: State Senate Majority Leader Andrea Stewart-Cousins was referenced in the indictment in relation to a state Senate resolution involving a grant to a charity controlled by Migdol.

Page 11: Benjamin allegedly had a side hustle as well as a real estate fixer for Migdol.

On or about October 21, 2020, during the course of and as part of their corrupt relationship, Brian Benjamin, the defendant, called (Migdol) and said, in substance and in part, that if (Migdol) contributed $15,000 to a particular political campaign committee… , Benjamin would help (Migdol) obtain a zoning variance permitting construction on a property owned by (Migdol) in Harlem. In prior discussions, Benjamin and (Migdol) had discussed that obtaining a zoning variance would involve, among other things, seeking approval from the local community board … , of which Benjamin had previously served as chair.

Page 12-13: Benjamin seemingly questioned whether he really had to disclose the owners of a limited liability company that donated to his comptroller campaign despite a notification from the state Board of Elections.

In or about January 2020, a member of Benjamin’s staff sent Benjamin an email listing LLCs for which disclosures were necessary, specifically identifying the (Migdol) LLC as being associated with (Migdol) …  Within minutes, Benjamin responded and asked, “What happens if someone refuses to provide the information?” Ultimately, although the Senate Campaign provided the BOE with ownership information about certain LLCs not associated with (Migdol), it never provided such information about the (Migdol) LLC.

Page 14: Benjamin allegedly called Migdol right after filling in a form while getting vetted to become lieutenant governor.

Benjamin submitted an executive appointment questionnaire to the New York State Office of General Services addressing, among other things, his relationships with political contributors …  Benjamin falsely stated, among other things, that he had never “directly exercised [his] governmental authority (either as a Legislator or Executive official) concerning a matter of a donor [he] directly solicited.” Approximately two hours after Benjamin submitted the questionnaire containing that false response, he called (Migdol) for the first time in six months.

Page 14-15: Benjamin allegedly gave false information on the forms on a second go-around.

On or about November 29, 2021, following public reporting that questioned the accuracy of certain answers that Brian Benjamin, the defendant, had provided in the questionnaire, Benjamin submitted an amended questionnaire changing certain answers and including an addendum with additional responses. In his amended questionnaire, Benjamin again falsely stated that he had never “directly exercised [his] governmental authority (either as a legislator or executive official) concerning a matter of a donor [he] directly solicited.” Moreover, in the addendum, Benjamin falsely added that while he regularly voted on legislation with broad implications, he was “not aware of any specific matter that related to a particular donor.”