ICE Spread COVID-19 Across the Country, Not Just in Immigration Detention Centers 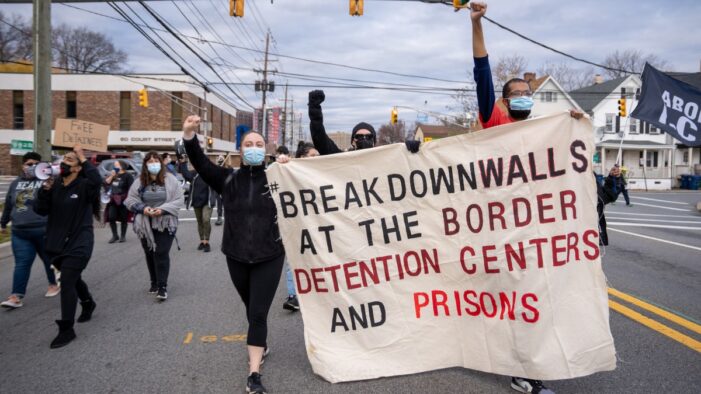 U.S. Immigration and Customs Enforcement (ICE) mishandled the coronavirus outbreak in detention centers so badly that it not only lead to horrific conditions and deaths among people in its custody, it is also responsible for the spread of COVID-19 in surrounding areas.

A recent New York Times investigation emphasized that ICE’s practice of transferring thousands of people around the country during the pandemic was responsible for the increased spread of COVID-19 in communities with detention centers in them. A lack of testing, inability for people in detention to socially distance or take other precautionary measures, and inconsistent tracking all contributed to outbreaks of the virus.

ICE has reported over 12,000 cases of COVID-19 inside its facilities since the pandemic began. But the numbers are likely much higher, as in the early months of the pandemic ICE officials refused to test many people out of fear that an outbreak would require them to release people. Infection rates in immigration detention centers have been 20 times higher than the national average and 5 times higher than prisons.

The consequences of ICE’s inaction were devastating, fueling cases in both detention centers and the communities that surround them. But despite these clear consequences, ICE resisted major changes throughout the pandemic, leading to federal judges ruling that ICE had been deliberately indifferent to the health of those it was detaining in certain detention centers.

Earlier this month, DHS Secretary Mayorkas terminated the contract of one such facility in Bristol, Massachusetts, citing the fact that only 7 people were being detained there, as well as the facility’s history of abusive conditions. DHS also announced plans to discontinue the use of the notorious Irwin detention center in Ocilla, Georgia that is the subject of ongoing investigations relation to egregious medical abuse.

The new investigation makes clear that ICE should be quickly drawing down the number of individuals in its custody and safely releasing more people to reduce the spread of COVID-19 and has had the lawful discretion to do so since well before the start of the pandemic in March 2020.

Unfortunately, the opposite is happening. ICE detention numbers have been increasing since President Biden’s inauguration, topping 22,000 people as of May 21, 2021. This is nearly a 50% increase from the end of President Trump’s time in office.

With detention numbers increasing, and the knowledge that ICE’s actions have made detention centers epicenters for the spread of COVID-19, DHS still has no plan to widely vaccinate people in detention. Vaccination efforts have instead been left up to local governments.

At a recent hearing in front of Congress, Acting ICE Director Tae Johnson testified that just 20% of people in ICE detention have been vaccinated, a rate far lower than the rest of the country.

Members of the Colorado congressional delegation are trying to change these disturbing trends, introducing a bi-cameral bill to restrict ICE’s ability to transfer people between detention centers. The bill would also require detention centers to release people if CDC guidelines cannot be met.

This is the only humane solution to the dangers immigration detention poses to communities, particularly in the time of COVID-19. Advocates have been calling for DHS to increase its use of alternatives to detention–particularly community-based programs. Data indicate that detention is not necessary to ensure that an immigrant will appear for court.

Over a year into an historic pandemic, the largest immigration detention system in the world still does not have a plan to keep the people in its custody and in surrounding communities safe. The rising number of people in detention is of significant concern. DHS can and should release people from detention and continue to close detention centers to avoid continuing to spread this deadly disease.