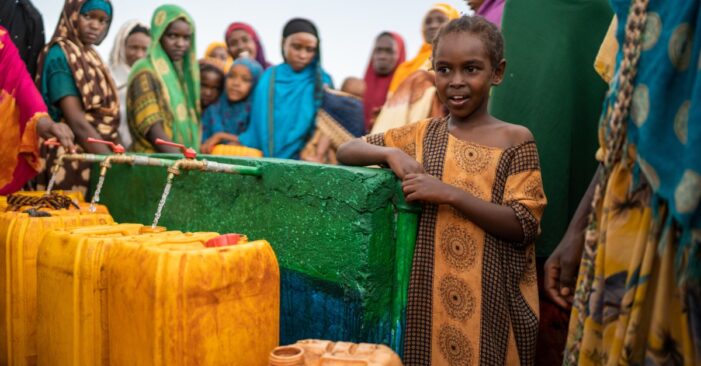 Baidoa, Somalia May 15, 2019: Women and children who are prepared to carry water and carry water on their heads. (Shutterstock)

The United Nations warns that over twenty million people will be at risk of starvation in 2022. They link it to delayed rains, lack of international aid, and drought in the Horn of Africa (Kenya, Somalia, and Ethiopia). Presently over 28 million people across the three East African countries face high levels of food insecurity due to the prolonged drought and desperately need food assistance. The devastating drought envelopes most of Somalia to neighboring Kenya, where the lack has left people short of food.

In Somalia, half of the 12 million population, nearly a third of the population, faces an extreme food crisis and potential famine as the current conditions prevail. Dead livestock litters the country’s southern region, while many animals die. The northern communities in Kenya have over 3 million people on the brink of a hunger crisis, with over 1.3 million dead livestock, leaving them in a similar fate as Somalia. Many Kenyans within the communities need emergency food aid to survive.

Ethiopia’s drought-laden southern and southeastern areas are dealing with an increased malnutrition rate, as over 6 million people face starvation. Sadly, the war in the northern part of the country between government forces and Tigrayan rebels has worsened the situation, as aid cannot reach people in the region.

According to experts, over 7 million people in South Sudan might also experience food insecurity in the next few months if the drought conditions prevail. The authorities within the region shared their assessment. “Already, 16 million of our brothers and sisters need immediate food assistance due to the drought, ” said Dr. Workneh Gebeyehu, Executive Secretary, Inter-Governmental Authority on Development (IGAD).

The Root of Hunger
Natural causes like inadequate rainfall have remained over four seasons in the region. Based on IGAD’s Climate Prediction and Applications Centre (ICPAC) analysis has contributed to the dire situation. According to Dr. Guleid Artan, ICPAC’s director, “the severe shortages in water and pasture lead to smaller food production, significant losses in livestock and wildlife, and a rise in the resource-based conflict in the region.”

Other factors include the combination of the impact of COVID-19 and conflicts in the region and eastern Europe, all accumulating to the severe levels of food insecurity across the region. The conflict between Russia and Ukraine has contributed to the high cost of food and fuel and a disrupted supply chain worldwide.

The two European countries are some of the region’s leading suppliers of agricultural commodities – soybeans, wheat, and barley. According to the food and Agriculture Organization, Eritrea is one of those countries whose wheat supply is solely from them.

Experts also alluded to the frequent and intensified extreme weather events to climate change. According to scientists, there is a stronger relationship between the planet getting warmer and the changing weather patterns, such as drier droughts, hotter heat waves, greater snowfall, and more significant storm surges.

In the case of East Africa, the continuous high temperature and humidity result in heat waves that cause the death of livestock when it persists for more than a few days. They explain that higher temperatures increase evaporation, which dries out the soil and intensifies drought over many areas.

The outlook, based on the region’s early warning systems and indicators, shows a worsening situation as the year unfolds, leaning towards a humanitarian crisis. Consequently, vast numbers of people are being forced to migrate from their homes in search of survival – food and water to major cities.

Migrating Somalis and the Flight from Hunger
Take Somalia as a case study; in 2011, over 200,000 people died, including children. This number is estimated to quadruple by 2022. Over 4 million Somalis are already facing severe food insecurity.

As the drought emergency intensifies, the number of people affected increased from over 3 million in 2021 to the present number. It will keep growing, except there is some form of aid. The women leave their homes with sick and malnourished children, searching for survival. Their first stop is the Internally Displaced Persons (IDP) camps.

Aden Farah, Humanitarian Advisor for Save the Children in Somalia, reports that over 670,000 people have become IDPs due to the drought.

While in some of the Kenyan counties, which have been hard hit, over 800,000 people are facing starvation. The nonfunctional boreholes from poor routine maintenance aggravate the situation.

Overall, many communities across the East African region are confronting a similar situation of below-average rainfall. The hardest hit is herders to small-scale farmers. Hence, harvests are at the lowest in decades. The number of malnourished children increases, and many families are moving to find help.

Request for Support
While the whole world focuses on the war in Ukraine, a humanitarian war rages. Many international agencies are still appealing for help from international partners and donors to help the East African governments combat the natural disaster in the region. These countries declared the drought a national disaster; and have sought aid to help them deal with the developing crisis and improve food security in the region. During the 2021 United Nations Climate Change Conference (COP-26), developing countries made promised some financial commitments towards developing countries to help them alleviate the disaster. The pledge has not been honored. According to the Manager of UNDP Resilience Hub for Africa, Alessandra Casazza, the developed countries promised to donate $100 billion to developing countries to deal with climate emergencies like drought.

Sadly, while Ukraine receives aid to defend itself against Russia, it is at the cost of other equally essential missions. No adequate attention has been paid to fulfilling the promises that affect different humans in that part of the world. AP News Agency reports that Oxfam, an international organization warns that the hunger crisis could swiftly become a tragedy. Suppose aid does not reach the most vulnerable in the region? However, the organization’s Executive Director, Gabriela Bucher, says, “The brutal truth is that at the moment, East Africa is not on the global agenda.”

Thus, a combination of the drought dried up rivers and the war in Ukraine is fast becoming a recipe for a monumental disaster. Despite the warning and appeal from agencies like the UN, whose appeal only raised just 3 percent of the total sum developing countries had promised. They are worried that the lack of funding and urgent scaled-up support could trigger a greater disaster if not addressed over the coming months. Based on previous experience from 2017, early intervention in East Africa during a similar drought prevented a looming a humanitarian disaster in the form of a famine.

However, this might become a reality as the world focus on the ongoing war in Europe. At the same time, the necessary support from international donors like the USA — who are committed to supporting the COP-26 mission —remains unfulfilled.

The lives of millions of people are dependent on this support, and they could potentially die this year due to the hunger crisis. In an article by the New York Times, Oxfam International’s Executive Director, Gabriela Bucher, explained, “The conflict in Ukraine is compounding an already complicated situation in East Africa. East Africa is not on the global agenda now, but the region needs the international community’s solidarity, and it needs it now.”