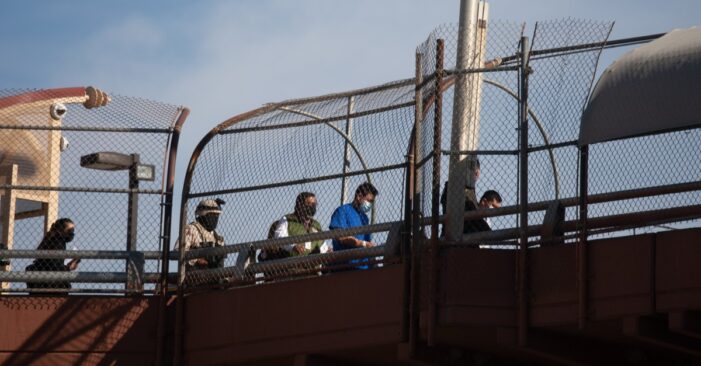 Two men were returned to Mexico under the Migrant Protection Program (MPP) policy, they will await their political asylum process in Mexico. – 12-08-2021 (Shutterstock)

By Mychael Schnell, The Hill

The U.S. has returned two migrants to Mexico under the “Remain in Mexico” program, marking the first time the Trump-era policy has been enforced during the Biden administration.

The International Organization for Migration (IOM) announced in a statement on Thursday that two migrants reentered Mexico through a border crossing in Ciudad Juarez, which is across from El Paso, Texas.

A Customs and Border Protection spokesperson confirmed to The Hill in a statement that the Department of Homeland Security (DHS) started the reimplementation of the program in one location on Monday.

The agency, however, said it would not share additional details, including the location of the return or the number of migrants returned, because of “operational security reasons.”

The return marked the first time the controversial program has been imposed under President Biden, just days after the administration announced plans to resurrect the policy following a court order compelling it to revive the scheme.

The Supreme Court in August sided with a lower court decision that ruled in favor of Texas and Missouri in a fight to reimplement what was initially known as the Migrant Protection Protocols (MPP).

The policy, which was first implemented under the Trump administration before being rescinded on Biden’s second day in office, requires asylum-seekers to stay in Mexico while awaiting immigration proceedings in the U.S.

A Mexican official confirmed that the policy was restarting, but noted that the only migrants sent back on Wednesday would be the two, according to Reuters.

The IOM said the two migrants were tested for COVID-19 when they reached Mexico, then officials with the group transported them to a shelter in Ciudad Juarez that has been accepted by both the U.S. and Mexico.

The group, which is supported by the United Nations, also made a call for the controversial program to be terminated, writing in a statement that it is “inhumane and contrary to international law,” according to Reuters.

A senior Department of Homeland Security official said earlier this month that the U.S. will help coordinate housing for asylum-seekers and provide transportation for migrants to and from entry locations for when they need to return for court hearings.

Generally speaking, however, the main parameters of the policy remain largely the same.

A DHS spokesperson told The Hill in a statement that the department is “closely coordinating the court-mandated reimplementation of MPP with the Government of Mexico to address security concerns and operational constraints.”