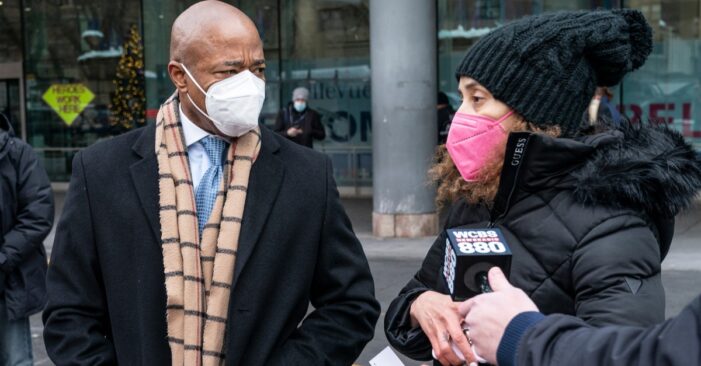 By Yoav Gonen and Rachel Holliday Smith, THE CITY

Mayor Eric Adams is facing a potential second loss in his administration’s bid to wield power within the City Council — this time in a battle over appointing the chair of the oversight and investigations committee.

Naming its new leader for the influential committee — which has subpoena power — was a top ask from Adams’ team after the mayor’s top choice for Council speaker agreed to cede that race to winner Adrienne Adams (D-Queens), multiple sources said.

The mayor had backed Councilmember Francisco Moya (D-Queens) in a losing bid to have influence over the Council, which creates laws, negotiates the city budget with the mayor’s office and has oversight of city agencies.

Among the requests from Mayor Adams was to have Moya supporters appointed to chairmanships over roughly one-third of the council’s committees — including oversight and investigations, public safety and education, according to two sources familiar with the negotiations.

The committee chairs are assigned at the sole discretion of the speaker, but likely with input from top members, labor leaders and the county committees that backed her bid to oversee the City Council.

But the sources said that returning Manhattan Councilmember Gale Brewer, who has a reputation as a by-the-books official with strong independence, is likely to be named chair after dropping her own candidacy for speaker to back Adrienne Adams.

“They’re smart to push back on Gale because she’s independent and smart,” said one City Council source. “If you have a smart, ambitious worker [chairing that committee], they can cause a lot of drama for your administration and keep you on your heels.”

Multiple sources said Mayor Adams is poised to get his wish on many of the other committees — including public safety, education and a new finance committee focused on coronavirus-related spending — although the decisions have yet to be finalized.

Senior advisor to the mayor Stefan Ringel said the campaigning had ended and that Mayor Adams is governing in partnership with Speaker Adams.

“It is not our practice to comment on internal conversations, other than to say the mayor and speaker have a productive partnership that respects the independent leadership of the City Council,” he said.

Menin didn’t immediately respond to a request for comment, while Brewer said she doesn’t know if she’s the top contender for the position.

“I have a lot of city experience,” said Brewer. “I know the agencies and I think I’m always a good leader on finding ways that government can be improved.”

In her previous terms as a City Council member between 2002 and 2013, Brewer chaired three Council committees, for technology, general welfare and government operations. In that time, she successfully pushed for legislation requiring open data in city government.

Asked if she knows why the mayor would prefer someone else for the role, she said: “I’m going to leave that alone. They didn’t want Adrienne Adams to be speaker and she is speaker — a good speaker.”

The speaker’s office did not respond to a request for comment Wednesday.

‘The Most Feared’
The investigative unit was reconstituted by former Council Speaker Corey Johnson in 2018 after years of dormancy in part to assert the Council’s independence from the mayor’s office.

Torres said that while he faced some political constraints, he was proud of the committee’s work in revealing the true extent of heat and hot water outages in public housing and of exposing the shaky math behind the mayor’s plan to create 100,000 “good-paying jobs.”

The committee also uncovered a memo, via the threat of subpoena, that predicted the eventual collapse of the city’s yellow taxi medallion market, according to Torres.

“Conducting investigations and holding hearings are far more powerful catalysts for change than passing a reporting bill that agencies will stop implementing over time,” said Torres.

“Oversight and investigations is what you make of it. An effective chair can make it the most feared committee in the City Council.”

Speaker’s Race
As a mayoral candidate, Eric Adams promised not to directly meddle in the race for Council speaker.

But in early December, his surrogates began a push to get Moya the 26-vote majority needed to helm the 51-seat City Council.

Within a week, four contenders for speaker dropped their bids and put their muscle behind Adrienne Adams — a move that ultimately helped her win the race.

Since Adrienne Adams was formally elected by her colleagues to lead the City Council last week — becoming the first Black speaker — two of the four former candidates have been rewarded with plum positions.

Councilmember Justin Brannan (D-Brooklyn) is believed to be in line for chair of the powerful finance committee, multiple sources told THE CITY.

The fourth candidate who dropped their bid for speaker is Brewer.

The former Manhattan borough president’s backing of Adrienne Adams helped her cement a victory as speaker, while Menin had supported Moya, according to multiple sources.

Menin, who previously served as commissioner of the Department of Consumer Affairs and as director of the city’s 2020 census program, also told members in early November that she was running for speaker, only to abandon the bid within days — which sources said rankled some members.