Report: Pathway to Citizenship for 10 Million Would Boost GDP by $1.7 Trillion 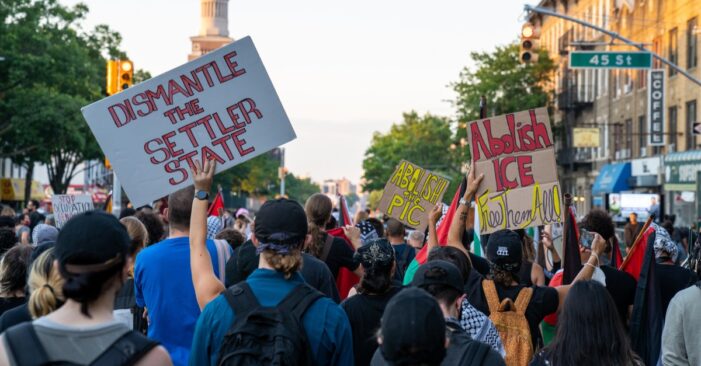 “Free them all” – A call to action to denounce mass deportations, family separation and child incarceration along with Palestinians. – Brooklyn, NY USA July 4th, 2021 (Shutterstock)

By Rafael Bernal, The Hill

Granting a pathway to citizenship to all undocumented immigrants in the U.S. would boost the nation’s economy by $1.7 trillion over the next decade while creating 438,800 new jobs, according to a new report by the Center for American Progress (CAP) and the University of California, Davis.

The report published by CAP, a progressive think tank, modeled different economic outcomes based on scenarios where different groups of undocumented immigrants were granted a pathway to citizenship.

According to the report, the 10.2 million undocumented immigrants who currently live in the United States have lived in the country for an average of 16 years.

Granting a pathway to citizenship for all the 10.2 million would boost the gross domestic product (GDP) by $1.7 trillion, according to the report, and raise the average wage of those immigrants by $4,300 over five years and $11,800 over 10 years.

While President Biden’s original immigration plan, the U.S. Citizenship Act introduced in the House by Rep. Linda Sánchez (D-Calif.) and in the Senate by Sen Bob Menéndez (D-N.J.), would grant a pathway to citizenship for all undocumented immigrants, that bill is not expected to get standalone consideration as-is, although the idea of a blanket pathway to citizenship has gained some steam, particularly among progressive and libertarian circles.

Immigration advocates are increasingly bullish about the prospects of including a pathway to citizenship for specific groups of undocumented immigrants in a Senate reconciliation package, which would avoid the need for Republican support but would require unanimous Democratic approval.

The House has already passed a set of bills, with modest bipartisan support, that would grant legalization with a pathway to citizenship for Dreamers — undocumented immigrants brought to the country as minors — beneficiaries of the Temporary Protected Status (TPS) program and, separately, immigrant farmworkers.

Another bill to grant a pathway to citizenship for undocumented workers deemed essential during the pandemic has broad support among Democrats.

Passage of the American Dream and Promise Act would boost the national GDP by $799 billion and create 285,400 new jobs over the next decade. The average salary of covered Dreamers and TPS holders would rise by $16,800 over that time span, while nationwide average salaries would be pushed up by $400.

Legalization targeting essential workers would boost the economy by $989 billion, creating 203,200 new jobs, raising beneficiaries’ wages by $11,800 and average national wages by $300 over the next decade.

According to the report, 5 million undocumented immigrants are considered essential workers, based on Census Bureau data and a Department of Homeland Security definition of “essential workers.”

A combination of the American Dream and Promise Act plus pathway to citizenship for essential workers would boost GDP by $1.5 trillion, create 400,800 new jobs raise the immigrants’ wages by $13,500 and nationwide average wages by $600.

“As the findings above show, creating a pathway to citizenship for undocumented immigrants not only is the right thing to do but also would be a substantial stimulus to the U.S. economy,” reads the report.

The report comes as immigrant advocates push for inclusion in what is likely to be a last reconciliation bill allowed by Senate rules in fiscal 2021, potentially including immigration proposals in an infrastructure package.

Democratic Senate leaders were hoping to get up to three reconciliation bills approved by the Senate parliamentarian, but were dealt a blow earlier this month when Parliamentarian Elizabeth MacDonough issued a ruling allowing only one more such attempt this year.

While some immigration proposals, including the American Dream and Promise Act and the farmworker bill, have some bipartisan backing, it’s unlikely they’ll find the support of 10 Republican senators needed to overcome a filibuster.

Still, Democratic leadership and the White House are eager to deliver some form of immigration relief, particularly to energize mixed-status constituencies in Texas and Florida ahead of the 2022 midterm elections.

Report: Pathway to Citizenship for 10 Million Would Boost GDP by $1.7 Trillion added by admin on July 5, 2021
View all posts by admin →