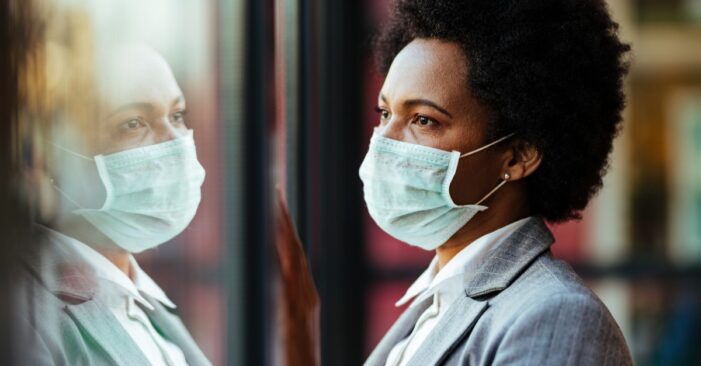 All private sector workers in the city must be vaccinated against COVID-19 under a first-in-the-nation mandate rolled out by Mayor de Blasio on Monday — but the sweeping new rule drew swift pushback from business leaders and could pose a logistical headache for incoming Mayor Eric Adams.

The mandate — which won’t take effect until Dec. 27, five days before de Blasio leaves office — applies to employees at roughly 184,000 businesses in the five boroughs, according to City Hall. It comes as New York is bracing for a surge in coronavirus infections this winter, potentially fueled by the troubling new omicron variant.

“We know what happens when we get a new variant, particularly one that’s highly transmissible. It’s not something we can’t handle. We have the tools, but we have to use those tools aggressively, and we have to move quickly,” de Blasio said in a briefing. “That’s why I describe the actions we’re taking today as a preemptive strike — get ahead of this problem before it deepens and use the thing that works: Vaccination.”

The mandate will only apply to “in person” employment at companies with at least two workers, de Blasio said, opening up the door to exemptions for those who work from home.

The city will also set up a system for employees to submit requests for reasonable accommodations from the mandate for medical and religious reasons, similar to the exemptions granted under the municipal workforce mandate, de Blasio said.

It was not immediately clear how the mandate will be enforced or whether companies and employees will be slapped with monetary fines or other reprimands for non-compliance. De Blasio vowed to release more details on Dec. 15.

De Blasio’s latest push for vaccinations could run into roadblocks.

Adams, who will be sworn in as the next mayor on Jan. 1, declined to off the bat commit to keeping the private sector mandate, raising the possibility that he could alter or scrap it days after it’s implemented.

“The mayor-elect will evaluate this mandate and other COVID strategies when he is in office and make determinations based on science, efficacy and the advice of health professionals,” said Evan Thies, a spokesman for Adams.

Despite Adams’ lukewarm response, de Blasio said he discussed the policy at length with the soon-to-be mayor last week.

“And he understands that my job is to keep New Yorkers safe until Dec. 31 and then hand the baton to him,” de Blasio said. “So I feel very, very good about the conversations we’ve had and the close coordination that he and I are constantly involved in.”

“It sets up problematic confrontations between employers and staff, which could result in layoffs around the holidays that would be incredibly unfortunate,” said Randy Peers, president and CEO of the Brooklyn Chamber of Commerce, which advocates for businesses in the borough. “With surrounding counties and states unlikely to follow, people will choose to shop and work outside the city, imposing horrific financial consequences on our tax base and our businesses.”

In addition to the wide-ranging private sector order, de Blasio announced he’s expanding the city’s indoor mandate for dining, entertainment and fitness to also cover kids ages 5-11, with the youngsters being required to show proof of at least one dose of coronavirus vaccine starting Dec. 14.

In yet another expansion, de Blasio said he’s also requiring those older than 12 to show proof of two doses of coronavirus vaccine to participate in indoor activities starting Dec. 27, unless they received the one-shot Johnson & Johnson jab.

Health Commissioner Dave Chokshi, whose authority is being tapped to implement the latest mandates, said de Blasio’s actions are necessary at a time when the city’s COVID-19 curve is trending in the wrong direction as the omicron variant sweeps in.

“It’s an all hands on deck moment for New York City. We’re seeing enough about omicron that is concerning that warrants the bold steps that the mayor announced today,” Chokshi said, noting that the city’s seven-day average for COVID-19 hospitalizations reached its highest point in months over the weekend.

Though he also voiced concern over omicron, NYC Hospitality Alliance executive director Andrew Rigie said de Blasio’s expansion of the indoor vaccine mandate could not have come at a worse time.

“U.S. families visiting New York City for scheduled holiday vacations may not be able to meet the vaccination requirements for children or themselves in time, and children aged 5-11 across the globe aren’t universally authorized to get vaccinated,” said Rigie, whose group represents hundreds of restaurants and bars in the city. “Given the rapidly approaching holidays and considerable impact of the Dec. 14 deadline, the proposal should be delayed until next year.”

In another potential wrinkle for de Blasio, his private sector mandate will “no doubt” draw lawsuits, said Steve Bell, a labor attorney at the Dorsey & Whitney law firm who has been advising companies on vaccine mandates during the pandemic. Any such legal challenges would in turn end up on the Adams administration’s plate.

De Blasio’s previous vaccine mandates — including his requirement for all city workers to get shots — have withstood court challenges.

In a potential warning sign, however, President Biden’s administration was recently blocked by a court from enforcing a similar mandate on a federal level for private companies with more than 100 employees.

Georgia Pestana, the de Blasio administration’s corporation counsel, countered that the city mandate stands a better chance at weathering court challenges because it’s being applied “across the board.”

“It’s not picking one industry over another and treating them differently,” Pestana said. “So we’re confident that this will survive any challenges.”

Several cases of omicron have already been identified in the city, and though it remains unclear just how dangerous the new variant is, public health experts are warning that its complex mutation makeup could make it extremely contagious.

Amid the omicron uncertainty, de Blasio framed his private sector mandate as a precaution that could coax more people into getting vaccinated.

“What’s going to keep New Yorkers safe as we now face a new threat? This will do that. This mandate will make a huge difference,” he said. “It’ll be in effect quickly, and it’s going to help protect people then for months and months to come.”