Mr. Banks, who founded the Eagle Academy, a network of public schools for boys, is the first commissioner named to Mayor-elect Eric Adams’s administration. 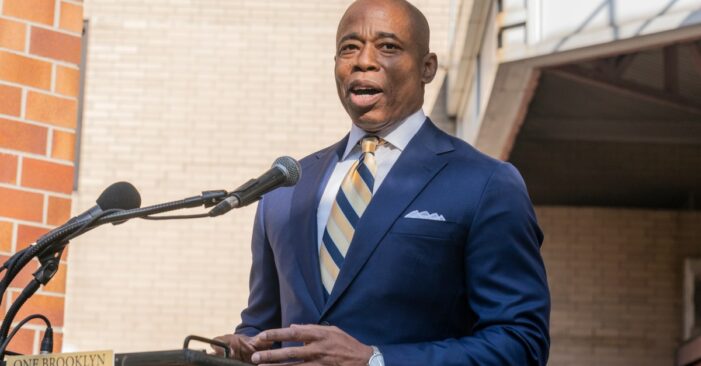 David C. Banks, a longtime New York City educator who rose to prominence after creating a network of public all-boys schools, has been chosen by Mayor-elect Eric Adams to be the next chancellor of New York City’s public school system, the nation’s largest.

Mr. Banks, the founder of the Eagle Academy for Young Men and a close friend and key adviser to Mr. Adams, will take over the system as it struggles to emerge from the educational wreckage of the pandemic, which disrupted learning for more than 18 months and strained the mental health of many of its roughly one million students.

Mr. Adams announced his selection of Mr. Banks at a Thursday morning appearance at Public School 161, the elementary school in the Crown Heights neighborhood of Brooklyn that Mr. Banks attended as a child.

“I want to help transform the lives of so many of our children, but particularly Black and brown children who have struggled the most in this system,” Mr. Banks said in an interview. “They need people to be bold on their behalf.”

Without sweeping changes, Mr. Banks said, “you’re just going to play around in the margins.”

The chancellorship, which Mr. Banks has eyed for years and comes with oversight of a roughly $38 billion annual operating budget, is arguably the second-most influential education job in America, after the federal education secretary.

Mr. Banks, 59, comes to the role with crucial advantages, some of which his recent predecessors have lacked and which could help him become the most powerful city schools chancellor in more than a decade, since Joel I. Klein brought major, often disruptive, change to a system that had seen little of it for years.

A native New Yorker who has taught in and led several schools in the city, Mr. Banks now runs the foundation that provides support for the Eagle schools, and has the sort of deep knowledge of the city’s byzantine educational bureaucracy that can take years for an outsider to master.

He created the Eagle Academy schools to address an urgent problem he saw as an educator: boys of color struggled academically and often faced harsh discipline that left them feeling isolated from school and sometimes drawn to gangs. Teachers — many of them white women — often didn’t know how to help. The city had tried and largely failed for years to find solutions.

The Eagle schools, which are unionized district schools that serve low-income Black and Latino boys in grades six through twelve, boast higher graduation rates than many of their neighboring schools and are known for their strong focus on structure and community.

While some of the schools have low standardized test scores, they are broadly viewed by many educators, as well as senior members of both the Bloomberg and de Blasio administrations, as a bright spot in the city’s halting efforts to improve schools for its most vulnerable students.

The news conference had the celebratory atmosphere of a long-awaited reunion among friends. Most of Mr. Banks’s family, except for his brother Philip, attended, and he held up a photo of himself as a fourth grader to laughter and applause.

Mr. Banks and Mr. Adams also issued a stark warning to the city’s educational bureaucracy, saying they would re-evaluate administrative jobs that they do not believe are serving children.

Mr. Adams called Mr. Banks his friend and brother. “We not only respect each other, we love each other,” the mayor-elect said.

As a charismatic evangelist for his schools, Mr. Banks has become one of the most politically connected educators in the city. He has close ties not only to elected officials, but to the leaders of the city’s business and philanthropic power centers, some of whom he has recruited to mentor Eagle students on Saturdays.

Mr. Banks will also have the benefit of a larger operating budget than his recent predecessors, because of significant funding increases from the federal government aimed at pandemic recovery and a recent settlement agreement after New York was found to be underfunding its neediest schools.

While Mayor Bill de Blasio was known to micromanage his commissioners, Mr. Adams has signaled that he will give his more leeway. That may be particularly true for Mr. Banks, a friend of three decades who enjoys a position at the center of the mayor-elect’s inner circle.

Indeed, his selection as chancellor had seemed highly likely since June, when it became clear that Mr. Adams was likely to win the Democratic nomination. As Mr. Adams delivered a triumphant speech on primary night, Mr. Banks stood beaming by his side.

Despite all of those advantages, it’s not yet clear how Mr. Banks’s success building the Eagle network will translate to the extraordinarily difficult task of running a vast system of 1,600 schools, many of which lack the strong leadership, fund-raising prowess and political support that Eagle enjoys.

While it is extremely difficult to create new schools, it can be even harder to improve schools that educate the most vulnerable children in the system and have been struggling for decades.

Mr. Adams has said he plans to focus on shoring up services for children with disabilities and offering more opportunities for early childhood education, but he has not yet provided a detailed plan for how to improve the system, putting more pressure on Mr. Banks to lay out his vision early.

The school system is grappling with profound challenges.

Enrollment has dropped by over 50,000 children since fall 2019. Roughly 100,000 public school students are homeless, and New York has struggled for years to meet their needs. The city’s school system is among the most racially segregated in the country. Many dozens of schools are still extremely low-performing, and some of the city’s 200,000 students with disabilities are not receiving all of their support services, a longstanding issue exacerbated by the pandemic.

Mr. Banks and Mr. Adams will face urgent decisions as soon as they take over, including how and whether to admit students into gifted and talented classes, after Mr. de Blasio announced this fall that he intended to end the programs entirely, and whether to implement a vaccine mandate for students.

Mr. Banks has already begun to build out his cabinet. Daniel Weisberg, who served as the lead labor strategist for schools under former Mayor Michael R. Bloomberg and now runs an organization focused on teacher training and quality, will serve as Mr. Banks’s first deputy. And Mr. Banks has recruited Kenita Lloyd, the chief operating officer of the Eagle Academy Foundation, to be deputy chancellor for family engagement.

The Eagle schools embody elements of both traditional and progressive education models that Mr. Banks has sought to prove should not be contradictory. They employ many male teachers of color — a rarity in many city schools — and encourage students to have frequent discussions about racial identity and cultural pride.

Boys are required to wear jackets and ties, follow a strict discipline code and attend a longer school day than many other public school students, which has left some with the mistaken impression that the schools are charters.

Despite the schools’ positive qualities, some have struggled with performance, particularly in the middle school years when students are new to Eagle. Three of the five Eagle schools in New York have posted middle school test scores that have led to them being ranked some of the lowest-performing schools in the state, which has raised questions about what other support the schools’ at-risk students might need.

The first Eagle school was created in 2004 in the Bronx, the first public single-sex boys’ school to open in New York City in roughly 30 years, under Mr. Bloomberg’s initiative to replace some of the city’s long-troubled high schools with smaller schools. There is now a school in each borough and one in Newark, N.J.

Before founding the Eagle Academy, Mr. Banks helped create the Bronx School for Law, Government and Justice, a prototype for the small schools initiative.

Allies said they believed Mr. Banks could revive that initiative and some others that Mr. Bloomberg created, which were considered largely successful and which Mr. de Blasio paused or ignored, including one to create partnerships with the private sector, without alienating Black and Latino parents as the billionaire Mr. Bloomberg did.

The next chancellor grew up mainly in Southeast Queens, the son of a police officer and a secretary who demanded good grades from their three sons. Mr. Banks earned his law degree from St. John’s in Queens and worked for the city’s law department and the state attorney general before becoming a public school teacher in Crown Heights.

Mr. Banks, a gregarious person who broadcasts his enthusiasm by speaking at a near-shouting pitch, spoke excitedly in the interview about the public school teachers who inspired him as a child. But he promised to take bolder action than some of his predecessors to shepherd weak teachers out of the system.

That pledge is unlikely to boost his popularity with the United Federation of Teachers, which endorsed one of Mr. Adams’s rivals during the primary.

Mr. Banks, like the incoming mayor, is supportive of charters.

“These are the communities that I’ve worked in, and these families are desperate for quality seats, quality schools,” he said. “And if the traditional public schools were offering that, you wouldn’t see such a mass rush to the charter schools.”

But, he added, “I’m being asked to be the chancellor for the traditional public school system, and I’ve got to create that as a place where people really want to be.”

That same logic drives his stance on integration. Mr. Banks said he supported integration efforts generally, but that his experience at Eagle showed that many families of color were not necessarily clamoring for integrated schools, just good ones.

Mr. Banks’s views defy neat ideological definition. He has been a consistent critic of what he considers the overreliance on suspensions in schools and is skeptical of using standardized test scores to judge individual students and schools.

Mr. Banks was an early adopter of a culturally responsive curriculum that has only recently become a national lightning rod. Mr. Banks helped Scholastic curate a collection of books focused on Black and Latino boys. As chancellor, he said, “I would make sure all kids get that kind of exposure.”

The Eagle schools have risen to prominence with the help of Mr. Adams, who also relies on the counsel of Mr. Banks’s family. Sheena Wright, Mr. Banks’s partner, who runs the nonprofit United Way of New York City, is leading Mr. Adams’s transition team.

And Mr. Banks’s brother, Philip, a former N.Y.P.D. chief of department who resigned from his post in 2014 amid a corruption scandal early in Mr. de Blasio’s tenure, is being considered for a senior role in the Adams administration. Philip Banks was never charged with a crime.

Mr. Banks’s other political allies include Hillary Clinton, a crucial supporter of the Eagle Academy from her time as New York’s junior senator. A group of Eagle students recited “Invictus,” a poem by William Ernest Henley, at the 2016 Democratic National Convention in Philadelphia where Mrs. Clinton won the party’s nomination for president.

It’s the same poem that Eagle students recite each morning, often raising their voices to shout the final line: “I am the master of my fate, I am the captain of my soul.”