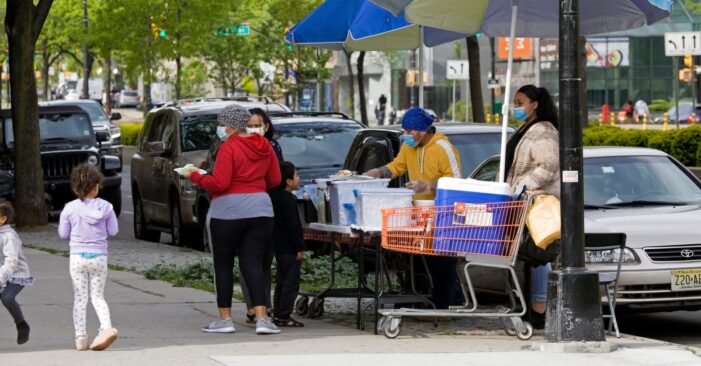 BRONX, New York (WABC) — There is outrage and disbelief in the Bronx after video showed sanitation workers throwing carton after carton of fresh produce from a local vendor into garbage trucks.

The video shows sanitation crews throwing box after box of fresh fruit and vegetables into a garbage truck from a stand on Pelham Parkway, with an angry crowd protesting the move.

Diana Hernandez Cruz, an immigrant and a new mother, has worked at the stand for five years.

On Saturday, she was back at the corner with the food telling Eyewitness News what happened here on Thursday, when two police officers called the sanitation department to remove the items after she couldn’t provide a permit.

“When I saw the sanitation department … all the food. It made me so angry,” she said.

The New York City Department of Sanitation responded, saying they were called because the food items were abandoned, and their crews had to throw them out because by law, a department of health representative has to be on hand to certify the food is safe.

Meanwhile, the Department of Consumer and Worker Protection released a statement, saying “the results of this multi-agency vending enforcement are not in line with the City’s policies. DCWP and its sister agencies who assist with confiscations when necessary will work together to ensure this type of wastefulness does not happen again.”

Local food vendor activists say the issue really is that these hardworking vendors are not getting the permits they deserve.

“Instead of giving her the opportunity to formalize her business, get a permit, she is being criminalized,” said Carina Kaufman-Gutierrez of the Street Vendor Project.

Hernandez Cruz says she plans to continue to work at the food stand and continue to pursue a city permit.