Why the U.S. Nursing Crisis is Getting Worse

Burnout, vaccine hesitancy, and plum traveling gigs are making it harder for hospitals to hire the nurses they need. 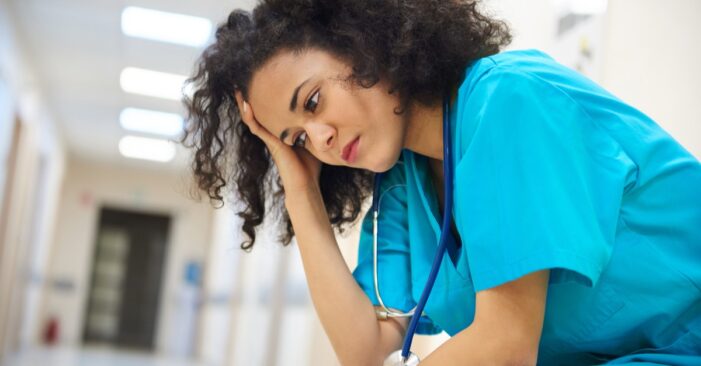 Covid-19 may no longer be surging widely across the United States, but America’s hospitals are still experiencing a staffing crisis that is putting critical care for patients in jeopardy.

Hospitals all over the country are struggling, especially those in lower-population areas. A new survey of rural hospitals from the Chartis Group, provided to Vox in advance of publication, reveals how deep the problem runs. Nearly 99 percent of rural hospitals surveyed said they were experiencing a staffing shortage; 96 percent of them said they were having the most difficulty finding nurses.

Almost half of the hospitals in the survey said staffing problems had prevented them from accepting new patients in the past 60 days. One in four hospitals said that a lack of nurses had forced them to suspend certain services, including, according to Michael Topchik, national leader of the Chartis Center for Rural Health: newborn delivery, chemotherapy, and colonoscopies. Another one in five said they were considering it.

“The pandemic has maxed out these hospitals,” Topchik told me, “which means they are unable to provide services vital to the community.”

Hospitals have gotten a lot better at handling Covid-19 surges. They have more weapons at their disposal — antiviral drugs and monoclonal antibodies — and better understand which techniques are effective at preventing the disease from getting worse. Roberta Schwartz, chief innovation officer at Houston Methodist Hospital, told me while her hospital started shutting down services immediately during the first pandemic wave, they were able to absorb more than 700 Covid-19 patients during the most recent summer wave without compromising their other operations.

But as flu season looms and cold weather threatens another Covid-19 surge, two trends that would fill up hospital beds again, the staffing crisis isn’t easing.

According to a September study commissioned by the American Hospital Association, the average cost of labor expenses for each discharged patient has grown by 14 percent in 2021 — even as the number of full-time employees has dropped by 4 percent.

Hospitals, both rural and urban, are feeling the squeeze. Their workforces are burned out. Some staff members are still reluctant to take the Covid-19 vaccine, even as some facilities start to impose mandates. And they are facing competition from traveling nursing companies that are offering better and better benefits to lure nurses away from permanent full-time jobs.

With some services being shut down, patients in underserved areas may have to travel hours to larger facilities — hospitals that are experiencing their own staffing challenges and often run at near 100 percent capacity already.

“There are nursing shortages nationwide, which means many hospitals can’t staff all their beds,” Karen Joynt Maddox, assistant professor of medicine at Washington University in St. Louis, told me. “The big referral centers … chronically operate at or above capacity, so any bumps in volume put additional strain on the system.”

Why many American hospitals have a staffing crisis
Burnout among the health care workforce remains acute 20 months into the pandemic. About half of medical workers reported feeling burnout during 2020, according to a study from the American Medical Association. Almost half of ICU nurses said in another survey earlier this year that they were considering leaving the profession.

Nine in 10 rural hospital leaders said their concerns about staff burnout had increased over the course of 2021. In other words, the staffing crisis is getting worse, not better.

“The workforce is burnt out. The workforce is leaving,” said Beth Feldpush, senior vice president at America’s Essential Hospitals. “The human capacity is more of an issue than physical capacity.”

The average age of a nurse in the United States is 50; some of those workers decided to retire early rather than push on through the most difficult working conditions of their career.

”This is mental anguish,” Schwartz said. “We have an aging workforce. Some of them might have worked another year or two, but with a pandemic, nope.”

Vaccine hesitancy could end up making this difficult situation worse. Only about 25 percent of the rural hospitals surveyed by Chartis are instituting a vaccine mandate (some of which have not yet taken effect), but, among those, about one in four expect a significant percentage of their staff — 5 percent or more — not to comply with the mandate.

For some of them, that would mean an automatic termination and another job opening that the hospital needs to fill.

But that’s when the third problem squeezing hospitals complicates things: It’s getting harder to hire and retain nurses because many of them can earn a higher salary working as a traveling nurse, hired for a temporary period by a hospital facing a staffing crunch — and willing to pay the rising prices commanded by those workers.

As NBC News reported last month, permanent nurses at rural hospitals make on average about $1,200 per week. These days, some travel nursing firms are offering their workers more than $5,000 per week.

“This has been a huge shift for many folks,” Mary Beth Kingston, chief nursing officer at a health system serving Illinois and Wisconsin, said in a panel discussion on the staffing crisis hosted by the AHA. “People are leaving their place of employment because this is a chance to increase their salary in a major way.”

Traveling nurses have played an important role in the pandemic. Hospital leaders say that, in essence, they needed to increase their workforce by 20 percent to handle Covid-19 surges, and the travel firms helped to supply that excess staffing. In the Chartis survey, more than half of the hospitals said their use of travel nurses had increased “significantly” during the pandemic, even though most of them used those workers only “rarely” prior to the current crisis.

But that increase in demand has allowed travel nursing firms to offer those higher salaries and more generous benefits, which can lure nurses away from permanent employment. Hospital leaders describe a situation in which full-time nurses and traveling nurses are sitting side by side at a nursing station, with the latter telling the former how much money they are making in this new role.

In the Chartis survey of rural health systems, hospital leaders named “more financially lucrative opportunities” as the No. 1 reason for their nurses leaving, followed by pandemic burnout and retirement.

There isn’t an easy solution to the nursing crisis. The worrisome trends actually predate the pandemic; in 2018, a study in the American Journal of Medical Quality projected more nursing shortages to appear from 2016 to 2030, concentrated particularly in the South and the West.

The aging workforce is part of the problem, and not enough students are enrolling in nursing school to offset those losses, according to the American Association of Colleges of Nursing.

There are some provisions in Democrats’ pending Build Back Better legislation to support the health care workforce by forgiving loans for medical education, incentivizing more doctors and nurses to practice in underserved areas, and providing more funding to hospitals that run graduate education programs.

But hospitals don’t believe it will be enough. They are preparing for a world in which Covid-19 is endemic, a regular part of the medical calendar — and their staffs are still overstretched.

“They are concerned with the overlap of a winter surge and more flu circulating,” Feldpush said. “They do not expect to see any alleviation in staffing shortages or costs.”