What is President Biden’s Plan for Ending Title 42? 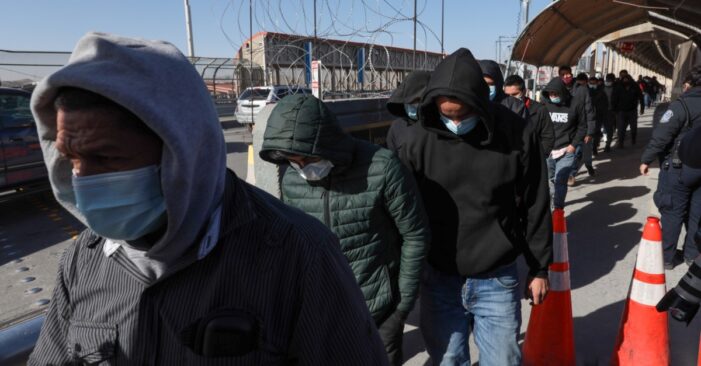 Juárez, Chihuahua, Mexico, 12-06-2021 100 migrants were returned to Mexico under title 42 health measure due to the pandemic that is currently being experienced in the world. (Shutterstock)

The Centers for Disease Control and Prevention (CDC) announced in early April that it would end Title 42, the pandemic border policy that allowed immigration officials to rapidly “expel” migrants over 1.7 million times. However, the CDC delayed the termination until May 23 to give the U.S. Department of Homeland Security time to prepare for an expected increase in people seeking asylum after Title 42 ends. Now, a new plan put out by the Biden administration shows how DHS is preparing to respond.

DHS’ new “Southwest Border Strategic Concept of Operations” is an ambitious plan for a short-term response to the current situation at the border. It focuses primarily on “decompression;” ensuring that the federal government has enough resources in place to process migrants without leading to massively overcrowded detention centers at the border.

Under this plan, the Biden administration intends to surge resources to the Border Patrol, including detailing additional law enforcement officers and building new “soft-sided” holding facilities. However, one major challenge will be staffing. If migration hits new records in the upcoming months, the agency says it will need an additional 1,500-2,500 law enforcement officers and 2,500 support personnel to respond properly. It’s unclear where it would be able to get those personnel, especially on short notice.

The administration also intends to engage in a collective effort to work with NGOs along the border to coordinate releases, where necessary. And after Title 42 is ended, the Biden administration says that one goal of adding more resources at the border is to transfer people to ICE for “expedited removal, regular detention, and in certain situations parole coupled with alternatives to detention.” These options were in use at the border before Title 42 began in 2020 and will be used more often once it’s ended.

One downside of the plan is that it focuses almost entirely on resources for people crossing between ports of entry. It doesn’t call for a similar surge in resources to the ports of entry themselves, by increasing staffing and expediting processing procedures at U.S. Customs and Border Protections’ Office of Field Operations. The ports of entry have been almost completely closed to asylum seekers for two years, leading to tens of thousands of migrants waiting in Mexico.

Without a concrete plan for the ports of entry, frustrated migrants waiting to cross may be incentivized to cross between ports of entry instead, exacerbating the pressure on the Border Patrol.

The recent processing of 10,000 Ukrainians, almost entirely at a single port of entry, shows that CBP can process people in high numbers if it chooses. Some critics of the Biden administration have said that DHS is unprepared and Title 42 should stay in place until DHS has a plan. As the “Concept of Operations” shows, Biden does have a plan.

However, it’s not a plan to block migrants from coming in the first place, which many people want him to do. By contrast, the Biden administration’s plan is premised on the fact that in the short-term, migrants are coming to the border, and so our primary goal should be to ensure they are processed in an orderly fashion and not subject to inhumane conditions.

As DHS’ plan itself acknowledges, there are long-term strategies that will “prevent and limit the impacts” of future mass-migration events. But implicit in the Biden administration’s plan is the acknowledgement of reality; you cannot turn off migration with the push of a button, and migrants have a right to seek asylum in the United States

Until we find some way to rebuild our humanitarian protection system and address the underlying root causes of migration, our goal should be to ensure we can respond efficiently and humanely—and not to find increasingly draconian ways to turn people away.

Over the last 30 years, we’ve seen that increasingly harsh deterrence-based policies haven’t worked to stop migrants from coming. By putting forward a plan that focuses primarily on ensuring that process is done orderly and humanely—not on deterrence—the Biden administration is finally responding to migrants in a different way than its predecessors. Whether the plan will work remains to be seen. But it’s notable that Biden is not calling for a massive increase in harsh tactics.