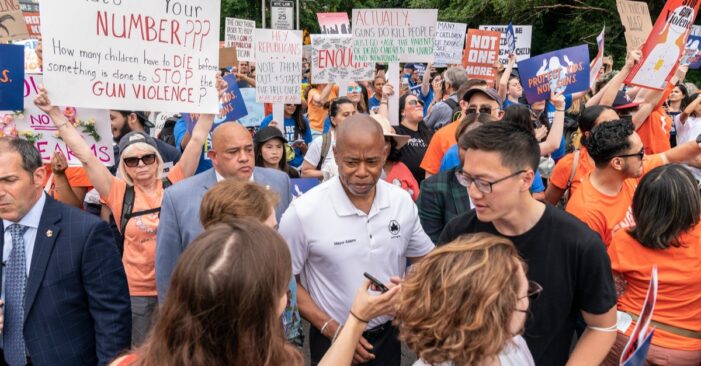 Mayor Eric Adams is putting his political muscle behind veteran state Assembly incumbents being challenged by socialist insurgents egged on by Rep. Alexandria Ocasio-Cortez in the upcoming June 28 Democratic primary.

Adams on Tuesday endorsed the re-election of Harlem Assemblywoman Inez Dickens, one of the first black lawmakers to call for changes to the bail law sought by the mayor in Albany.

AOC is backing her former staffer, Jonathan Soto, in the 82nd Assembly District in the northeast Bronx that overlaps with her congressional district.

Political sources said Adams and AOC are engaged in a proxy war over who controls the state Legislature and New York City government — mainstream Democrats or socialists.

“Mayor Adams is laser-focused on public safety and he’s supporting like-minded mainstream Democrats who support his agenda. He’s making it clear where he stands,” said consultant Jonathan Reinish, a former staffer to US Sen. Kirsten Gillibrand.

Adams showed up Tuesday morning at Dickens’ Harlem campaign headquarters, where she also received the blessing of a cadre of Baptist ministers.

“I am proud to endorse my friend, Inez Dickens for re-election. I have a great deal of respect for Inez,” Adams said in a release put out by the Dickens campaign.

“Her consistency over the years is unwavering in her representation of Harlem and the people of our entire state. To do all that is needed for our city right now will take a seasoned leader in Albany, and that is Inez Dickens.”

Dickens said, “I am so blessed to have my ministers and the great mayor, Eric Adams, support my run for re-election. We must work together, united in our convictions to get the resources our community needs and deserves. I am committed to delivering on my promises to create a stronger and more unified Harlem.”

The assemblywoman later told The Post that the upcoming primaries are indeed a political war pitting Adams and Democrats against AOC and the socialists.

“Mayor Adams said from the very beginning that he’s not a socialist. He’s a Democrat,” Dickens said.

“We are Democrats! We are not socialists!,” Dickens said emphatically. “AOC and the socialists are trying to take over New York.”

The AOC-backed challenge to Dickens, 72, is not an idle threat. Democratic socialist Kristin Richardson last year was elected to the City Council representing Harlem.

Benedetto said he was thrilled that Adams was joining him at the Juneteenth event in his district celebrating the emancipation of slaves. It is being held in the auditorium of Co-Op City, the complex of 35 high-rise apartments largely populated by working-class and middle-income black tenants, a key constituency in the upcoming primary.

“AOC is with my opponent. They support the same things like defunding the police,” Benedetto said.

“Mayor Adams is making a statement that he wants level-headed Democrats to move New York City ahead. I share the same values as Mayor Adams. We want good education and safe streets,” added Benedetto.

Benedetto, a retired teacher who chairs the Assembly Education Committee, worked closely with Adams to renew a state law for two years that gives the mayor the authority to oversee the city’s public school system.

Adams has made his distaste for the socialist left well known.

During a campaign fundraiser last summer, Adams told supporters he was in a fight against the Democratic Socialists of America. Ocasio-Cortez is considered the young superstar leader of the DSA.

“They realize that if I’m successful, we’re going to start the process of regaining control of our cities.”

“Our campaign is focused on the policies rather than the personalities of this race. I’d like to see Mr. Benedetto explain to voters why he is supporting the Mayor’s vision to defund our public schools by $250 million dollars,” Soto said.

“I’m proud to be endorsed by both Congresswoman Alexandria Ocasio-Cortez and Public Advocate Jumaane Williams, two leaders who will fight for our children’s future and against defunding our public schools.”