A Brooklyn LLC that boasts of its “non-union” labor is the subject of numerous wage theft complaints by immigrant workers. 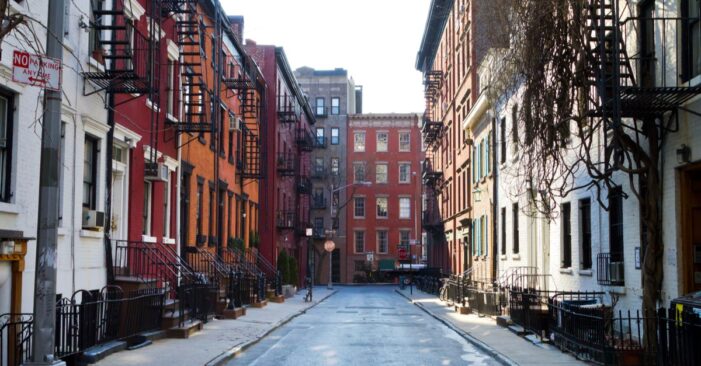 When JLM Decorating hired Miguel Tapia to paint apartments in Manhattan and Brooklyn, they told him he would receive $800 in cash per week for his work. Instead, Tapia, who was born in the Dominican Republic, was paid about half that amount. He complained to his supervisor, Josafath Arias, who said the company will pay him later. Wage theft happened “to everyone that worked there — easily some 100 workers,” Tapia told Documented.

Tapia decided to show up at the company’s principal address, 199 Lee Avenue in Williamsburg, with 15 of his co-workers, who also said they were owed wages. They did not find an office, but rather, a small storefront shipping business at the foot of a three-story brick building. “We were not allowed to come in,” Tapia said.

Most of Tapia’s co-workers remained silent for fear of reprisals given their immigration status, he said. He ended up filing a wage theft claim that has been unresolved at the state Department of Labor since 2019. An agency spokesperson declined to comment on an open investigation.

What Tapia and his co-workers may not have known at the time was that over 2,000 companies are also registered to 199 Lee Ave. The address is notorious among Brooklyn housing and labor advocates as a nexus of wage theft and neglectful landlords.

“The moment I see that address in Brooklyn, I see what’s going on,” said Alex Garcia, a former Worker Rights Manager at New Immigrant Community Empowerment (NICE). “You’re not going to get paid. This is wage theft.”

Many of the companies at the address are LLCs, limited liability corporations that were created so landlords could own apartment buildings and shield themselves from lawsuits. To sue a company in New York, it’s necessary to serve a legal notice directly to an individual at an address or post it on the business’ door, which is impossible in the case of 199 Lee Ave companies. Suite 215 alone hosts more than a hundred LLCs.

“I have to assume that 199 Lee Ave is a front for wage theft, but I can also imagine that there are other violations that they seek to evade liability for,” said Alice Davis, attorney of Catholic Migration Services (CMS), which provides attorneys to immigrants regardless of immigration status. CMS has dealt with five different cases of wage theft registered to 199 Lee Ave companies.

Most of the companies registered to the address are either real estate owners or construction contractors, industries where wage theft is rampant and endemic, according to immigrant rights advocates. Very few of them pay legal consequences.

“This is a front to protect LLCs from attorneys and other individuals who are trying to enforce the law,” Davis said.

At least 15 wage theft cases involving several workers had been associated with 199 Lee Ave, according to three different nonprofit organizations — Catholic Migration Services, New Immigrant Community Empowerment (NICE) and Make the Road New York. That is just the tip of the iceberg.

JLM Decorating, for example, has been accused of wage theft in cases that potentially involve more than a hundred workers, according to court documents in the Southern District in New York, New York’s Department of Labor and nonprofits’ clients. None of these workers were unionized.

On its website, JLM boasts of its million dollar painting and coating contracts, “high-quality workmanship” and non-unionized workforce, which means lower prices for the real estate clients and more risks for workers.

Advocates for immigrant workers said JLM cuts corners by recruiting non unionized workers. It also has won contracts with some of the most luxurious real estate projects in New York City, including the Aman Hotel & Residences on Fifth Avenue and the Mandarin Oriental on Columbus Circle where a suite costs up to $36,000 per night.

The real estate press occasionally reports on Moshe Gold, a landlord and developer who is the Chief Executive Officer of JLM. He has signed substantial deals, like the $23 million sale of two buildings in East Harlem and the $19.7 million purchase of an office building in New Jersey.

There have been no mentions in the press, however, of the numerous wage theft accusations against JLM Decorating, Cosmopolitan Interior Corporation, City Views Blinds, and Abalene Decorating — some of the 16 LLCs registered under Gold’s name, New York’s Department of State records show. There also has been no scrutiny of the costs in lost wages and injuries that Gold’s low-wage workers, most of them day laborers recruited on the streets, according to a complaint filed in a federal court in New York, are forced to pay to complete its swanky projects.

At least eight of Gold’s companies are registered at another front for unresponsive landlords — 63 Flushing Avenue, a two-story warehouse near the Brooklyn Navy Yard. Companies registered to this address face at least five complaints of wage theft and construction workers’ injuries in federal and state courts.

Gold’s companies have systematically stolen workers’ wages at least since 2016, according to claims in the Southern District and the Labor Department, as well as testimonies from laborers, advocates and attorneys. All the publicly known cases refer to affected workers from Latin America and the Caribbean, most of them undocumented, say advocates. This is consistent with the City’s construction workforce makeup: 63 percent of these workers are immigrants, of which 41 percent are undocumented.

Perhaps the clearest indication that Gold ran a well-oiled scheme to steal workers of their wages through JLM was suggested by one of the company’s own executives in a lawsuit filed in the Southern District in January 2020. Angelo Lopes, JLM’s vice president from 2015 to 2019, claimed that the company’s top managers — Moshe Gold, Joel Gold and Maritza Rodríguez — were engaged “in a scheme to avoid paying employment taxes and to avoid compliance with the relevant wage and hour laws.”

Lopes alleged that the defendants hired day laborers and paid them “off the books” in cash without providing them with a wage statement with the hourly and overtime pay rate, as required by state law. He complained that the workers, who were routinely recruited “off the streets” by a foreman, “weren’t even making the minimum wage for the hours they were working.”

JLM has stolen at least $46,050 from nine workers in claims already settled, according to state records obtained by Documented. Workers said that this is only a fraction of the money JLM has stolen from them.

Santiago Garzón, born in Colombia, said the company relies on a seemingly unending pipeline of immigrant laborers who eventually quit after being short-changed. Garzón worked as a painter for JLM for only a few days in 2019 and said he was owed close to $500. He was able to recover a fraction of his money after advocates at NICE, the workers’ rights organization, pressured the company for months.

Without an advocate’s support, Garzón would not have been able to recover his wages, he said. Most of Garzón’s co-workers lost their money, fearful of getting in trouble and ending up detained and deported, despite the fact that all workers, regardless of their immigrations status, are entitled to be paid according to the law.

A trail of cases

In April 2018, Byron Rosero filed a class-action lawsuit in the Southern District of New York against JLM and Cosmopolitan Interior for failing to pay him overtime during his six years of employment. Rosero, hired to make deliveries, said he worked between 45 and 60 hours a week but was paid only for 40 hours weekly, court records show.

Gold and his companies “knowingly and willfully operated their business with a policy of not paying Plaintiff and other similarly situated employees” overtime, according to the lawsuit, which was settled in February 2019.

In April 2020, Israel Martínez filed a similar class-action lawsuit in the Southern District against JLM, with Gold and Arias as defendants. Martínez worked as a painter for “between fifty-two and seventy hours per week, and sometimes more,” for which he received overtime pay in “limited exceptions.”

The complaint was filed on behalf of at least forty workers in similar situations. The defendants sought to “maximize their profits while minimizing their labor costs and overhead,” the complaint stated.

JLM did not reply to multiple email requests for comment from Documented.

NICE’s advocates have helped laborers in six other wage-theft cases involving JLM and Cosmopolitan Interior, spanning from 2018 to 2020. “Very likely other workers were affected but just didn’t come to NICE,” said Sara Feldman, the nonprofit’s deputy chief of staff. In the 2018 cases, Gilbane Building was the general contractor — a company that NICE has confronted in other wage-theft cases, Feldman said.

Along with JLM, Gilbane Building worked on the exclusive Aman Hotel & Residences project, where a worker died due to a safety violation for which no contractor has paid any legal or financial consequence, as Documented previously reported. Another prominent client of JLM is Tishman, the contractor with the most worker injuries in New York in 2020, according to city records.

Advocates often claim that construction companies that steal wages likely violate safety measures, as they maximize profits by “cutting corners” across the board. “It is the business model of these companies and not just unique instances,” Feldman said. “It’s clear that this is a systemic problem.”

Gold’s companies have also been sued for failing to keep records of their workers’ payments. In March 2019, District Council 9 of the International Union of Painters and Allied Trades filed a lawsuit in the Southern District alleging that Cosmopolitan Interiors had failed to report the hours worked by its employees and to remit the union’s contributions. The union estimated the damages at almost $520,000.

A year later, Gold was sued for allegedly violating the contract with the New York City District Council of Carpenters through City View Blinds and Abalene Decorating. He failed to remit the required contributions, which amounted to $50,162, stated the complaint.