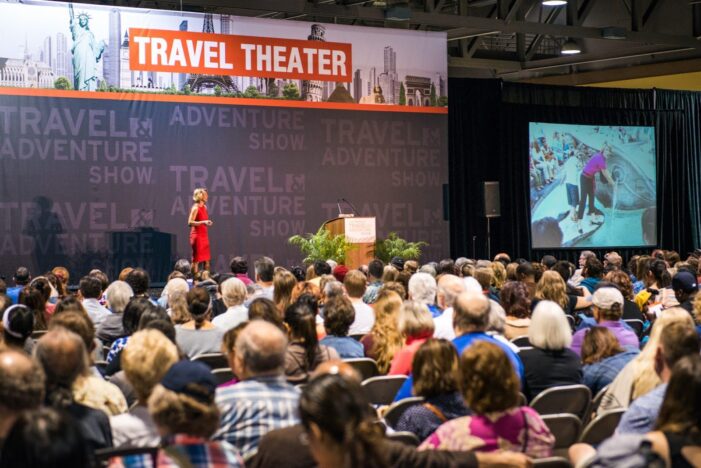 NEW YORK CITY, April 4, 2022 – New Yorkers are ready to travel again as shown by the Travel & Adventure Show which debuted its fifth live event in 2022 in New York on March 18-20 welcoming over 14,000 travel-savvy consumers, over 200 exhibitors, over 250 media attendees and nearly 2,200 trade delegates manning hundreds of exhibits from around the globe. The show gave attendees an opportunity to engage with destination representatives, tour operators and travel companies offering up travel ideas and inspiration as travel rebounds. Attendees were even invited to take advantage of special deals and promotions on the spot to make their dream vacation a reality.

Following on the success of this weekend, Travel & Adventure Shows has officially announced the show will return in 2023 to the Jacob Javits Center from January 27 – 29. The next event promises to be bigger, with more exhibitors, more attendees, and more opportunities to be inspired to travel.

“As the travel industry emerges from perhaps its most challenging years in history, we could not be more excited to have helped lead so many storied travel brands, destinations and suppliers back to a proactive environment,” stated John Golicz, CEO of Unicomm, LLC, the event’s producer. “Our New York debut was our fifth live show in five consecutive weekends, and we were overwhelmed by the reception we received by a very eager crowd of New York travel enthusiasts. We’ve already secured January 27-29 at the Javits to bring the show back even bigger and better with a larger showroom, more exhibitors, speakers and additional interactive opportunities for attendees.”

The New York Travel & Adventure Show kicked off with a Travel Trade Summit on Friday, March 18th which invited travel industry experts, tour operators and travel agents for a day of informative panels, sessions and discussions before an unveiling of the expo floor. Hosted in partnership with Travel Market Report, the Summit offered a myriad of industry-specific content taking place across four separate stages giving attendees a choice of three keynote and eight breakout sessions. A VIP Networking Reception was held on the Show Floor Friday evening, as exhibitors and trade members spent a couple hours discussing ongoing travel plans and trends right on the show floor. Overall, over 500 members of the travel trade and media came to the 1st annual Travel Trade Summit at the New York Travel & Adventure Show.

Then Saturday and Sunday the Show opened to consumers for an exciting two days of travel seminars, exciting trip giveaways and special on-the-spot deals that many consumers took advantage of. Over the course of the two days, roughly 14,000 consumers attended the first ever New York Travel & Adventure Show and for next year’s event the organizers are anticipating even greater numbers as the pandemic recedes and travel reaches new heights.

Show sponsors included Major Sponsor Cruise Planners, The Islands of the Bahamas and Royal Caribbean were supporting sponsors, Croatia National Tourist Board was the event’s featured exhibitor as well as an international destination sponsor for the Travel Trade Summit. The Dominican Republic Ministry of Tourism was also an international DMO sponsor for the Travel Trade Summit, as well as a supporting sponsor of the event. Bronze sponsors for the Travel Trade Summit included the Israel Ministry of Tourism and ProColombia, and Fort Myers Islands, Beaches and Neighborhoods was the official cocktail reception sponsor. The Florida Keys & Key West sponsored the green screen photo booth.

Over 40 live consumer-focused travel seminars allowed what would-be-travelers to re-hone their skills, learn about what has changed in travel since the pandemic, what destinations are in demand and even how to take better travel photographs. Our four dozen speakers filled the four on-floor stages featuring top travel celebrity personalities including: actor, director and award-winning travel writer, Andrew McCarthy; CBS News travel editor and Emmy award-winning investigative reporter, Peter Greenberg; Editorial Director of the Frommer’s Guides, Pauline Frommer; Emmy award-winning host of Samantha Brown’s Places to Love, Samantha Brown; bestselling author of “1,000 Places to See Before You Die,” Patricia Schultz; and “The Points Guy,” Brian Kelly, all spent time discussing the new travel normal in front of hundreds of eager travelers.

“As New Yorkers welcome back tourists to their city, many are also eagerly planning for trips that they’ve put off, so the energy from our attendees was palpable and invigorating. They are ready for their next adventure so what better way to decide where to go next than with the chance to personally discuss their travel plans with the people from destinations from all over the world, all in one place,” said Jonathan Golicz, Vice President of Unicomm, LLC.

Recognizing that while travel is important to people and industries around the world, it is also a privilege and helping people in a fundamental way is the most important thing one can do, Travel & Adventure Shows CEO John Golicz welcomed a representative from the office of the Consulate General of Ukraine in New York to announce that all proceeds from the Travel Trade Summit would be donated to assist the refugees of Ukraine ensuring they receive critical humanitarian assistance.