The U.S. ‘No Daily Cleaning‘ Hotel Policy and Impact on Jamaicans & Other Immigrants 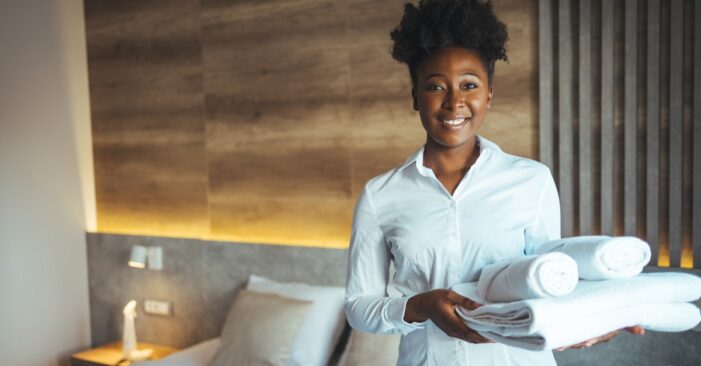 Summer is officially a few weeks away, the time of year when people get out of the house and bask outside with friends and family. The United States celebrates the last Monday in May as Memorial Day. It is considered the unofficial start to summer.

It is a time filled with travels and leisure, with people exploring different places and locations. One of the critical things associated with travel is hospitality, explicitly staying in hotels and resorts.

Hospitality Business and COVID-19 Pandemic
Like other businesses, the sector experienced significant changes driven by the pandemic. Before COVID-19, hotels ran various services that catered to their customers’ needs. They had a lot of staff, including housekeepers, to ensure that their customers had the best experience while on their property. These jobs served as a source of livelihood for many immigrants, especially women. However, travel restrictions and country-wide lockdowns greatly impacted the industry during the pandemic.

Thus, forcing players within the sector to reinvent themselves. During the period in the United States, some hotels voluntarily became alternative facilities. They provided accommodation for hospital networks and healthcare staff, allowing them to reduce their commute times and hosting emergency staff.

They focused on implementing thoughtful and strategic practices that helped protect their cash position, including staff furloughing, layoffs, and catering to the customers’ changing needs, which lasted beyond the pandemic.

Housekeeping policies varied across U.S. hotel companies. Many updated their cleaning guidelines to follow the Centers for Disease Control and Prevention guidance. Which stated that hotels should not clean guest rooms occupied by the same customer over multiple days unless requested.

At the time, to enforce safety protocols and promote social distancing, many hotels switched to offering room cleaning only if a guest requested or after staying a certain number of days. The hotel guests could leave trash outside their door and call the front desk for clean towels. Other hotels started experimenting with less frequent cleaning to promote sustainability, which became more widespread early in the pandemic.

Post-Pandemic
However, it’s been two years since the pandemic, and Aon’s survey reports that over 35% of hotels expect to recover in this time and beyond.

Many hotels across the United States, including 4-star hotels like the Hilton Hawaiian Village, have maintained the same operation by no longer offering daily housekeeping services like trash collection, replacing the bed linen, wiping furniture, cleaning toilets, and bathtubs except requested. Even as safety restrictions fade and demand grows across the country as travel season peaks, many hotels keep their new cleaning policies.

For New Cleaning Policies
Hotel management, in their defense, claims customer preferences drive the policies. At the same time, other stakeholders differ in opinion. They say that management’s quest for profit is influencing the new policy. They cited that there has been no staff hired in over two years. Instead, they remain in ‘on-call’ status, where many await a call to confirm there’s work for them. In an interview with ABC News, the UNITE HERE Hotel Workers Union President, D. Taylor said, “The policy is about more money in the owners’ pocket. They put a greater workload on frontline workers and eliminate jobs.”

In an interview with the Associated Press, President & CEO of the American Hotel & Lodging Association, Chip Rogers, said it was the demands of guests and not hotel profits that guided decisions about pandemic housekeeper services. “Many guests, to this day, don’t want people coming into their room during their stay,” he said. “To force something onto a guest that they don’t want is the opposite of working in the hospitality industry.” Furthermore, he explained that the pandemic changed the standard of most hotel guests wanting daily cleaning. He said it’s not clear if that will result in a permanent shift.

Impact on Immigrants & Exploited Workers
While many housekeepers have lost their jobs due to the reduced work, others still employ them, revealing that they have fewer hours with a gruesome workload.

Most of the unemployed and overworked housekeepers are mainly immigrant women. They are still confronting the aftermath of lost work caused by the pandemic’s shutdowns. In another report by the Washington Post, they spoke to Luis Espejo about the effect of the policy change. “It’s a big change for us,” she said, “We are so busy at work now. We cannot finish cleaning our rooms.”

Brian Figeroux, Esq of Ask the Lawyer Radio Program (www.askthelawyer.us) spoke on the issue of exploited hotel workers: “When we come to America, we want to improve our lives. We want to earn more income to help ourselves and the families that we left behind in those different corners of the globe. We are black, and we are Latino. We have different languages, but we all came here for the same purpose. Now, the Welcome to America-it varies. What does Welcome to America mean? Who is welcome to America? What is our plight here? How are we treated? And if we look at the different types of workers that contribute to America, we need to understand those workers’ experiences. One of the areas that we work in is as hotel workers, whether in the north, the south, the east, or the west.

We clean hotel rooms, and cleaning hotel rooms is no easy task. They are dirty. People with more wealth stay in those rooms. The rooms that we clean may not even be able to afford to stay in those rooms, except obviously, if we are cleaning them. A couple of years ago, many Jamaicans who came to the south had a lawsuit against those hotels stealing their wages. Imagine that you are a hotel worker from another country. You’re here on the H-2B visa.

Imagine those who came here without inspection working, undocumented in these hotels. So, what they did was give us a number of rooms to clean within 8 hours. That wouldn’t take 8 hours but will take at least 16 hours. So, half our wages will go because it’s not physically possible to clean these hotel rooms in 8 hours. It requires 16 hours. And since the pandemic, many of these workers were not working because hotels were shut down. Many of these workers, Black, Latino, and Asian, have been exploited. And what does exploitation mean? Again, given a task to do in 8 hours that requires 16 hours.

Sometimes the equipment used is not modern, so it takes even longer. And these workers work very hard. And the money that they get goes back to their home countries. In Jamaica, the number one foreign currency earner is remittances. In Mexico, it’s over $22 billion a year. And the list goes on the countries that we come from that we send money back to. In fact, we say that many of us have barrel children back home. What does that mean? Those children depend on the barrels that we stuff with food and clothing, and other things for them to survive at home. Sometimes entire villages in other countries where our children live depend on remittances for good economic activity. And the countries need that foreign currency to purchase goods and food services from other countries because that’s how you pay for goods and services in our country using the U.S. dollar reserves.

We need to have unions that can protect them. We need non profit organizations that will help them with essential services like learning how to speak English, whether they’re from Haiti, which is close to us, or Latino countries. We must think about those people. Because no one is thinking about them.“

Hotel Housekeeping Policies & Unions
Generally, housekeeping policies vary across hotel establishments based on the type of hotel. For instance, luxury hotels provide daily housekeeping unless guests opt-out of the service. Some guests prefer not to request housekeeping during their stay, choosing to pick up after themselves.

While many hotel brands outside of the luxury, five-star market are shifting toward an opt-in model for daily housekeeping. However, unionized hotel workers are trying to get the message across to guests that when they turn down daily room cleaning services, it threatens their jobs and source of livelihood.

In some locations such as New Jersey, hotels are required by law to offer daily cleaning, which some guests still turn down, while New York does not have an explicit policy addressing the issue, thereby jeopardizing the housekeepers’ jobs, “When I come home from work now, “says Martha Bonilla of New Jersey, “I only want to go to bed because I am physically exhausted.” So, she asks guests to demand daily cleaning to make her job less tedious.

The hotel housekeepers further shared that when the hotel rooms are unclean for days, it is harder for them to restore the room to the pristine state that most guests expect when they check-in. According to Elvia, another hotel housekeeper, “The work becomes harder if you don’t clean a room for many days,” she said. “You will have several days of scum in the bathrooms,” she added.

In some cases, working fewer hours means fewer benefits or not qualifying for additional benefits such as health insurance. Several workers in this category consider leaving the job but can’t because they have children in school. There are fewer job options with conducive flexible hours for workers with younger-aged school children.

Politicians should address this hotel policy. They should advocate for the poor working conditions and other affected workers, mostly immigrant workers. Several first and second-generation immigrants work as housekeepers and are affected by the non-daily room cleaning policy.

As guests, returning to a clean hotel room is part of the paid experience and should not be a hassle while on a trip. Every guest should be aware of the consequences of taking up your hotel’s ‘opt-out’ housekeeping policy. It means returning to a room with no clean towels, a messed-up bed, trash, and a dirty bathroom.

While such minor incidents can affect a guest’s broad experience, ideally, it shouldn’t be a concern. You pay as a hotel guest to be pampered rather than bothered about the room’s state and towels. Despite the acclaimed staffing shortages, respect for social distancing, or management’s way of saving money, a hotel differs from home, and maintaining top-notch housekeeping services is critical.

Therefore, next time you decide to ‘opt out’ and accept alternate room cleaning, remember that you are encouraging substandard services. You have accepted to stay in filthy rooms, facilitated painful workloads for few hired staff members, and lost income for hotel housekeepers and immigrants.