The Biden Administration Let Over 200,000 Green Cards Go to Waste This Year 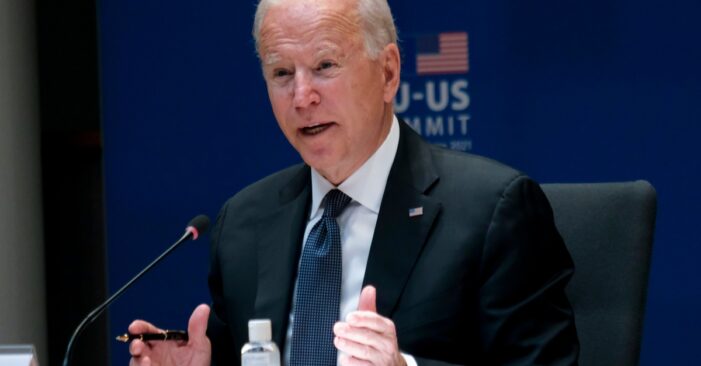 President Joe Biden arrives for the United States-European Union Summit at the European Council in Brussels, Belgium on June 15, 2021. (Shutterstock)

The Biden administration failed to issue more than 200,000 permanent resident visas (or “green cards”) that were allotted in fiscal year 2021 for immigrants sponsored by U.S. employers or family members. Roughly 150,000 visas for family-based immigrants and as many as 80,000 visas for employment-based immigrants had gone unused by September 30, which was the last day of the 2021 fiscal year. This falls drastically short of the total number of green cards—675,000—that the government can issue each year. Out of this total, 480,000 visas are reserved for “family preference” immigrants; 140,000 for employment-based immigrants; and 55,000 for Diversity Visa lottery winners. This marks the second year in a row that over 100,000 family-preference visas have gone unused.

In 2020, the COVID-19 pandemic caused U.S. embassies and consulates abroad to close, which temporarily halted immigrant visa processing. In addition, the Trump administration used the pandemic as a pretext to implement a ban on the issuing of many immigrant visas. As a result, 122,000 family-preference visas went unused and were added to the 2021 cap on employment-based visas, which raised the total to 262,000.

The 150,000 unused family-preference visas have been added to the fiscal year 2022 cap on employment-based visas, bringing the total to 290,000. But the unused employment-based visas from fiscal year 2021 will remain lost without Congressional action. The federal government’s repeated failure to meet the annual caps on immigrant visas is worsening the backlog of green card applications.

As of 2020, there were more than 9 million green card applicants stuck in the backlog—about 7.5 million on the family-based side and 1.6 million on the employment-based side. A major reason the backlogs are so large is the per-country cap on immigration. Under current immigration law, the number of immigrants from any one country cannot be greater than 7% of the total number of immigrants who come to the United States in a single year.

This arbitrary cap doesn’t account for the strong social and economic relationships that the United States has with certain countries. For instance, the 7% cap does not come close to meeting the demand from U.S. citizens and Lawful Permanent Residents who want to bring family members from Mexico to the United States.

Many employment-based applicants from India have been waiting between seven and 10 years. If the slow pace of green card processing continues, immigrants will likely see their wait times soar in the years ahead. Congress needs to act before more people lose available green cards and the backlogs worsen.