The Anti-Immigrants Don the Cloak of Trumpism, Again 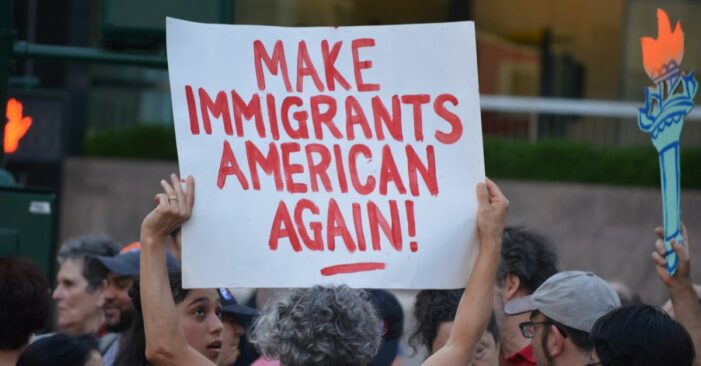 In the United States, Trumpism salivates over the prospect of achieving, in the short term, control of Congress, and with its eyes on the White House, in the medium term. This way, nativism and intolerance continue to gain ground in this country. The ever more constant campaign messages of those who return to the tired old rants against migrant minorities invoke a hint of racism, multiplied by five, which once again shakes the foundations of democracy.

This is not only occurring here, but in other democracies across the world, as the presidential election in France showed this past Sunday.

Emmanuel Macron, importantly, won reelection, but the extremist Marine Le Pen obtained more than 40% of the vote, similar to the 42% of the U.S. population that continued to support Donald Trump in 2020. In fact, Le Pen increased her support among French voters compared to 2017, when she was backed by 34% of the electorate.

The international reaccommodation of the extreme right, based on surreptitious political messages of supposed national “salvation” is of course, unsurprising. What is alarming and, at the same time, angering, is that even today, in this 21st century, when the world is supposedly on a path toward greater equality in all ambits—starting with human rights and liberties—there are large segments of the population that are inclined to take the world and its history backwards.

Like Macron, Biden won the 2020 election, yes, but the monsters of racism, prejudice, and xenophobia continue, alive and kicking. For example, Trump’s recent public appearances before his followers prove it, like what happened last weekend in Ohio. There, the ex-President pulled the rabbit out of a hat, like he always does, to revive the fanatics that surround him, saying that during his presidency his Mexican counterpart, Andrés Manuel López Obrador, “bowed” to his imposition of the “Remain in Mexico” program. Accustomed to lying at every opportunity, Trump used highly prejudiced language to deliver a level of humiliation, not exactly to the Mexican leader, but to the thousands of migrants from different corners of the world who are seeking asylum and who Trump stopped in their tracks, establishing the most draconian migration policies in contemporary U.S. history.

This week, we continue to see the media circus unfold with a delegation of ten Republicans traveling to the border between Mexico and Texas. The Republican Minority Leader, Kevin McCarthy, came to the border to give us his daily dose of demagoguery and lies. They went to defend the maintenance of Title 42, as if a public health law could substitute for the comprehensive reform of our migration laws that his party has systematically blocked for decades; because it is a fact that Republicans do not want real solutions, but to exploit the issue and immigrants to rack up political points with the base that sustains them.

In fact, the resurgence of anti-immigrant sentiment—which was never really sleeping, but has been crouched in wait for an opportunity that those who maintain latent Trumpism present—can be felt once again all over the country. Trumpism: that political anomaly that still has the Republican Party hamstrung, in a country that is beginning to come out of the prolonged lethargy that the pandemic and its consequences represent.

And that is another similarity with the French extreme right, personified by Le Pen: immigrants are their favorite scapegoats. They know how to exploit disaffection of groups of workers facing job losses in industrial and manufacturing sectors, as in the United States. With this picture of inequality, it’s easy to find someone to blame, and the Immigrant is always their favorite piece in their convincing and cynical game of political chess.

Le Pen is a cheerleader for Trump, Russian President Vladimir Putin, and the Prime Minister of Hungary, Viktor Orban, three characters whose image right now, at least in the West, is not exactly a model to follow. And she won almost 42% of the French vote! This is another sign that the fragility of democracy, and especially the loss of values in favor of the most elemental human rights—the rights to migrate and seek asylum—is not exclusive to the United States.

Unfortunately, this disgusting recipe of nativism and racism that the Republican Party has perfected, wearing Trump’s uniform, will be put to the test yet again in the November midterm elections, where immigration is positioned, once again, as the Republicans’ favorite issue to use against Democrats, accusing them of being in favor of “open borders” and “chaos.”