Temporary Protected Status: What You Need to Know 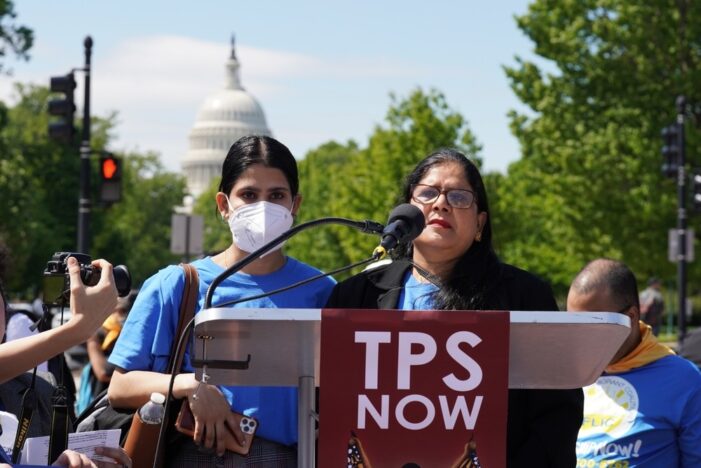 Washington, DC – May 11, 2022: A TPS activist calls upon the Biden administration to make good on the promise to protect those in the program and create a path to citizenship. (Shutterstock)

A recent and unexpected surge of migrants that began as early as May has arrived in New York City, causing a swell of people staying in NYC shelters. In a briefing, Mayor Adams addressed the current wave of nearly 3,000 newly arrived migrants. Mayor Adams, Department of Social Services Commissioner Gary Jenkins, and other officials address the surge asking the Federal Government for assistance in the matter. Many people travel to the United States on different types of visas. However, there are special visas, like the Temporary Protected Status (TPS) visa. It serves as a humanitarian solution by providing the nationals of certain countries who are experiencing problems that make it unsafe for deportation to those countries. Ten countries currently benefit from this arrangement. The U.S has granted citizens from the following countries (in approximates) Afghanistan, Ukraine, Venezuela (320,000), El Salvador 252,000), Honduras (80,700), Haiti 56,400), Nepal 14,600), Syria (7,000), Nicaragua (4,500), Burma (1,600), Yemen (1,400), Sudan (805), Somalia (400), and South Sudan (80) such benefits under the program. Since the program’s inception, the U.S. government has granted TPS to nineteen countries, including Rwanda, Sierra Leone, Angola, Herzegovina, Bosnia, Kuwait, and Liberia. Recently, Haitians, Burmans, and Venezuelans qualified for the program, and there are over four hundred thousand TPS holders in the country.

What is the Temporary Protected Status?
TPS, as popularly known, is a temporary designation that allows beneficiaries to reside in the U.S lawfully. Also, it grants multiple entries into the country, for the duration of the emergency, without dreading the possibility of being placed into removal proceedings for lacking a visa or status. Migrants from the designated countries can legally reside in the United States for up to eighteen months, although not considered lawful permanent residents or U.S. citizens. Many migrants have lawfully lived under the program for several years in the United States. Additionally, TPS recipients can apply for permanent residency designations separately if eligible.

How It All Started
George H.W. Bush enacted the TPS program under his administration in 1990. Hence, eligible citizens or nationals from select countries to maintain refugee status, work authorization, temporary juridical immigration, or protection from Department of Homeland Security (DHS) deportation. The U.S. Congress approved it as a program that allows migrants whose home countries are unsafe the right to temporarily live and work and, though for an extensible duration in the country. It is renewable with designated periods ranging from six to 18 months; however, the U.S. government can renew the status indefinitely.

Congress endorsed the program as part of the Immigration Act of 1990 as humanitarian relief to citizens of countries suffering natural disasters, protracted unrest, or conflict. Salvadorans fleeing civil war were the first to benefit from the program. For countries to qualify for this program, they must be experiencing an environmental disaster such as drought, hurricane, or earthquake, armed hostilities like civil wars, or there must be proof of abnormal emergencies that considerably affect citizens. Consequently, once a country’s designation expires, the beneficiaries return to their original immigration status before receiving TPS. Most often, it is an undocumented status, accompanied by the threat of deportation to their country of origin. The few options available include applying for temporary work or student visas. Those whose adult children or spouses are citizens or legal residents could become eligible to stay legally in the country.

Process of Awarding a TPS
The combination of the U.S. Attorney General and the Secretary of Homeland Security is responsible for renewing, designating, or eliminating a country’s TPS eligibility. The Secretary can extend TPS after a review of a country’s conditions to a 6-, 12- or 18-month extension made 60- days before the expiration of the TPS designation. While the Secretary of the DHS grants eligible foreign-born individuals the status when they apply, an extension only applies to those who already have TPS status. Foreign nationals who arrive after the designated start date are eligible for status if TPS is re-designated for their country.

Challenges to the TPS
The program has received bipartisan support from Democrats and Republicans since its creation over three decades ago, but it has also sparked controversy. Former President Donald Trump sought to end TPS for many migrants to restrict immigration. Still, the attempt was challenged in court, causing delays.

The Debate Over the Policy
Supporters of TPS affirm that it serves as an effective humanitarian tool for people living in the United States who cannot safely return to their home countries. For example, El Salvador and Honduras remain the world’s most dangerous countries; civil wars and humanitarian crises still ravage South Sudan and Yemen, while Russia continues its assault on Ukraine. Therefore, supporters of migrant rights are pushing for a TPS reform to make it easier for migrants to obtain permanent residency.

Economic experts claim that the program has economic benefits as having a larger employed immigrant population is beneficial. At the same time, removing TPS holders will hurt the economies of U.S. cities where many TPS beneficiaries reside.

Alternatively, critics argue that an originally temporary designation should not become an automatic permanent program. Some policymakers maintain that ending TPS designations after a set period is consistent with the program’s goal of providing a temporary haven for individuals rather than a path to permanent residency.

The Biden Administration
Despite the arguments, President Joe Biden granted TPS status to four additional countries after assuming office. In March 2021, the Bidens administration gave TPS designations to Myanmar and Venezuela due to ongoing humanitarian crises. It announced a new eighteenmonth appointment for Haiti following weeks of political unrest there in May. DHS also extended TPS benefits for nine other countries, including Nepal, El Salvador, and Somalia, due to COVID19. In March 2022, Afghanistan and Ukraine became eligible after Russia invaded the latter; and South Sudan’s conditions worsened. DHS extended protections to South Sudanese. In June 2021, the Supreme Court ruled that becoming a TPS holder does not override a previous unlawful entry into the country. The ruling disqualified many migrants seeking to transition from TPS to permanent residency.

Quick Facts About Temporary Protected Status (TPS)
Who is Eligible for TPS?
The nationals of a designated country file for status during a specified registration period and have been on the ground in the U.S. since a fixed date receive TPS. Who Grants the Status Both the U.S Attorney General and the Secretary of Homeland Security to the Country have the authority to designate a country, but the Secretary of homeland security to individuals. What are the Benefits of TPS? TPS holders cannot be removed from the U.S. nor detained by DHS based on their immigration status They are eligible for travel authorization and an employment authorization document (EAD).

How Many Individuals Currently Have TPS?
Over 400,000 foreign nationals from Afghanistan, Venezuela, Burma, El Salvador, Honduras, Nicaragua, and Central Americans make up the majority of TPS holders.

Where Do Most TPS Holders Live Within the United States?
While they reside all over the country, most live in six states: California, Florida, Texas, New York, Virginia, and Maryland. They also reside in Washington DC, Los Angeles, Miami, Houston, and Boston. Many TPS migrants who live in New York are from El Salvador, Honduras, and Haiti.

How Do TPS Holders Contribute to the U.S. economy?
The annual pre-tax salary or wage contributions of TPS holders from El Salvador, Honduras, and Haiti is over $4.0 billion to the nation’s gross domestic product. They also contribute over $6.5 billion over ten years to the overall Social Security and Medicare contributions.

Countries with Current TPS
According to a DHS report of March 2021, over 300,000 migrants from ten countries reside in the United States under TPS. The number is expected to grow to over 500,000 since President Biden’s extensions for South Sudan and Haiti, and new designations for Venezuela, Afghanistan, Ukraine, and Myanmar.

What Happens to TPS Holders of Terminated Designated Countries’?
While an average TPS recipient can spend over two decades in the United States, those whose country’s TPS designation is expiring have fewer options to remain, especially previously undocumented residents.

Presently, several lawsuits challenging the terminations of TPS, such as for Haiti, Honduras, and Nepal, are pending as the court has blocked them, so the situation remains unclear.