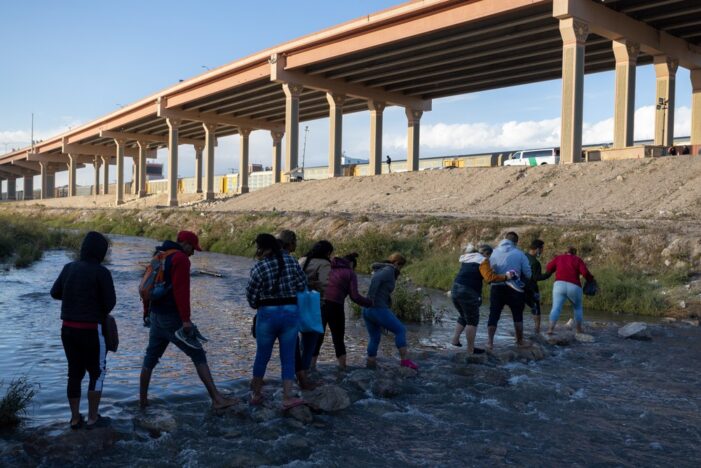 Juárez, Chihuahua, Mexico 11-16-2022: Hundreds of Venezuelan migrants crossed the Rio Bravo after the judge announced the suspension of title 42, to request humanitarian asylum in the United States. (Shutterstock)

President Biden continues to uphold Title 42, which was exploited as a necessary measure during the Covid-19 pandemic by the Trump Administration but was merely used to ban asylum seekers.

A report released by a Select Subcommittee on the Coronavirus Crisis details how the Trump Administration interfered with the CDC’s public health positions to further their political objectives. This includes closing the southern border by justifying Title 42, a central objective of the Trump administration.

The former administration positioned itself within the CDC to try and control any Covid-19 related broadcasts. CDC experts and doctors dealt with “bully-ish behavior” and were snubbed whenever they attempted to advocate for “public health policies that went against the Trump Administration’s perceived political interests.”

The detailed report includes the statement of Dr. Martin Cetron, the director of CDC’s Division of Global Migration and Quarantine. Cetron states that Title 42 was not proposed by himself or anyone on his team but was “handed” to them by someone in Trump’s administration.

In March 2020, the CDC issued the order for Title 42 of the Public Health Services Act, forcing specific individuals seeking asylum protections at the US-Mexico borders to be deported and wait in Mexico. The reason was that it was “necessary to protect the public health from an increase in the serious danger of the introduction of Coronavirus Disease 2019 (COVID-19).”

CDC experts disagreed that the ruling had a strong enough public health foundation. Experts said there was no evidence the motion would slow the coronavirus. The move triggered close to 150,000 children and adults to be expelled from the country.

“We gathered data on the reported incidents of the disease in these populations. We scoured available international data. My team that works physically on the border, including the U.S.-Mexico unit and others with a lot of experience, we could not substantiate that the threat was, quote/unquote, being addressed by this,” said Cetron.

Despite all this, Biden and his administration continue to whitewash Title 42 and use it as an excuse to block asylum seekers from entering the country. The same policy that this administration promised to end.

The administration says those seeking asylum should follow the CB1 app application process. They must wait before coming to the United States, forcing those who want to leave their country for many reasons to remain there, putting their lives at risk. The administration threatens that migrants will not be allowed entry if they attempt to cross the border while waiting.

“If [migrants] attempt to cross into the United States unlawfully, they will be returned to Mexico and will not be eligible for this program after that.”

DACA Under Threat
Additionally, to lessen the possibility of DACA recipients or past recipients of DACA being deported, the Biden Administration should rework its discretionary enforcement agenda, policies, and objectives.

The decline is the result of some DACA recipients changing their status through marriage to a citizen of the United States or acquiring a visa; other recipients may have lost their status due to criminal activity; still, others may not have had time to reapply. Some may have also passed away, and others may have fled the nation.

According to current estimates, 1.2 million immigrants would be eligible for DACA. Mexican immigrants have applied to the program at far higher rates than Asian immigrants, particularly South Korean immigrants, who have used it at significantly lower rates.

Judge Hannon might reject DACA, as many commentators have predicted. The program might expire during the following two years if there is no congressional action.

The Biden administration must file an appeal if that occurs.

The most crucial aspect of this situation would be that these migrants or immigrants could gradually lose their status. As a result, the economic and social advantages they have attained would fade, and men and many or even some of them might consider returning to their country of origin, specifically Mexico.

Per-country Caps
Moreover, Congress must create an equal per-country cap, as many skilled workers need help with the backlog. A CATO institute study shows that if they could remain in the queue forever, skilled migrant workers from India would delay the backlog for up to 90 years and 44 years for Chinese migrants.

As a candidate, Biden pledged to double the number of immigration judges to hasten the processing of those cases. Although it has expanded, the administration has not doubled its numbers as promised. There were approximately 517 immigration judges in 2020, the year before Biden was elected president; there have been 634, a 23% rise since that time.

The decision to expand Title 42 is a sordid move from the Biden administration, especially since they criticized the previous administration, who undoubtedly used a racist immigration agenda masked as a public health issue to deny asylum to those that need it most.