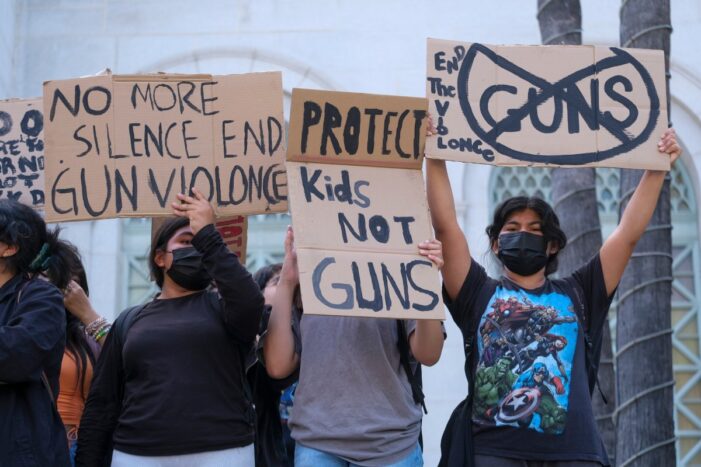 Students from Miguel Contreras Learning Center high school protest in front of City Hall after walking out of school to protest gun violence in Los Angeles, May 31, 2022. (Shutterstock)

(Albany, NY) Today, the Senate Democratic Majority is passing legislation to strengthen gun safety measures and ensure deadly weapons stay out of the wrong hands. The proposed legislation will update the criminal code to make the threat of mass harm a crime; require microstamping of ammunition; strengthen measures to prevent those with criminal backgrounds from obtaining guns and ammo; allow health care providers to file extreme risk protection orders, and strengthen regulations for high capacity ammo, feeding devices, and body armor. It would also more broadly define the term “firearm.”

Less than halfway through 2022, the United States has already endured over 200 mass shootings, with guns ranking as the number one cause of death among kids and teens. This public health crisis stands alone as one that could help be prevented with effective leadership. Gun violence rips through the fabric of every American community, and puts all citizens at unnecessary, increased levels of danger. The New York Senate Majority is building on its strong record of gun safety by advancing responsible and effective firearm regulations to end these avoidable tragedies.

Senate Majority Leader Stewart-Cousins said, “Our nation has been brought to a moment of reckoning due to weapons of war that have been too easily accessed by those seeking to kill. These weapons have made places in our communities like schools, grocery stores, houses of worship, and concerts, places of carnage. In these devastating times in New York and across the nation, we have worked with Governor Hochul, Speaker Heastie, and members of the Democratic Legislature to step up and send a message that this path of gun violence is unacceptable and we need real change.”

The legislation being passed by the Senate Majority includes:

Bill sponsor Senator Jamaal Bailey said, “In the wake of tragedy after tragedy and countless lives lost to the epidemic of gun violence, we cannot wait for another Buffalo or Uvalde to act. Time and time again, we’ve seen the devastating consequences of online hate and violent extremism going unchecked. My bill will establish a dedicated task force within the New York Attorney General’s Office to investigate the proliferation of violent extremism online and the use of social media platforms to plan, facilitate, and promote acts of domestic terrorism. The bill will provide the State with tools to seek accountability for bias-related violence and intimidation. Together with my colleagues’ bills to require licensing for possession of a semiautomatic rifle, strengthen background checks for gun and ammunition sales, and improve the reporting of hateful social media, this legislative package will be a major step forward to curb the crisis of gun violence and save lives.”

Bill sponsor Senator Brad Hoylman said, “We must do everything in our power to continue to crack down on illegal guns in New York. Our efforts today won’t return the 10 lives lost in Buffalo at the hands of a white supremacist, or the 19 beautiful children in Texas, but we honor their memories with this package of gun safety bills, and I am honored two of my bills are included. Our microstamping legislation (S.4116A/A.7926) would require gun manufacturers and dealers to imprint a traceable serial number on spent ammunition and help law enforcement clear gun crimes. And our large capacity ammunition bill (S.9229A/A.10428A) will close a legal loophole that made it previously difficult to prosecute these illegal gun owners. These laws can create a greater sense of security among the public, serve the public interest and public safety in ways other than by reducing deaths and physical bodily injury alone, including by addressing psychological harms, and ensure that Americans and their families have the security equally to enjoy the full range of constitutional freedoms. I applaud Senate Leader Andrea Stewart-Cousins and the numerous anti-gun violence organizations for getting us here. This is how we get guns off our streets.”

Bill sponsor Senator Todd Kaminsky said, “Those who threaten to inflict mass harm on the public must be held accountable. Courts in our state have blocked prosecutions of those who make serious threats against our schools, synagogues and businesses. By passing my bill, we are empowering law enforcement to prosecute those who make such threats to the fullest extent of the law. Our children’s and our neighbors’ safety demand nothing less.”

Bill sponsor Senator Anna Kaplan said, “The racist domestic terrorist who murdered 10 innocent Black New Yorkers in a Buffalo supermarket was radicalized online in an environment where hate speech is encouraged and where there are few options for people of good conscience to sound the alarm about what’s going on there. We all know the expression “if you see something, say something,” but unfortunately, many social media platforms make it impossible to speak out when you see something dangerous or harmful online. My legislation will empower social media users to keep virtual spaces safer for all by providing clear and consistent reporting mechanisms to flag hate speech, and with the devastating consequences of hate all around us getting worse by the day, we need to take this action right away.”

Bill sponsor Senator Brian Kavanagh said, “By enacting this legislative package, we are demonstrating our ongoing commitment to protect New Yorkers from the scourge of gun violence by working to ensure that we have the strongest, most comprehensive gun violence prevention laws in the nation. We will never fully rid our country of atrocities like the horrific shootings in Buffalo, Uvalde, and around the country–or the day-to-day guns violence that plagues so many of our communities–until the gun industry and their allies in Congress and in many states act responsibly and stop blocking laws that would stop the violence. But our actions over the course of the last decade illustrate that we are able and willing to protect New Yorkers through laws and policies that have proven effective here and elsewhere. I commend and thank Governor Kathy Hochul, Majority Leader Andrea Stewart-Cousins, and Speaker Carl Heastie for their leadership, and our colleagues in the executive chamber and the legislature, the many advocates, survivors, law enforcement professionals, and gun violence prevention experts who have helped shape our understanding of what needs to be done.”

Bill sponsor Senator Luis Sepulveda said, “Changing the definition of firearms in the law to include ghost guns continues my years of fight to attack the tools of violence that plague our communities. For years, I have worked alongside Majority Leader Andrea Stewart-Cousins and my colleagues in the Senate to bring peace and tranquility to our people. I am proud to say that my bill S9456 reinforces the fact that, despite the many barriers, New York State is taking the lead and setting the example on issues that affect the entire nation. This and the other pieces of legislation in this package provide an immediate response to the problem of gun violence that is deeply harming our communities.”

Bill sponsor Senator James Skoufis said, “Our primary responsibility as lawmakers is to keep our constituents safe, and in the wake of so many horrific mass tragedies, I am proud that my colleagues and I have come together to improve gun safety in New York without infringing on the rights of law-abiding gun owners. My bill to extend ‘red flag’ reporting to healthcare providers will empower these professionals to act when an individual poses a clear danger to themselves or their community. I applaud my colleagues for advancing this package of reforms that will help keep New Yorkers safe.”

Bill sponsor Senator Kevin Thomas said, “New York has already enacted some of the strongest gun safety laws in the country, but today’s common sense legislation package is another step in the right direction. This bill would establish a prospective permit to purchase and possess semiautomatic rifles, which is something currently required for semiautomatic handguns, but not mandated for semiautomatic rifles. The tragedies in Buffalo and Uvalde showed us – yet again – that there is a correlation between mass shootings and young kids with unnecessary access to semiautomatic weapons, and this is absolutely something that must be changed. We will not stand by and wait for more New Yorkers to die before we enact logical gun safety measures at the State level. I am grateful to Majority Leader Stewart-Cousins for pushing this impactful legislative package; as well as for the community leaders, gun violence prevention advocates, and survivors who work tirelessly to keep New Yorkers safe. “

Rebecca Fischer, NYAGV Executive Director, said, “Faced with a surging gun violence crisis, Senator Andrea Stewart-Cousins and the Senate Majority have once again made it a priority this week to protect New Yorkers by passing a strong, life-saving slate of gun violence prevention bills. These measures will help keep guns away from people in crisis to prevent mass shootings, suicide and other gun violence, will require a license to purchase or possess a semi-automatic rifle anywhere in this state, and will provide law enforcement with a new tracing tool to stop gun trafficking and hold rogue gun dealers accountable. As New Yorkers and Americans, we should not have to fear gun violence on a daily basis in our neighborhoods or homes, in our subways, our supermarkets, our hospitals, our schools, our houses of worship, or anywhere else. While Congress continues to stall on meaningful national gun reform, we are grateful to have outstanding gun violence prevention champions leading our state government who are committed to keeping our children and all New Yorkers safe.”

Kris Brown, Brady President, said, “Following the horrific attack in Buffalo, the need for comprehensive and common-sense gun laws has never been clearer. The bills passed today will strengthen New York’s already robust laws, help to prevent gun violence in all of its forms and address the flow of dangerous firearms into communities. New Yorkers should be proud that their elected officials have swiftly prioritized public safety and passed these important bills, proving once again that New York is a model for the rest of the nation.”

Diane Rinaldo, a volunteer with the New York chapter of Moms Demand Action, said, “One thing is clear: a comprehensive approach to ending gun violence is critical to keeping New York communities safe. In the wake of tragic mass shootings in New York and across the country, New York has taken swift and decisive action by passing this package of important, common sense reforms. We are grateful to gun sense champions in the Senate, who continue New York’s legacy of leadership in the gun violence prevention movement, for their steadfast efforts to move these bills forward.”

David Pucino, Giffords Law Center Deputy Chief Counsel, said, “The bills passed today will improve gun safety in New York, closing gaps and strengthening the law. No single policy will make the shootings stop, but these bills represent critical progress towards protecting our communities from gun violence. We thank Governor Hochul, Majority Leader Stewart-Cousins, and Speaker Heastie for their swift efforts to pass this legislation in the wake of unspeakable tragedy. It is a testament to New York as a leader in gun violence prevention.