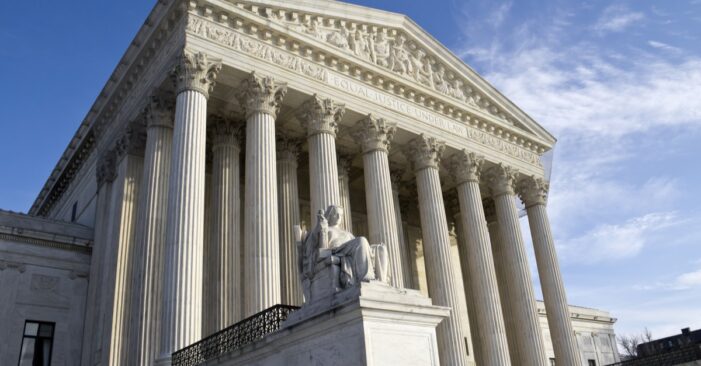 The Senate on Thursday voted 53-47 to confirm Judge Ketanji Brown Jackson to the Supreme Court.

Three Republican senators — Mitt Romney of Utah, Lisa Murkowski of Alaska and Susan Collins of Maine — joined all 48 Democrats and two independents in voting to confirm Jackson to the nation’s highest court.

Jackson, 51, will become the Supreme Court’s 116th justice and the first Black woman ever to sit on its bench.

The final tally — which was delayed by more than 15 minutes by GOP Kentucky Sen. Rand Paul’s absence — was met with applause in the chamber when Harris announced it.

“I am feeling overjoyed,” Harris told reporters as she left the Senate. “And I am feeling a deep sense of pride in who we are as a nation.

“I think it makes a very important statement about who we aspire to be,” she added. “On our highest court in the land, we want to make sure that there’s going to be full representation of the finest and brightest and best. And that’s what happened today.”

Of the 115 justices that have come before Jackson, 108 were white men, two were Black men, four were white women and one was a Latina woman.

“In the 233-year history of the Supreme Court, never, never has a Black woman held the title of justice,” Senate Majority Leader Chuck Schumer said in a speech before the vote. “Ketanji Brown Jackson will be the first and I believe the first of more to come.”

Jackson watched the vote unfold with President Biden at the White House on Thursday.

“Judge Jackson’s confirmation was a historic moment for our nation,” Biden tweeted. “We’ve taken another step toward making our highest court reflect the diversity of America. She will be an incredible Justice, and I was honored to share this moment with her.”

Biden and Harris will host Jackson at an event on the South Lawn on Friday to celebrate her confirmation.

Her confirmation comes less than two months after Biden introduced the federal appeals court judge as his pick to replace retiring Justice Stephen Breyer — fulfilling his campaign promise of appointing a Black woman to the Supreme Court.

Jackson won’t be sworn in until this summer, when Breyer officially retires.

When she does take her seat, the nine-member court will comprise four women — Jackson and Justices Sonia Sotomayor, Elena Kagan and Amy Coney Barrett — the most ever at one time.

It will also be the first time in U.S. history that white men won’t be the majority on the Supreme Court. The bench will include five men, four of them white.

Jackson, though, won’t change the ideological makeup of the court, as conservatives will still hold a 6-3 majority.

“So many children and generations to come will never know a Supreme Court without a Black woman,” said Keenan Austin Reed, co-founder of the Black Women’s Congressional Alliance. “I am excited about all the students who will now go to law school because of her and for all the brown babies that will be named Ketanji. Judge Jackson’s story is a story of perseverance, and I could not be more inspired or proud.”

“Today marks an important new chapter for America’s highest court — one that includes a Black woman,” said Dr. Deborah Turner, board president of the League of Women Voters. “Without a doubt, Judge Jackson’s appointment is a historic confirmation.”

Jackson was born in Washington, D.C., on Sept. 14, 1970. As a young child, she moved to Miami with her parents — graduates of historically Black colleges and universities who worked as public school teachers.

Jackson has credited her father with inspiring her to pursue law, as he became a full-time law student when she was 4 years old.

“My very earliest memories are of watching my father study,” Jackson said during her confirmation hearings. “He had his stack of law books on the kitchen table while I sat across from him with my stack of coloring books.”

She graduated from Harvard University and Harvard Law School, where she met her future husband, Dr. Patrick Jackson, a gastrointestinal surgeon. They married in 1996 and have two daughters, Leila and Talia.

Jackson will also be the first Supreme Court justice since Thurgood Marshall to have represented indigent criminal defendants.

She represented Guantánamo Bay detainees as a public defender and later worked on the issue in private practice.

In addition to her public defender work, Jackson served as vice chair of the U.S. Sentencing Commission, working to reduce the penalties for crack cocaine offenders.

She was appointed to that post in 2009 by then-President Barack Obama, the nation’s first Black president.

Obama also nominated Jackson to be a judge for the U.S. District Court for the District of Columbia in 2012. She was confirmed with bipartisan support in 2013.