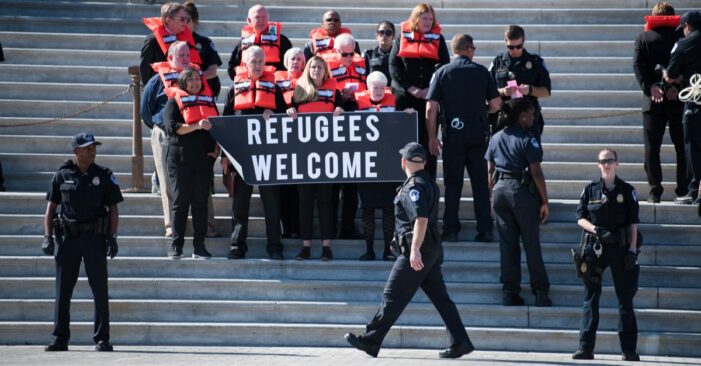 Activists participating in the Refugees Welcome protest rally on the steps of the US Capitol, wearing life preservers. They were each later arrested. – WASHINGTON – October 15 2019 (Shutterstock)

President Donald Trump on Wednesday formally committed the U.S. to accept up to 15,000 refugees this fiscal year, crystallizing a historically low refugee ceiling and sparking outcry among advocates.

The U.S. Department of State first proposed this fiscal year’s refugee ceiling hours before the 2020 fiscal year ended. Although the State Department predicted that 300,000 individuals would seek protection in the U.S. this fiscal year, only 15,000 would be accepted through the U.S. refugee program, which allows foreign nationals fleeing persecution to apply for protection from abroad.

Trump formalized that cap in a Wednesday presidential determination. “The admission of up to 15,000 refugees to the United States during FY 2021 is justified by humanitarian concerns or is otherwise in the national interest,” he said.

The current refugee ceiling is down from last year’s 18,000 refugee limit. However, the U.S. fell short of admitting that many refugees throughout the year, which Trump attributed to the ongoing national health emergency in the presidential determination.

Trump further detailed how refugee admissions would be allocated throughout the year.

The U.S. will accept 5,000 individuals fleeing religious persecution, 4,000 Iraqi citizens who have risked their lives to help the U.S. government and 1,000 people from El Salvador, Guatemala or Honduras. The remaining 5,000 refugee spots will be reserved for other specified groups, including individuals referred to the refugee program through a U.S. embassy and people from Hong Kong, Venezuela or Cuba, according to the determination.

Although Trump set these quotas, he noted that the admissions set aside for one group of people could be rolled into the admissions for any of the others, should the need arise.

However, the U.S. wouldn’t accept refugees from Somalia, Syria and Yemen, “except those refugees of special humanitarian concern,” he said.

“The threat to United States national security and public safety posed by the admission of refugees from high-risk areas of terrorist presence or control is significant and cannot be fully mitigated at this time,” Trump said.

The International Refugee Assistance Project, Refugees International, the Lutheran Immigration and Refugee Service and the American Civil Liberties Union all denounced the refugee ceiling in separate statements to Law360.

IRAP called Trump’s lowered refugee admissions an “abdication of humanitarian leadership” that ensures that few refugees would find safety in the U.S.

“The Trump administration has nearly destroyed refugee resettlement in America,” said Sunil Varghese, IRAP’s policy director. “The new [ceiling] will slow the number of admitted refugees to a trickle, despite the fact that communities from all 50 states have spoken out in favor of resettlement. This is not only a huge loss for refugee families, but also for the localities that host them, and for America’s standing in the world.”

Eric Schwartz, president of Refugees International, called the refugee ceiling “paltry,” but particularly took issue with the refugee restrictions on individuals from Somalia, Syria and Yemen.

“In a cruel and nasty way, President Trump today continued his ‘most Muslims need not apply’ approach to the U.S. Refugee Admissions program, doubling down on draconian restrictions on admission of refugees fleeing some of the world’s most dire human rights and humanitarian crises,” Schwartz said.

In a recent report, IRAP detailed the “extreme vetting” that refugee applicants from Muslim-majority countries must undergo under the Trump administration, The procedures slow down refugee resettlement and lead to more refugee denials, the organization said.