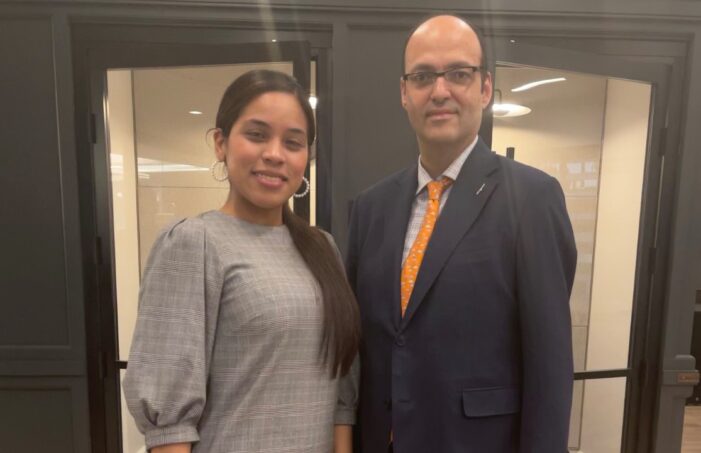 IQ Inc, publishers of Caribbean American Weekly, The Immigrant’s Journal, and Workers’ World Today, was honored to have been invited by ProColombia, the government entity responsible for promoting exports, tourism, and foreign investment, to attend The Market of Resilience Press Conference for Colombia at the Resilience Tourism Event. The press conference was followed by a cocktail hour celebrating 30 years of ProColombia. In attendance was ProColombia’s Vice President of Tourism, Gilberto Salcedo Rivero, ProColombia’s United States Tourism Director, Maria Jose Abuabara, Vice President of the Hispanic American International Chamber of Commerce (HAICC), Mariana Henriquez, and a few other members of the press.

During the press conference, Mr. Rivero and Ms. Abuabara spoke passionately about Colombia – “the most welcoming country on earth,” as described by Rivero. They showed marketing videos for Colombia and discussed the country’s tourism promotion campaigns over the years and how, despite the COVID – 19 pandemic, Colombia became one of the top booked travel destinations for the 2022 holiday season. Colombia also won 4 of the 14 awards it was nominated for, including best destination for LGBT travelers, best cruise destination, best Latin American travel destination, and ProColombia as the best travel marketing company.

Ms. Abuabara recalled when Colombia was not heavily promoting tourism. Since 2002, investors have started visiting Colombia, and ProColombia has worked closely with various Chambers of Commerce to enhance business travel. However, the 2016 Peace Agreement reportedly opened up more places in the country for travel.

Mr. Rivero said that ProColombia has promoted the destination with a “renewed speech and plan of action.” “Sustainability is a demand that’s seen now. Colombia is one of only 12 countries in the world that has a written established sustainable tourism policy,” shared Mr. Rivero during the press conference.

Today, there are reportedly 9,635 hotels in Colombia. It is marketed as a country with something for everyone – whether traveling for nature and adventure, luxury, cruising and nautical, culture, biodiversity, enjoying the sun and the beach, or wellness tourism. “Travel is exploring, connecting, and having experiences,” shared Maria Jose Abuabara.

Ms. Mariana Henriquez, Vice President of HAICC, who happens to be of Colombian descent, added that many people are flocking to Colombia nowadays to get affordable plastic surgery and to attend concerts. “Influencers are on social media promoting they will be in Colombia to attend concerts, and their fans are following them there,” said Ms. Henriquez.

Following the press conference, Mr. Rivero and Ms. Abuabara were joined by their colleagues from ProColombia, supporters of ProColombia, and their allies in the travel industry. They capped the evening off with a reception to show gratitude and pay tribute to those who contributed to the success of ProColombia. They distributed awards during the reception. Award recipients appeared grateful, and the mood was festive throughout the evening. When the event was scheduled to end, attendees were hesitant to leave, and many stayed a little longer. IQ Inc congratulates ProColombia on 30 successful years.