Perspective: For the Sake of America, We Must Pass Immigration Reform Now 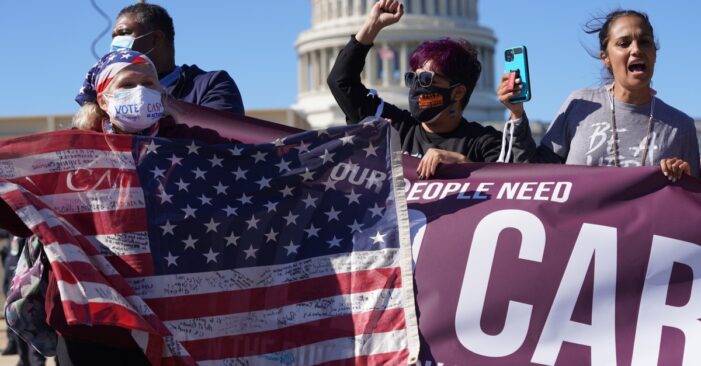 Protesters at the Capitol hold banners calling for immigration reform and a path to citizenship for undocumented immigrants. – Washington, DC – October 27, 2021 (Shutterstock)

In third grade, I (Gomez de Bybee) told my teacher at Jackson Elementary School I wanted to be the president of the United States when I grew up. I dreamed big and worked hard. I don’t recall when exactly it clicked that my dreams were impossible because of my immigration status.

Fearing the growing instability that would spur others to also flee, my family left Venezuela in 2001. Although coming to Utah 20 years ago meant abandoning their college studies and careers, my parents taught us that an education would be the key to success. I got straight As, joined the advanced learning program, and spent most summers at the library.

I was grateful to be chosen as the National Honor Society president and tried my best to push through a looming darkness during high school. I kept up the facade for a while, but inside I was crumbling. Without the promise of a future, my grades plummeted, and my academic dedication faltered.

The creation of DACA (Deferred Action for Childhood Arrivals) in 2012 came just in time to throw me a lifeline. I remember falling to my knees, giving thanks to the God that had watched over my family all those years, and calling my parents. DACA did not cover all of us, but we were grateful for the chance it gave me and one of my brothers.

Unfortunately, the despair I’d faced during high school had already done its damage — my perfect grades were ruined, I felt lost and alone, and I was removed as the National Honor Society president. I didn’t know how to tell my teachers the real reason behind why I had failed some classes. I had already been humiliated being asked to leave NHS. How would people look at me if they knew I was more than a failing student; that I was undocumented?

Although having DACA these past nine years has allowed me to work, drive, and attend college, it has not come without its downsides. Planning life in two-year increments has proved difficult amid ongoing litigation over DACA and growing hostility to undocumented immigrants, and to my family. Even while achieving a semblance of normalcy, I worry daily about my family and community who do not have DACA.

After all this time, one thing has become painfully clear: We all suffer when fear and injustice prevail. For the sake of us all, the vulnerable among us need a way to contribute to America and reach their full potential.

The DREAM Act: 20 years of heartbreaking failure
The first DREAM Act was proposed in 2001, the same year that the Gomez family arrived with hopes and dreams for their children. The core idea behind the DREAM Act — that undocumented immigrants brought to the United States as children should be allowed to stay and earn a path to citizenship — has enjoyed remarkably high levels of public support, ranging from 67% to 74%.

However, its history over the past 20 years is heartbreaking. Eleven versions have been proposed and none has become law, despite support from presidents of both parties. It passed one chamber on a bipartisan basis but not the other in 2001, 2006, 2010, 2013, 2019 and 2021. In 2021, the House vote was more bipartisan than in 2019 but the Senate filibuster has made it nearly impossible to clear the supermajority threshold of 60 votes.

Nearly 1.9 million immigrants eligible under the 2021 DREAM Act live in the U.S., making up roughly one-fifth of the total population of undocumented immigrants in the U.S. About 1 million of these Dreamers are eligible for DACA and fewer than 600,000 are current recipients, or 6% of all undocumented immigrants. Some may sincerely ask if granting temporary work authorization to this 6% has incentivized people to cross the border without authorization. The data are clear that this has not happened. About 80% of DACA recipients are Mexican and undocumented migration from Mexico essentially ended in 2008, with zero total net migration since 2005. The undocumented Mexican immigrant population continued to decline after DACA began in 2012 and has now fallen by two million.

After 20 years of failure despite bipartisan support, Congressional leaders are now using budget reconciliation, a process that requires a simple majority vote (51 in the Senate), to try to pass immigration reforms. Senators have attempted twice to include a path to citizenship for qualifying Dreamers, but the language has been ruled ineligible for reconciliation by the Senate parliamentarian.

Leaders have arrived at Plan C, the less ambitious, yet still historic immigration provisions of the reconciliation bill that passed the House just before Thanksgiving:

Utah provides a model in welcoming all immigrants
While Congress has failed these past 20 years, Utah has become one of the most immigrant-welcoming states in the nation. As Utah Gov. Spencer Cox recently emphasized, the state was settled by refugees fleeing persecution more than 170 years ago. These include poor pioneers with a paralyzed member from New England, ancestors of the other one of us born in Utah and raised in Chicago (Rugh). Utah’s roots run deep in a narrative of immigrants led by divine providence, including Gomez’s family and other Venezuelans, who are now the second-largest immigrant population in Utah. The state’s tradition lives on as it welcomes those from Somalia, the Democratic Republic of Congo, Syria, Iraq, Vietnam, the former Soviet Union, Burma and Afghanistan.

Utah’s tradition of welcoming immigrants owes partly to the supportive positions on immigration of The Church of Jesus Christ of Latter-day Saints. (Latter-day Saints make up 55% to 61% of Utah’s population and 86% of the Legislature.) The church’s principles of immigration reform enshrine the importance of keeping families such as the Gomezes together and overlap with the Utah Compact on immigration reform first adopted in 2010 and later reaffirmed in 2019 with widespread support from community, business, law enforcement and religious leaders.

With DACA in legal limbo, church leaders released an official church statement in 2018: “Specifically, we call upon our national leaders to create policies that provide hope and opportunities for those, sometimes referred to as ‘Dreamers,’ who grew up here from a young age and for whom this country is their home. They have built lives, pursued educational opportunities, and been employed for years.”

We highlight this statement’s support of all Dreamers, not only DACA recipients, and the call to “create policies that provide hope and opportunities.” This call to national leaders is now a call to the U.S. Senate. Although only the federal government can legislate permanent solutions, Utah’s shining example shows how policies to create opportunities for Dreamers benefit all of us.

In Utah, Dreamers and immigrants, regardless of status, may obtain in-state tuition (2002), driver’s privilege cards (2005), and reduced risk of automatic deportation (2019). Thanks to the courage of a Dreamer who graduated from Brigham Young University and two of our BYU colleagues, the Utah Supreme Court approved DACA recipients to practice law (2020).

At BYU and other campuses, Dreamers and DACA recipients are achieving the American dream of a college education. Nearly all are of Latin American descent, and their home is here. College attainment among young Latino adults ages 25-29 in the U.S. has soared, rising faster than that of any other racial/ethnic group; as of 2020, 1 in 4 young Latino adults hold a four-year bachelor’s degree, compared to just 1 in 10 in 2000 and 1 in 3 among all young adults.

Granting Utah’s Dreamers and fellow immigrants greater freedom has not imposed a burden. To the contrary, Utah is the fastest-growing state and its economic boom has led to the lowest unemployment rate ever recorded. Such benefits are not unique to Utah. Since 2005, GDP per person has increased by 60% in the eight states with three or more immigrant-welcoming policies mentioned above, versus 38% in other states.

As Utah has welcomed immigrants, it has also become more diverse and innovative. We live and work in Provo, which anchors a booming metropolitan area led by information technology (Silicon Slopes), higher education (BYU and UVU), and construction. Newcomers not only study and work in these sectors, they also worship, become homeowners, intermarry with U.S.-born residents, and raise families.

Utah’s Latino population numbers half a million, rising from 6% in 2000 to 15% in 2020. Provo is now 19% Latino, the same as in the U.S., and 83% of Provo Latinos are U.S. citizens. Since 2000, the nation’s Latino population has grown more due to births than immigration and 1 in 4 new Latina/o babies are mixed race Americans.

Undocumented immigrants in Utah, including DACA recipients, paid an estimated $129.5 million in federal taxes and $81.4 million in state and local taxes in 2018. Granting them and other essential immigrant workers protections would generate millions more in tax revenue to invest in the education and well-being of all Utahns.

The dream of undocumented and documented Dreamers who go to school, work hard, and pledge allegiance to the flag has become an American nightmare. This is not equal opportunity or the rule of law. It is a broken system. It is morally unacceptable.

Roberto Gonzales, author of the seminal book, “Lives in Limbo: Undocumented and Coming of Age in America,” has written, “For those waiting for immigration reform, time has been cruel and unyielding.” Today, Dreamers are not the only ones waiting. So, too, are their documented and U.S. citizen spouses, children, classmates and colleagues.

For aging DACA recipients and older Dreamers too old to qualify, the imperative for a permanent legislative solution becomes even more acute because most live in mixed-status families with U.S. citizens and documented persons, hit hard by the ongoing COVID-19 pandemic. While popular rhetoric portrays Dreamers as “kids,” the average age of DACA recipients is 27 and 1 in 3 Dreamers are at least 30 years old. As DACA recipients age into adulthood, many parents of U.S. citizen children, they join their forgotten older Dreamer siblings who are in their late 30s and early 40s.

If we fail Dreamers again, the time is upon us when we will let down and hold back the dreams of their U.S. citizen children and grandchildren. Their stories will be a testament to our broken promise to another generation of American families.

Since Dreamers are not allowed to vote, to be president, or to make the rules (just expected to follow them), then perhaps one day a Dreamer’s child will be president. Until then, we can no longer play political games with their lives and those of their families and communities, most of whom are documented residents or U.S. citizens.

The longer we tolerate failure, the more we suffer. But as Utah has shown the past 20 years, if we defy division to welcome all immigrants, we prosper together. For the sake of America, we must pass immigration reform now.