On Immigration, Senators Have the Last Word 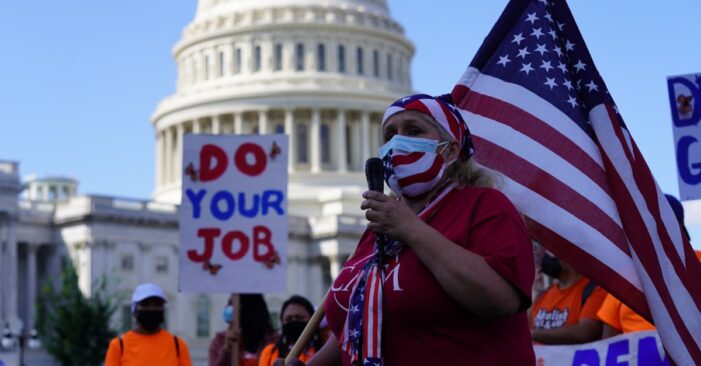 Protesters call upon Congress to do their job and pass pending legislation regarding the reconciliation bill pending before them. (Shutterstock)

Sometimes downtrodden, other times moderately hopeful, the much-delayed immigration reform has been, in contemporary U.S. history, an episode of highs and lows that, if it did not carry with it the lives of millions of human beings, would be nothing more than a minor, anecdotal blip in history.

But it turns out that over the last three decades, the promise of immigration reform has been the most concrete foothold for hundreds of thousands of working families who persist in believing that, even today, something good is just around the corner, something that will fully integrate them into this American social experiment for which they have literally sacrificed everything—from the abandonment of their countries of origin, to the impossibility of returning to see their loved ones over the course of decades. Sometimes even, they will never get to see—or embrace—them again.

That is why when new hopes for an immigration reprieve surge, as with the recent 220 to 213 vote in the House of Representatives to approve the Build Back Better (BBB) Plan, something changes in the immigrant’s psyche that keeps him from lowering his guard in this endeavor to be considered, finally, as subject to the full rights of their adopted country.

And although this piece of legislation only provides initial work permits and protection from deportation for 10 years, just the possibility of working without fear of being expelled from the country restores a moment of serenity. That, always with the intention of not forgetting that the original battle was and still is the migration regularization of more than 11 million undocumented people, so that they can subsequently obtain a path to citizenship.

Incomplete as it is in the interests of those millions of undocumented immigrants and their allies, the BBB’s approval has now moved on to the Senate, for both debate and a subsequent vote, in the middle of a cloud of speculations and discouraging scenarios—like the foolish posture of Democrats Joe Manchin (WV) and Kyrsten Sinema (AZ), as well as Senate aide Elizabeth McDonough. But that does not stop being a political impasse that gives rise to a new chance for hope.

There are complaints, of course. Especially toward the group that has promised the most, but also demonstrated its weakness, the Democrats, when it comes to making what was so hoped for, finally a reality. Also pointed to is the recalcitrant and hypocritical Republican block, which not only opposes any immigration benefit for political-ideological reasons, but has also been capable of exalting the most anti-immigrant and racist U.S. president in recent history for four years (2016-2020).

But beyond the mutual accusations, what should be prioritized is not who wins more applause from their respective followers, but who is capable of truly and viscerally understanding what it means to migrate in this 21st century, which promised to be an entirely different economic and political scenario, supported by technology, which supposedly would help to resolve many of the most pressing problems on the planet.

However, we have already seen this was wrong; that this century has been the paradoxical platform in which the distance between those who have everything and those who have nothing has been exacerbated; a century in which millions of human beings continue to be displaced all around the planet, searching for safety, while the fortune of the richest man in the world, disgustingly, becomes more important news; a century in which the formulas to end poverty collide with the perverse formulas to continue maintaining it, or making it even worse; a century, ultimately, in which a deadly virus has set the tone for the mobility or stagnation of societies worldwide.

It is not yet known whether the final will of the U.S. Senate will lean toward the historic posture of benefiting, even now, millions of undocumented immigrants who have demonstrated their labor, social, cultural, economic, historic, linguistic, fiscal, and political power—in spades. What is known is that while the Senate continues to be an obstacle for immigrants, and opposes their full inclusion in this country, anti-immigrant forces will continue to rearrange and fortify themselves, with the only goal of demonizing, insulting, and attacking a phenomenon like the migratory one that they don’t feel like studying or understanding, but from which they also are and have been sprung—accept it or not.

And that, to summarize, could become the preamble of another barbarism against democracy, which worked so well for the most anti-immigrant sector of the United States.

immigrants in the U.S., immigration