NY’s Excluded Workers Fund is Almost Out of Money 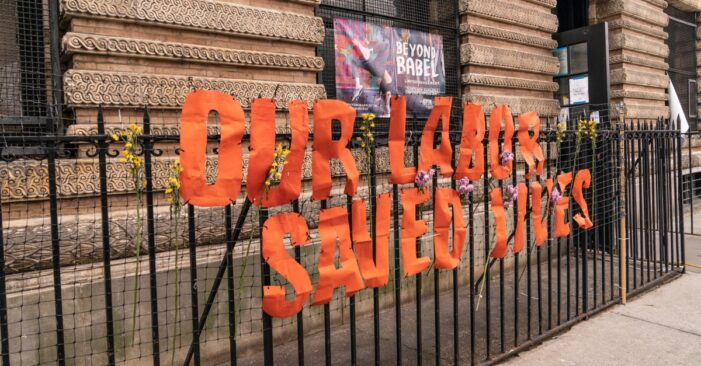 The rally was organized by the EWF coalition, which is comprised of more than 100 community organizations that have advocated for the funds since before it was passed. “We are not one, we are millions,” was a phrase chanted by the seas of attendees who wore yellow, orange, green and red shirts that represented the organizations they belong to.

The EWF is a historic $2.1 billion dollar fund that was passed in early April, after a 23-day hunger strike and a year-long fight for economic support for communities that were excluded from the state programs. The fund served as an alternative to unemployment benefits, and it would award eligible New York workers, who lost 50% of their income or more during the pandemic, a one time grant of up to $15,600 excluding taxes for Tier 1, and $3,200 for Tier 2.

Applicants started to receive approvals three weeks after the fund opened on August 1. On September 3, Gov. Hochul announced that 90,000 applicants had already been approved for the program, and that $850,000 had already been allocated for distribution. The data also showed that 99.7% of approved claims were for Tier 1.

The news was welcomed by community advocates, who saw the swift approval process as a win for groups that were deeply affected by the pandemic. As more people submitted their Excluded Workers Fund applications, however, the fear of the program running out of funds took over the minds of those who were waiting for a decision or did not have the possibility to apply sooner.

As of date of publication more than 114, 247 applications have been approved out of 328,683 — with more than $1.35 billion out of the $2.1 billion dollars already distributed or scheduled for distribution. On September 24th, the EWF portal updated its banner to say that “The DOL cannot guarantee that funds will be available for any claims submitted after 9/24.” On October 5th, 86,000 applications had been submitted after September 24.

“The initial request was $3.5 billion, we knew that that was how much we needed to make sure that this was a fund to help every single New Yorker, or most New Yorkers. However, we only got $2.1 billion — which I am extremely grateful for, we fought really really hard for — but we knew that wasn’t going to be enough,” Assemblymember Jessica González-Rojas (AD-34) told Documented at the event.

The fight is not over

Documented received multiple messages from our WhatsApp readers who were concerned about the lengthy process for Excluded Workers Fund applications, which sometimes lasted more than a month. At the event, Julia Rojas, 43, an immigrant from Mexico who has lived in the states for 17 years, also mentioned that she had applied for the funds a month ago. “I had all the documents. I had to request it three times. The first time something happened, the second time my documents were sent back, and the third time I was finally able to get it.”

After losing two jobs, as a sales person at a shoe store, and her gig as a house cleaner, she had to move into a smaller room because she could not afford paying rent for her former apartment. “I felt like being in jail. I could not go out and see my family because of the virus,” she told Documented.

When she received the notice that she got approved, “I felt like jumping,” she said. “I had to apply three times, if I had stopped in the middle they would have denied me. There were times that I wanted to give up. But I am a person that when I want something, I fight for it.” With the money she received from the grant she plans to move into a new apartment, where she will have more space to invite her children who are living with their father, because her room during the pandemic was too small.

“Most of the cases have a very hard time collecting these documents,” said Jessemia Guapisaca, Constituent Services Specialist at Churches United for Fair Housing. “Some of the people, because of how crowded New York City is, are often renting one small room in an apartment, so therefore they are not having bills under their name,” Guapisaca added.

Identification and proof of address were some of the obstacles that impeded immigrant New Yorkers from submitting their Excluded Workers Fund applications. Documented reported in May about ITIN backlogs and lack of appointments for IDNYC, an ID which could fulfill the proof of identity category. A month later, in an investigation, Documented discovered that Latin American consulates were also facing delays of up to eight months for renewing or getting new passports — another document that was essential to prove the identity category in the claim.

“Governor Hochul and state lawmakers need to take immediate steps to put more money into the Excluded Workers Fund so that every worker who is eligible can access this funding. The need for more funding is clear. It’s time for our state electeds to respond,” said Angeles Solis, Lead Organizer at Make the Road New York, in a press release.

In the meantime, while the money of the fund is running out and until they get to a new budget session, Gonzaléz-Rojas recommends people to keep applying. “With the wins of both the Excluded Wokers Fund and the FEMA funds for undocumented people, we have to keep fighting for something more permanent because our community is not going anywhere and they are New Yorkers. We need to support them.”