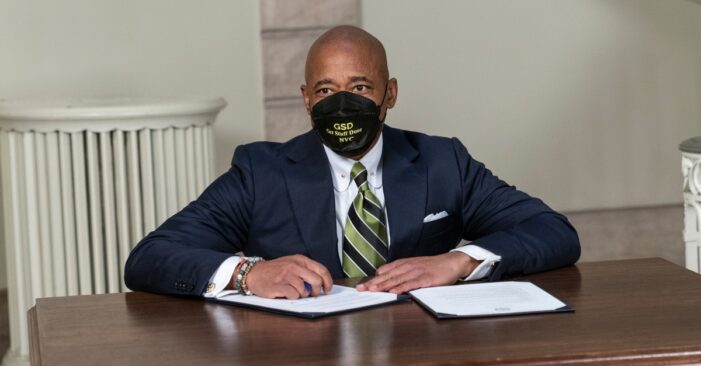 The launch of NYC Youth Speaks features a youth version of a citywide survey that is currently being distributed throughout the five boroughs and online to inform the policies and priorities of the new mayoral administration. This survey has been adapted for students from grades 9 through 12 by students and can be found at nycspeaks.org/youth. In addition, the New York City Department of Education (NYCDOE) is introducing the NYC Youth Speaks toolkit for public high school students, which will engage young people in the classroom about civic action, city government, and ways to make a change.

“The NYC Youth Speaks initiative provides a direct pipeline to the city’s youth to hear their hopes and concerns for the future of our city. We have developed an innovative toolkit that will bring the necessity of civic engagement directly into our classroom, and I am hopeful that this can be the spark for valuable change not only during my administration but for years to come. I encourage all New Yorkers of every age to take part in this initiative and bring their voice to the table,” said Mayor Eric Adams.

“NYC Youth Speaks gives young people a way to shape our city’s priorities, and the Department of Education is thrilled to be an official partner in this effort. This youth survey brings the voices of our students to the front of the conversation, not only in regards to education but a variety of issues that affect them in their homes and their neighborhoods. I encourage all students to participate in this survey, speak up in their classroom, encourage their parents to participate, and add their voices to this important conversation about the future of New York City,” said Schools Chancellor David C. Banks.

“Our young people are the future of this city, and the earlier we engage youth in the civic process the more vibrant that future will be. The excitement around the NYC Speaks initiative is palpable, and now we have an opportunity to bring the youth of this city directly into the conversation, right in their own classroom, thanks to this partnership with the Department of Education. As we reimagine the role the community plays in governing our city we will ensure that the youth voice is heard loud and clear,” said Deputy Mayor for Strategic Initiatives Sheena Wright.

Earlier this month, NYC Speaks announced the launch of a citywide survey to inform the policies and priorities of the new mayoral administration. Like the Youth survey, it asks New Yorkers about a variety of topics such as Health & Well-being, Housing & Neighborhoods, Economy & Workforce, Racial Equity, Gender Justice, Climate & Infrastructure, Education & Youth Development, Public Safety, Arts & Culture, and Civic Engagement.

That survey can be taken at nycspeaks.org, and its deadline has been extended to February 11, 2022. The survey is available in 11 languages including English, Spanish, Chinese, Russian, Bengali, Haitian Creole, Korean, Arabic, Urdu, French, and Polish.

Since the NYC Speaks survey was launched, participation has been robust, and respondents are representative of New York City as a whole. In addition to online participation, in-person canvassers working in the City’s Taskforce on Racial Inclusion and Equity’s 33 priority neighborhoods have helped to ensure that NYC Speaks is reaching a diverse, representative selection of New Yorkers. For example, nearly a third of respondents so far are Black and 17 percent of respondents are Asian, trending in line with the respective shares of the population overall.

Our efforts with Community Based Organizations and partnership with the City of New York has paid off, which is evident through the 30K-plus responses we have already received through the survey. We will continue to promote inclusive participation through close coordination with City agencies, including: New York City’s Housing Authority (NYCHA), Mayor’s Office of Operations, Department of Youth and Community Development, Civic Engagement Commission, Community Affairs Unit, DemocracyNYC, Public Engagement Unit, Department of Cultural Affairs, Department of Veteran Services, and Department of Probation.

Both the adult and youth surveys will remain open until February 11th. Extending the NYC Speaks survey for two additional weeks will provide more New Yorkers whose voices are too little heard in government an opportunity to be heard. Survey data will be used to shape Community Conversation events that will add qualitative insights, including events led by students for students. The survey data is anonymous and will be compiled into a report, which will be delivered to Mayor Adams, Chancellor Banks, and the administration and made available to the public.

“We are excited to have forged this partnership with the NYCDOE,” said Dr. Shango Blake, Co-Executive Director of NYC Speaks. “As an educator, I understand that including the perspectives and input of young New Yorkers on how the government can best serve them is critically important. In addition, by participating in this process it affords students the opportunity to participate in Civics, which is in fact experiential learning. What better way to reach our young people than leveraging the NYCDOE as a partner in the process.”

“The outpouring of support from Mayor Adams, his administration and so many city agencies since we’ve launched this important initiative has been encouraging, and we are grateful and humbled by their support,” said José Serrano-McClain, Co-Executive Director of NYC Speaks and Partner at HR&A Advisors. “This partnership with the Department of Education will offer our city’s young people a chance to weigh in on the issues that concern them and bring that conversation to their classmates. Through both our survey and new curriculum we will encourage youth participation in our city’s civic life, activate them on the issues they care about and develop the roots for a stronger New York.”

NYC Speaks is an independent initiative funded by the Goodnation Foundation, an IRC 501(c)(3) organization, and managed by HR&A Advisors, a mission-driven, employee-owned urban planning and economic development consulting firm based in NYC. NYC Speaks will partner with a robust network of civic and community-based organizations to co-lead this process. The initiative is also convening philanthropic institutions such as the Ford Foundation, Robin Hood Foundation, Galaxy Gives, Carnegie Corporation of New York, Trinity Church Wall Street Philanthropies, FWD.us, and the New York Women’s Foundation.