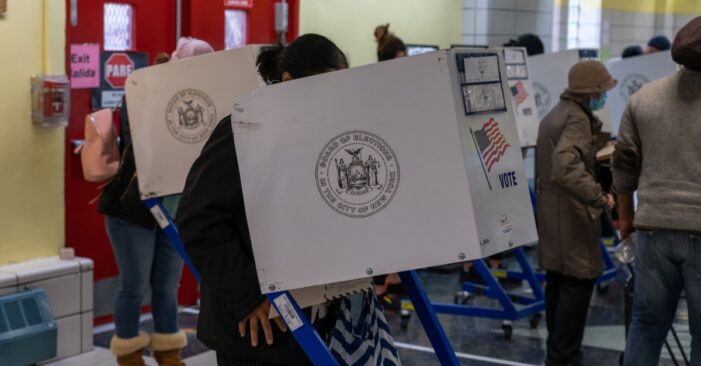 People cast their vote for the 2020 U.S Presidential Election at a polling site in Manhattan on November 3, 2020 in New York City. (Shutterstock)

New York City will become the largest municipality in the nation to permit noncitizens to vote in local elections, after the New York City Council passed legislation on Thursday granting voting rights to an estimated 800,000 noncitizen New Yorkers.

The legislation passed the 51-member city council with 33 members voting yes, 14 voting no, and 2 members abstaining from the vote.

“It is no secret that today, inside these chambers, the New York City Council is making history,” said Councilmember Ydanis Rodriguez, a Democrat and a prime sponsor of the legislation, as he cast his “yes” vote on the bill.

“Many other cities across the nation as well as abroad are watching this meeting today. In one of the most diverse cities in the world, we need to ensure that there is adequate representation for all New Yorkers.”

The bill, Intro. 1867, has a veto proof majority — meaning that even if the mayor were to veto the bill, the supermajority would override that decision.

At a joyous gathering and press conference outside of City Hall hours before the vote took place, about 60 immigration advocates came together to express their support for the legislation. They chanted “si se puede” [yes we can] in Spanish, held signs that said “Immigrants are Taxpayers,” and put their fists up in solidarity with each other and immigrants across New York.

Various city leaders called Thursday a consequential day, and suggested that New York would become an example for cities across the country to push for immigrants to be included in local voting processes.

“New York City is showing another way to do business,” said Rodriguez, who represents District 10 in Upper Manhattan, including the neighborhoods of Washington Heights, Inwood and Marble Hill. “Today, we are giving dignity and respect to working-class people,” he said in Spanish outside of City Hall before the stated meeting.

The bill will extend local voting rights to green card holders and people with work authorization, who have been living in New York City for at least 30 days, though these individuals still would not be able to vote in state or federal elections.

They will be granted the ability to vote in municipal elections, so they will be able to participate in the election process for the offices of mayor, comptroller, public advocate, city council members and borough president. Municipal elections “include all primary, special, general and run-off elections for such offices, and all municipal ballot measures,” according to the text of the legislation.

In the stated meeting on Thursday, an animated debate about the bill took place in the Council Chambers. Opponents of the bill questioned its legality and expressed concerns about whether it might violate the New York State constitution, though advocates said on Thursday that it was safe to push forward, noting that legal staff from the New York City Council had vetted various questions that had come up related to the legality of the bill.

Other adversaries of the legislation also voiced that 30 days was not enough required time for individuals to live in New York City before being allowed to vote. Before the vote, Councilmember Mark Gjonaj, who represents District 13 in the Bronx, submitted a motion to recommit the bill to the Committee on Governmental Operations at the stated meeting on Thursday.

This would have referred the bill back to the Committee on Governmental Operations and would have made it essentially impossible to pass the bill during the current term, Councilmember Stephen Levin representing District 33 in Brooklyn said, though the legislation had already passed in the committee on Wednesday as it was.

But ultimately, the motion did not pass with 35 council members voting against on the motion, and 14 voting for it.

The “Our City, Our Vote” legislation gained a super majority earlier this year, as the City’s immigrants were lauded as essential, yet excluded, workers helping New York through the pandemic crisis. Essential workers were centered on Thursday as activists recounted how immigrants worked outside of the home at the height of the pandemic, when many others had the option to stay home.

“Half of all essential workers are immigrants. They are grocery, pharmacy workers, healthcare workers, building cleaners,” said Murad Awawdeh, the executive director of the New York Immigration Coalition, an organization that represents more than 200 immigrant and refugee rights groups in New York State. Immigrants, Awawdeh said, were “all the people who kept this city moving when the days were long, dark and heavy.”

Sarai‌ ‌Rodriguez‌, a street vendor and small business owner from the Mexican state of Puebla, said Tuesday that she has been in the United States for 20 years, and was looking forward to finally being counted in local elections. Rodriguez, who lives in Queens and has four children, came to the country with “many dreams and hopes,” she said in Spanish.

“We are here, we are immigrants, and we have the right to vote,” she said. “We are fighting,” Rodriguez said, “so that our vote can be counted.”

The idea of allowing lawful permanent residents to vote is not a new one. At least ten municipalities currently allow non-citizens to vote, though none on a scale as massive as New York. Non-citizens in New York City were previously able to vote in school board elections between 1968 and the early 2000s, when school boards were considered outside local government, according to a report from The City College of New York’s Colin Powell School for Civic and Global Leadership.

Mayor de Blasio has said that he was not intending to veto the bill, though the bill’s support currently constitutes a veto-proof majority regardless. But the mayor has previously expressed skepticism about the legislation various times. At a press conference on November 23, de Blasio said he had “reservations” about the bill, and was “concerned” about its legality.

“So, we’ll look at the legislation, respect the Council, this is something that councils decided to do, it’s a democracy,” de Blasio said. “It’s also something I’m not sure is the right way to go about this.”

Mayor de Blasio also said in a Nov. 29th interview with NY1 that he had hesitations about the legislation because he wants to make sure that citizenship “is valued and is given its full weight.”

Still, the New York Immigration Coalition expects that de Blasio will not veto the bill, based on his public comments, and that “he will take the actions necessary to ensure the bill becomes law,” said Rush Perez, the spokesman for the coalition.

At the press conference before the vote, Pierina Ana Sanchez, a Council Member-Elect for District 14, thanked Mayor dee Blasio for having his team “negotiate in good faith” on the legislation.

Mayor-elect Eric Adams, on the other hand, has been a staunch supporter of the bill. In a democracy, Adams said in testimony previously submitted for a city council meeting about the bill, “nothing is more fundamental than the right to vote and to have a say in who represents you and your community in elected office.”

On Thursday, those who would be directly affected by the legislation, including DACA recipients and legal permanent residents, also came to speak to the public in front of City Hall.

Melissa John, a public school teacher and green card holder born in Trinidad who has been in the United States for about 20 years, has never once voted in New York, the city she calls home, she said. But she was heartened, she said, knowing this would soon change.

Abdoulaye‌ ‌Cisse‌, a green card holder who is an advocate for the Council on American-Islamic Relations in New York, said that he has been in the United States since he was 6 years old. His family has long teased him for being the “American boy,” he said.

‌Cisse‌, who worked as a contact tracer during some of the worst moments of the pandemic, said that there was one special moment that he looked forward to in the next local election — which would be his first.

“No longer will I be on the sidelines when I take my wife to the voting booth,” ‌Cisse‌ said.