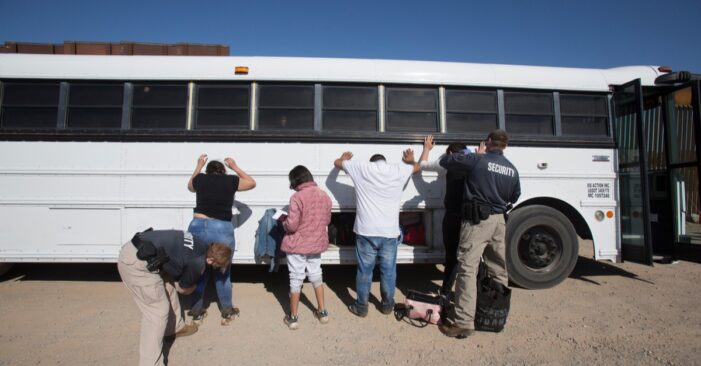 Law enforcement check and search migrants from Colombia after turning themselves over to authorities at the United States and Mexico border May 12, 2021 in Yuma, Arizona. (Shutterstock)

When the Biden administration announced a new “dedicated docket” in immigration court for families seeking asylum at the border, many advocates raised concerns that the docket would forgo due process for efficiency’s sake. This was the case for the “rocket dockets” that existed under President Obama, which suffered from lack of access to counsel and frequent bureaucratic errors.

A new report from the non-partisan Transactional Records Access Clearinghouse (TRAC) reveals that some of those concerns are being borne out.

The TRAC report found that 92% of cases completed in the first seven months of the program resulted in an immigrant being issued an order of removal. In nearly all those cases, the immigrant did not have a lawyer. In total, just 16% of people put onto the Dedicated Docket since May have told the court they have a lawyer.

Those whose cases have been pending the longest are most likely to have obtained lawyers. 46% of people with cases pending longer than six months secured a lawyer. This is to be expected, as many people take months to obtain a lawyer.

Out of the 1,687 Dedicated Docket cases completed since May, just 13 people were granted any form of relief, as many cases have not reached the final hearing stage yet.

Concerns about bureaucratic errors were also validated by the data. When asylum seekers are released at the border with a court date, that court date is generated by a U.S. Customs and Border Patrol officer using the immigration court system’s “Interactive Scheduling System.” But after that date is generated, U.S. Immigration and Customs Enforcement (ICE) still needs to formally file removal charges against the immigrant for the court case to begin.

TRAC found that in 10% of all Dedicated Docket cases, an immigration judge terminated the case because ICE failed to file that paperwork with the court before the hearing was scheduled. In total, over 7,000 cases were terminated for “failure to prosecute.”

ICE’s failure to file the right paperwork can leave asylum seekers in limbo, waiting for ICE to file new charges against them to restart the case. In many cases, people will fall through the cracks and may find themselves entirely undocumented through no fault of their own.

TRAC’s data also reveals the disproportionate effect of Title 42 at the border. In previous years, most new asylum cases were for individuals from Honduras, Guatemala, and El Salvador. But under Title 42, most nationals of those three countries are rapidly expelled back to Mexico, while other nationalities which can’t be expelled to Mexico are more likely to be admitted and allowed to seek asylum.

As a result of this discrepancy in border processing, nationals of Brazil, Ecuador, Nicaragua, Venezuela, Haiti, Cuba, and Colombia make up 71% of all Dedicated Docket cases. Nationals of Guatemala, Honduras, and El Salvador make up just 22% of cases.

The TRAC report makes clear that concerns about expedited dockets remain. As the Biden administration expands the use of this docket across the country and sends thousands of asylum seekers into the system, it must ensure that all asylum seekers have access to counsel and are not unable to pursue their case due to bureaucratic error.