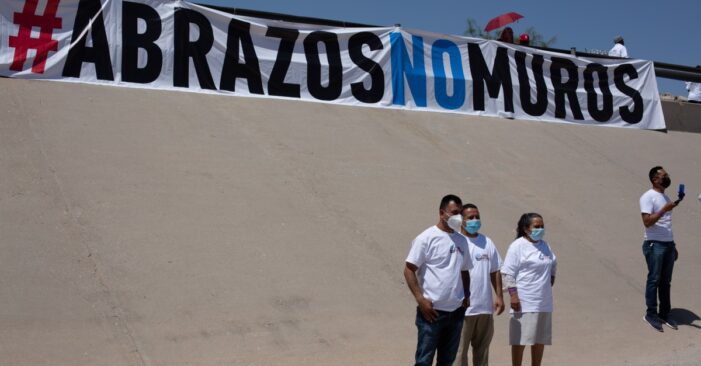 Families separated by immigration policies are allowed to embrace in the middle of the river, the national border between Mexico and the United States. (Shutterstock)

MEXICO CITY — A migrant caravan, composed of thousands of immigrants from Central and South America, continues its journey on foot through Mexico in the hopes of reaching the U.S., despite the clashes that have arisen with the Mexican National Guard — which resulted in the death of one migrant — and the various injuries and illnesses that some have suffered along the way.

The caravan, named Caravan for Justice, Dignity and Freedom of the Migrant People, finds itself as of Friday still traveling along the roads of Chiapas, Mexico. The group of immigrants started their trek on Oct. 23 in Tapachula, Chiapas. Its purpose is to first reach Mexico City and then travel throughout the Mexican territory until reaching the United States border where they will formally apply for refugee and asylum status.

The group is made up of at least 1,200 people of mainly Central American origin, according to data provided by the Mexican government. But there are also Venezuelans, Haitians and Cubans in the group. However, according to data from the Centro de Dignificación Humana A.C. (CDH), one of the organizations leading the caravan, about 4,000 migrants comprise the group — most of them women and children.

On Thursday, several members of the caravan clashed with soldiers of the Mexican National Guard. The incident took place on the Pijijiapan-Tonalá highway in Chiapas. At least four guards were injured and 30 migrants were arrested.

According to the version held by the activist Luis Rey García Villagrán, CDH coordinator, the confrontation occurred after several migrants that wandered off by themselves were detained by soldiers.

According to García Villagrán, the migrants were stopped because soldiers did not want them to travel on their own. The Guard, he countered, should only watch over the migrants’ journey, not limit it.

Just last weekend, a Cuban migrant that was traveling with the caravan died after being shot. The details of the event have yet to be disclosed by Mexican authorities.

“The State Attorney General’s Office (FGE) … opened an investigation into the crime of qualified homicide, against those responsible for the death of a male originally from the Republic of Cuba, who was found dead in the municipality of Pijijiapan,” the FGE said in a statement.

Ireneo Mujica Arzate, one of the caravan leaders and director of the organization Pueblos Sin Fronteras and Pueblo Unidos Migrantes, accused the Mexican government of mistreating and provoking migrants in order to bring about these violent acts and disband the caravan.

Mujica Arzate said that their only wish is to trek in peace and safely arrive at their destination.

“They have tried by all means to stop the caravan. Through their strategy what they really wanted was a provocation to silence their own conscience and be able to say ‘it was good that they killed the migrants’ … ‘It was good that the migrants were terrorized, because they are bad,” Mujica Arzate said in an interview with La Voz/The Arizona Republic. “But no, it was not us migrants who brought weapons. We are peaceful people,” he said.

Faced with what he considers an attack on the human rights of migrants, Mujica Arzate said that the migrants who advance through Mexico are not criminals and will not respond to violence.

“I tell you, we come in peace and we will continue to advance in peace. Criminalizing women and children will be difficult for (the Mexico government). What little morality of a government that does not respect the weakest,” he said.

No agreement between authorities and caravan leaders
Despite the confrontations, the INM reaffirmed its commitment to a safe and orderly migration, respecting the rights of these migrants as they make their way through Mexican territory.

The INM has offered migrants of this caravan Visiting Cards for Humanitarian Reasons, mainly to pregnant women and minors, which would be given to them under the supervision of the National Human Rights Commission. This document would provide them with support for accommodation in shelters.

Members have not accepted these, however. According to caravan leaders, most of the migrants do not want to be registered and don’t wish to give their personal information to Mexican authorities.

Among members of the caravan, there are also representatives from the Chiapas State Human Rights Commission, doctors with Doctors Without Borders, Fray Matías de Córdova A.C. Human Rights Center, Doctors of the World France as well as members of Save the Children.

The Mexican government has provided medical attention to migrants with health problems and physical injuries. And although dozens of people have already been treated — with lacerations on their feet, dengue fever and dehydration due to high temperatures — in most cases, hospitalization for better care has been rejected.

Additionally, at least 60 pregnant women are traveling in the caravan. One gave birth on Nov. 3 to a boy.

The authorities’ meetings have been with the leaders of the caravan Mujica Arzate and García Villagrán, but a definitive agreement has not been reached, the Ministry of the Interior said in a statement.

“It is irresponsible that due to the decisions of two people, self-proclaimed leaders of the caravan, an agreement is not reached for the authority to provide foreigners with regular immigration status, food and accommodation. Which has as a consequence the detriment of physical integrity due to being exposed to various risks,” the Ministry said in a statement.

Migrant caravans
On Oct. 12, 2018, around 1,000 people, driven by poverty and violence in Honduras, began a caravan trip in order to reach the United States through Mexico.

During their journey, migrants from El Salvador and Guatemala joined. Different organizations that support and defend human rights accompanied them.

Since that year, there have been various caravans that depart from different cities in Central America and then from the southern border of Mexico. They are carried out in such a way because as a group the migrants seek to be protected by institutions and different non-governmental organizations against organized crime that assaults them or recruits them along the way.

Several Republican leaders have started calling on the Biden administration, specifically Secretary Alejandro Mayorkas of the Department of Homeland Security, to “make a plan for dealing” with the migrants once they reach the border.

Rep. Elise Stefanik of New York is leading that charge, saying that the Biden administration is “INCENTIVIZING mass caravans mass to head to our southern border,” she wrote on Twitter.

Weeks before this latest mass flow of migrants to the southern U.S. border, thousands of immigrants, mainly Haitians, were rounded up in Texas by border agents on horseback.