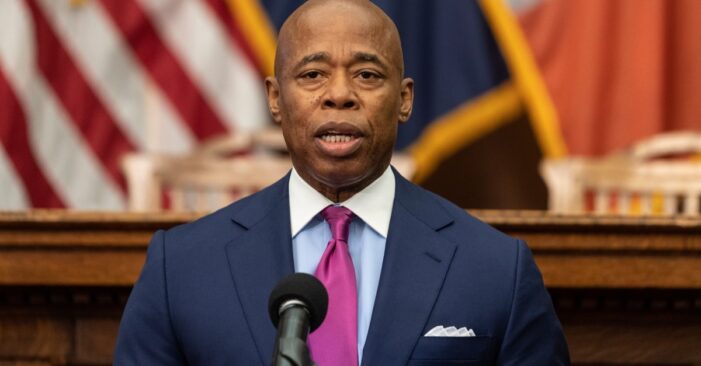 Today, Mayor-elect Adams announced a suite of appointments to fill out his administration as he prepares to take office on January 1st, including commissioner of the Mayor’s Office of Immigrant Affairs (MOIA); president and CEO of NYC & Company; commissioner of the New York City Department of Small Business Services (SBS), as well as president and CEO of the New York City School Construction Authority (SCA). Mayor-elect Adams highlighted the depth and breadth of public service experience among all the appointees, and their commitment to delivering on his vision for a safer, more equitable, and more prosperous city for all New Yorkers.

“We are building a team that looks like New York City, cares about New York City, and understands the needs of New York City’s diverse communities. These fine public servants embody the best our city has to offer – and I look forward to working with them to create a city that works for all New Yorkers. Our administration is charting a course for a truly equitable recovery that uplifts all of us, from building top-flight schools and empowering our immigrant neighbors to reviving our tourism sector and supporting our small businesses. We are fully prepared to hit the ground running on January 1st,” said Mayor-elect Adams.

Manny Castro will serve as the Commissioner of the Mayor’s Office of Immigrant Affairs (MOIA). He is the first Mexican-American to serve in this role. As commissioner, Castro will be responsible for fulfilling the Mayor-elect’s vision of uplifting all immigrant communities across the five boroughs, as outlined in his WeRISE Plan. As a DREAMer and formerly undocumented immigrant, he will draw on his life experience and background as an activist to ensure all immigrant communities have equitable access to City services. Castro will report to Deputy Mayor for Health and Human Services Anne Williams-Isom.

“It is an incredible honor for me to have Manny Castro join my team as Commissioner of the Mayor’s Office of Immigrant Affairs. This administration is about making history and today we do it once more by having a Dreamer lead an office that is critical to thousands of immigrant New Yorkers that call this city home. Manny has advocated in the halls of our most important institutions. He has led the fight for groundbreaking life changing legislation and as Commissioner he will bring that energy, discipline and commitment to the halls of city hall as, together we begin the recovery for all New Yorkers but especially those hardest hit by this pandemic. I welcome Commissioner Castro to our team and we are ready to get to work,” said incoming Deputy Mayor for Health and Human Services Anne Williams-Isom.

“As a leader of a grassroots community organization and a formerly undocumented New Yorker and DREAMer, I am deeply humbled to be appointed by Mayor-elect Eric Adams as the incoming commissioner of the Mayor’s Office of Immigrant Affairs (MOIA). I’m truly honored and stand ready to serve our New York City in this role. I will work tirelessly to ensure that all immigrant communities have the opportunity to recover from this pandemic and are able to access the services they need to thrive in our City. I look forward to working with Mayor Adams, Deputy Major Anne Williams-Isom, everyone in the new Administration, and the wonderful team at MOIA,” said incoming MOIA Commissioner Manny Castro.

Fred Dixon has been reappointed as president and CEO of NYC & Company; he was first appointed in 2014. NYC & Company is the City’s official tourism marketing organization, promoting New York City as a global travel destination. As president and CEO, Dixon will be charged with aiding the recovery of the City’s tourism sector, which was hit hard by the COVID-19 pandemic. Dixon will report to Deputy Mayor for Economic and Workforce Development Maria-Torres Springer.

Kevin Kim will serve as the commissioner of SBS, the first Korean-American to hold the role. He is currently a partner at Yoon LLP, where he specializes in New York State liquor license law. As commissioner, Kim will play an integral role in facilitating the City’s economic recovery by helping small businesses get back on their feet; reducing red tape and encouraging collaboration between City government and small businesses throughout the city. Kim will report to Deputy Mayor for Economic and Workforce Development Maria-Torres Springer.

“With the tourism industry and the city’s small business community still reeling from the effects of the pandemic, I could not be prouder that we have two transformational leaders in Fred Dixon and Kevin Kim to lead NYC & Company and SBS, respectively. They have the skills, experience, and unwavering love of New York City that are necessary to ensure we reopen our doors to the world, jumpstart small businesses, and thereby accelerate our economic recovery across the five boroughs,” said incoming Deputy Mayor for Economic and Workforce Development Maria Torres-Springer.

“I am honored and grateful that our new mayor has asked me to continue to serve as president and CEO of NYC & Company. I look forward to working with Mayor Adams and his administration as well as the NYC & Company Board of Directors to accelerate New York City’s tourism recovery, fueling the return of the jobs and spending that come with it. The tourism and hospitality industries are vital economic engines for the city, impacting businesses big and small across all five boroughs,” said NYC & Company President and CEO Fred Dixon.

“I am excited and honored for Mayor-elect Adams’ appointment to lead SBS. As the son of immigrants who were also small business owners in the Garment District, this appointment has brought me full circle at a critical juncture for our great City. Over 200,000 small businesses in NYC form the backbone of our economy, and together, they employ over three million New Yorkers. The Adams administration is fully committed to deploying all its resources to ensure that small businesses, especially M/WBE and immigrant-owned businesses, emerge stronger than ever out of the pandemic. I look forward to bringing my own relevant experience as a small business owner to help other businesses successfully start, operate, and thrive in NYC,” said incoming SBS Commissioner Kevin Kim.

Nina Kubota has been reappointed as president and CEO of the School Construction Authority. She was first appointed in April 2021, and is the first Japanese-American woman to serve in the role. Kubota will oversee new school construction, with a focus on reducing overcrowding in classrooms and providing state-of-the-art learning environments for students throughout the five boroughs, particularly in underserved neighborhoods. Kubota will report to Deputy Mayor for Operations Meera Joshi.

“We are thrilled to be able to bring Nina Kubota’s expertise and empathy to the Adams Administration,” said incoming Deputy Mayor for Operations Meera Joshi. “Under her leadership our City’s students can rest assured that the physical foundation of their education is solid.”

“I have been working to serve our school communities at the SCA for more than two decades, and I am honored and grateful to have the opportunity to continue to lead the incredible team at the SCA as we continue to address pockets of overcrowding around the city and work to modernize our existing school buildings,” said SCA President and CEO Nina Kubota. “I thank Mayor-elect Adams for the privilege to continue to serve our City, and I look forward to working together with Deputy Mayor Meera Joshi and the entire Adams Administration to provide our school children with the modern learning environments they need to learn and grow.”

(NICE), a Queens-based nonprofit organization with over 15,000 registered members working to create a society where immigrants can live and work with dignity, justice, and respect.

Prior to joining NICE, Castro led federal and state advocacy campaigns for the New York Immigration Coalition (NYIC), the largest and most diverse statewide immigrant coalition in the country. He earned a Bachelor of Arts (BA) in Urban Anthropology from Hampshire College and a Master of Public Administration (MPA) from the School of Public Affairs at Baruch College, City University of New York (CUNY).

About Fred Dixon
Fred Dixon serves as the president and CEO of NYC & Company, the City’s official tourism marketing organization. He was first appointed to the role in 2014. With more than 23 years of experience in the travel industry, Dixon has been instrumental in building New York City’s reputation as a global tourist destination. He began his career with NYC & Company in 2005.

About Kevin Kim
Kevin Kim is a partner at Yoon LLP, where he specializes in New York State liquor license law. Prior to joining Yoon LLP, he served as a Commissioner of the New York State Liquor Authority (2014-16) becoming the first Asian-American appointed to this position.

About Nina Kubota
Nina Kubota serves as president and CEO of SCA. She was appointed in April 2021. Kubota has served in a variety of roles at SCA since 1998. Prior to serving as SCA’s senior vice president for Capital Plan Development & Implementation, Kubota served as Vice President of Capital Plan Management from 2013 to 2020. She has also worked in various roles at SCA’s Architecture and Engineering Department and its Administrative Services Division. She is a graduate of Queens College and Baruch College.