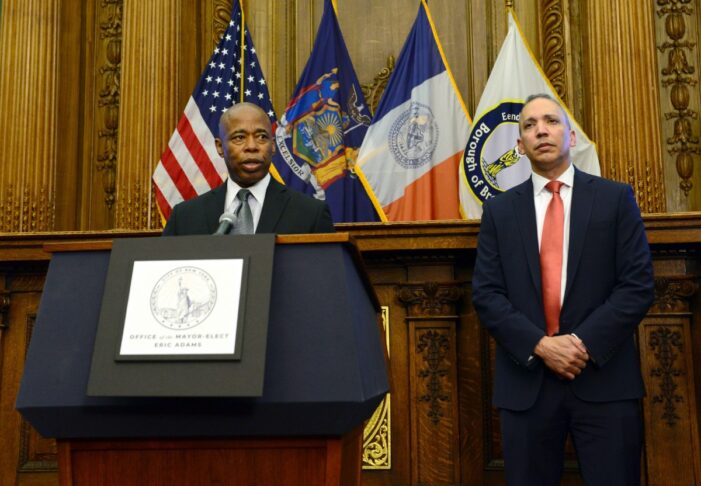 Today, Mayor-elect Adams appointed Chief Louis L. Molina as the next Commissioner of the New York City Department of Corrections. Chief Molina will be the first Latino to lead the department in its 126-year history.

A Bronx native who currently serves as Chief of the Las Vegas Department of Public Safety, brings 20 years of law enforcement experience to the role. After serving for four years in the United States Marines, he began his law enforcement career in the New York City Police Department, spending 13 years protecting the people of New York City. ​​Molina has prior experience in the New York City Department of Corrections, having served as chief internal monitor and acting assistant commissioner for the department’s compliance unit.

He also served as First Deputy Commissioner of the Westchester County Department of Corrections, where he was credited with implementing significant reforms to the troubled Valhalla Jail facility. His career has spanned the three main pillars of the criminal justice system – law enforcement, prosecution, and corrections – which gives him unique insight into how to balance the twin imperatives of public safety and reform in the City’s jails and prisons.

“I am pleased to announce the appointment of Chief Molina as the next Commissioner of the Department of Corrections. ​​We are at a pivotal moment right now, as our City’s jails and prisons have been grappling with several crises simultaneously, from the ongoing ravages of COVID-19 to the epidemic of violence against inmates and correction officers. These crises are most acute on Rikers Island, which has long been a stain on our city. I will work closely with Commissioner Molina to immediately improve conditions for inmates, provide real support to our correction officers, and work toward a long-term transformation of our criminal justice system toward holistic rehabilitation. I thank Chief Molina for taking on this assignment, and know that he will be up to the challenge,” said Mayor-Elect Adams.

“I am humbled by this opportunity to lead New York’s Boldest. As Department of Corrections Commissioner, I will work tirelessly to deliver Mayor-elect Adams’ vision for a safer, more humane criminal justice system. For too long, we have managed our public safety approach with slogans and not science. And our strategies to improve safety and security as well as programs and support must be evidence-based if we want to achieve trust and legitimacy in our system of justice.

“I look forward to working with the Department of Corrections uniform and civilian staff that have sacrificed through the most difficult times of our city and country during the height of this pandemic. Their collective service is the most valuable asset this department has. I am ready to get to work on Day 1 improving conditions in our City’s jails and prisons, and thank Mayor-elect Adams for the trust he has placed in me,” said Louis L. Molina.