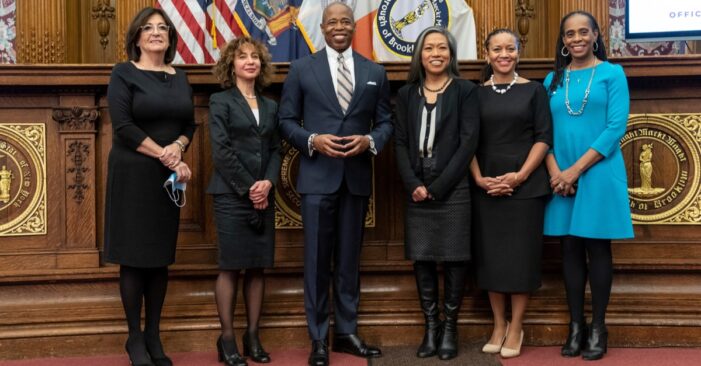 Brooklyn, NY — Today, Mayor-elect Eric Adams announced the appointment of five deputy mayors to his incoming administration — all women — including two appointees who will be the first deputy mayors of Asian descent.

“For us to ensure that this city recovers quickly while addressing the inequalities that plagued us well before COVID-19 struck, we must have top leadership that can both deliver for New Yorkers and is representative of New Yorkers,” Mayor-elect Adams said. “Representation matters. Perspective matters. My administration will understand the people of the city it serves — and each of the people I am appointing today has the experience and skills to help us turn this city around the right way. I am so proud of the history these new deputy mayors are making today, and I hope it sends a message that the most qualified people should not sit on the bench when the game is on the line just because of their gender, their ethnicity, or any piece of their identity.”

“I am honored that Mayor-elect Adams has chosen me to serve in this important role in his administration,” Grillo said. “I look forward to working alongside this exceptional team to implement the Mayor-elect’s vision to move forward and deliver a safer, more prosperous city for New Yorkers.”

“I am deeply honored to serve Mayor-elect Eric Adams and all New Yorkers,” Joshi said. “I am equally honored and humbled to share today’s stage with some of the most formidable and transformative women leaders. Our work ahead is clear. The operations of our city must meet and exceed the needs of every community, respond in real time and be a model of excellence for all urban centers. Led by Mayor-elect Adams’ inspiring dedication, purpose and focus, I am committed to working tirelessly and together to see these goals rapidly transform into reality.”

“I am deeply humbled to serve as Deputy Mayor for Economic and Workforce Development,” Torres-Springer said. “The pandemic and its economic fallout have impacted New Yorkers across the five boroughs, with lower-income and Black and brown New Yorkers hit the hardest. Under Mayor Adams’ leadership, we will ensure that our economic recovery leaves no one behind and that we implement policies that match the scale of this challenge. I am eager and ready to work with colleagues across government and partners across New York’s civic and business sectors to turn this crisis into an opportunity for New York City to once again reinvent itself and create real ladders to the middle class for all of its residents.”

“I am looking forward to bringing my many years of experience serving New York City’s most vulnerable populations to the Adams Administration,” Williams-Isom said. “I am ready to roll up my sleeves and partner with this outstanding group of leaders to help execute Mayor-elect Adams’ vision of a better City for all New Yorkers.”

“It is a profound moment for me today to be appointed to serve as Deputy Mayor for Strategic Initiatives for the City of New York. I am proud to serve this Administration, led by Mayor-Elect Adams, at a time when every New Yorker needs strong and dedicated leadership. Overseeing the architecture of the Administration’s key initiatives and priorities is a tremendous opportunity; it is one where we can design innovative and collaborative solutions that will address some of our more complex problems. Standing alongside an esteemed group of female Deputy Mayors, ready to serve New York City, is a powerful statement. I am more than ready and excited to work together, get things done, and make the city truly work for all New Yorkers,” said Wright.

“Hats off to Mayor-elect Eric Adams for recognizing the amazingly talented women in New York City and appointing so many of them as deputy mayors,” said former Comptroller Holtzman. “This gives all women — and everyone who has been a victim of discrimination — hope that they can make it too. Thank you, Eric Adams.”

“The Mayor-elect is taking seriously the responsibility of representing this city in all its diversity,” said former Manhattan Borough President Messinger. “His appointments today will not only bring intelligence, effectiveness and determination to City government. They will increase the likelihood that the needs, visions and perspectives of all New Yorkers will be a central focus of his administration. Women who are prominent among our front-line workers, our caregivers and our human service professionals will have a multitude of voices driving City policy — to the benefit of all of us.”

Lorraine Grillo, First Deputy Mayor
Lorraine Grillo is the Senior Advisor to Mayor de Blasio for Covid Recovery. She has also been President and CEO of the School Construction Authority since 2010, when she was elevated by former Mayor Bloomberg. Grillo is also the Commissioner of the NYC Department of Design and Construction.

Meera Joshi, Deputy Mayor for Operations
Meera Joshi is the Deputy Administrator for the Federal Motor Carrier Safety Administration and a visiting scholar at NYU’s Rudin Center for Transportation policy. Joshi also served as Commissioner of the Taxi and Limousine Commission and held executive positions overseeing a number of City agencies, including the NYPD and Department of Corrections.

Sheena Wright, Deputy Mayor for Strategic Initiatives
Sheena Wright is the first female President and CEO of United Way of New York City, leading a transformation of the organization and implementing several major citywide initiatives, including ReadNYC, the Together We Thrive Black Business Initiative, and the Campaign for Equity. She was appointed to Mayor de Blasio’s Education Sector Advisory Council and Governor Cuomo’s New York Forward Re-Opening Advisory Board. She also serves as a Trustee for Columbia University, and as a Board Member for New Visions for Public Schools, NYC Kids Rise, and the New York City Regional Economic Development Council.