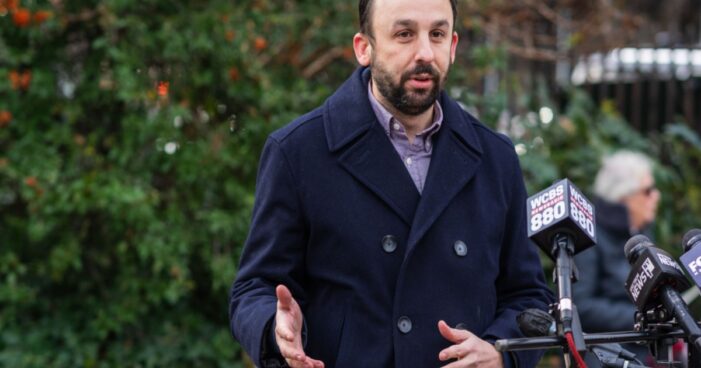 New York City, NY USA January 6, 2022. A candlelight vigil was held on Manhattan’s Upper Eastside on the one year anniversary of the insurrection on the United States Capitol Building in Washington DC (Shutterstock)

New York – New York City Mayor Eric Adams today hailed a new law he actively and strongly pushed for that suspends the city’s liquor license surcharge and puts money back into the pockets of small business owners. The legislation – sponsored by New York City Councilmembers Keith Powers and Justin Brannan – suspends the city’s 25 percent surcharge businesses pay on state liquor licenses for a year and is retroactively effective June 1, 2022. It is estimated that the legislation will help businesses citywide save $6.5 million over the next year. The legislation fulfills a key commitment made in Mayor Adams’ “Renew, Rebuild, Reinvent: A Blueprint for New York City’s Economic Recovery” plan released earlier this year.

“The COVID-19 pandemic hit our small businesses hard, especially our bars, restaurants, and entertainment venues, but we are now lifting them up by helping put money right back into their cash registers,” said Mayor Adams. “Suspending the local tax these businesses currently pay on liquor licenses will help them save money and keep their doors open as they continue to recover. This is yet another promise made, promise kept by our administration. I want to specifically thank Councilmembers Powers and Brannan, who sponsored the bill and who fought tirelessly for our local small businesses.”

“Small businesses are the backbone of our city’s economy, and this administration is committed to helping them during this critical time,” said Deputy Mayor for Economic and Workforce Development Maria Torres-Springer. “This law will provide welcome financial relief to our restaurants, bars, and entertainment venues, which were disproportionately harmed by the pandemic. This fulfils a key commitment from our ‘Rebuild, Renew, Reinvent: A Blueprint for New York City’s Economic Recovery,’ and we thank our partners in the Council for making this a reality.”

“This administration is transforming how city government interacts with small businesses, from bars to family-owned liquor stores,” said Department of Small Business Services Commissioner Kevin D. Kim. “By suspending the city’s liquor license surcharge tax, we’re putting millions back into the pockets of small business owners to fuel our economic recovery. Thank you to Mayor Adams for prioritizing this effort to support restaurants and the hospitality industry, in general, that help make New York City so special.”

“Suspending the liquor license surcharge is just one of many meaningful steps the city is taking every day to help stabilize the nightlife and hospitality industry. The Office of Nightlife knows that any relief and support for these venues goes a long way, as the recovery of liquor licensed establishments is essential to New York City’s recovery,” said Ariel Palitz, executive director, Office of Nightlife at the Mayor’s Office of Media and Entertainment.

“New York City’s restaurants, bars, grocery stores, and bodegas are the lifeblood of our neighborhoods,” said New York City Councilmember Justin Brannan. “These small business owners have been through the wringer over the past few years, and they need our support. Owning and operating a small business during normal times is no easy feat. Taking the health, safety, and well-being of your customers and employees seriously, while doing everything you can to make sure your business survives a global pandemic, basically calls for a miracle. Every politician loves to say, ‘small businesses are the backbone of our local economy,’ but talk is cheap. By suspending this liquor license surcharge, we can help lighten their load just a little bit as we explore additional avenues to ensure our small businesses can thrive beyond the pandemic. I’m happy to get this done in partnership with my colleague Majority Leader Powers and Mayor Adams.”

“Small businesses fill our city with culture, support local economies, and create dynamic neighborhoods, but too many have shuttered over the past two years,” said New York City Councilmember Keith Powers. “Today, I’m proud to join Mayor Adams and Councilmember Brannan to provide critical relief and put money back in their pockets. As we rebuild, it’s imperative we’re working tirelessly to support these beloved establishments–I’m very glad to partner this common-sense legislation.”

“I’ve said it all along that we should be eliminating barriers to prosperity and growth for our small businesses in NYC, and the passage of the bill to suspend the liquor license surcharge is a prime example of this,” said Brooklyn Borough President Antonio Reynoso. “This bill also helps us get closer to our COVID-19 recovery, allowing small businesses to utilize important income elsewhere in their businesses that can lead to growth and job creation. I applaud Council Members Powers and Brannan for championing this bill, and Mayor Adams for supporting the bill.”

“Thank you to Mayor Adams, Councilmembers Powers, Brannan, and all the supporters for suspending this discriminatory surcharge that only small businesses in the city of New York are forced to pay, on top of the hefty fees they already pay to the state for their liquor licenses. Plus, on top of saving city restaurants and bars some money from suspending this unfair surcharge, it will also reduce associated administrative burdens on small businesses, which is another reason to cheer,” said Andrew Rigie, executive director, New York City Hospitality Alliance.