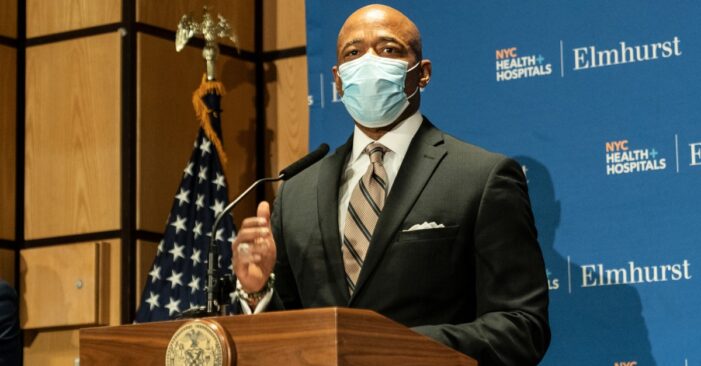 NEW YORK—Today, Mayor Eric Adams announced members of his senior staff who will oversee operations at City Hall and advance his strategic policies and priorities.

“This team has the experience, knowledge, and skill to take our government — and our city — to new heights,” said Mayor Eric Adams. “Our motto is Get Stuff Done — and we are already off to a flying start. Together, we will work day in and day out to make New York City safer, more equitable, and more prosperous for all.”

“We are at a pivotal moment in our city’s history, and we need strong leadership to bring New York back better than ever,” said Chief of Staff Frank Carone. “Mayor Adams has already proved himself in the early days of his administration to be exactly that kind of leader. I am honored to join his team and serve the city that I love. As chief of staff, I will be focused on ensuring City Hall runs smoothly, keeping our City agencies aligned, and delivering on the mayor’s vision for the city.”

Frank Carone, Chief of Staff
Frank Carone will join the Adams administration as chief of staff. Most recently, he was a partner at Abrams, Fensterman, Fensterman, Eisman, Formato, Ferrara, Wolf & Carone, LLP. He also served as law secretary for the Kings County Democratic Committee. Carone earned a B.S. from St. John’s University and a JD from Brooklyn Law School.

Dawn Miller, First Deputy Chief of Staff
Dawn Miller will join the Adams administration as first deputy chief of staff. Most recently, she was Vice President for Policy and Partnerships at Coord, a mobility technology company partnering with cities across the country. She previously served as chief of staff at the New York City Taxi and Limousine Commission (TLC). Dawn launched TLC’s Research and Evaluation practice, serving as its first director, and worked as a researcher at the Urban Institute in Washington, DC. She has a M.P.A. from Princeton University and a B.A. from the University of Virginia.

Madeline Labadie, Deputy Chief of Staff
Madeline Labadie will join the Adams administration as a deputy chief of staff. Most recently, she served as the director of strategic initiatives at TLC, where she led Vision Zero efforts and priority projects for the commissioner. She has also worked in policy and research roles for the Hotel Trades Council and Council Member Brad Lander. She holds a M.P.A. and a B.A. from New York University.

Ryan Lynch, Deputy Chief of Staff
Ryan Lynch will join the Adams administration as a deputy chief of staff. Before joining the Adams administration, he served as chief of staff for then-Borough President Adams, and prior to that as policy director. Lynch began as a Peace Corps volunteer in Burkina Faso, and has also served as an Alternative Livelihoods Officer for WEAVE, a small, community-based organization working to support economic empowerment for Burmese refugees along the Thai-Burma border. He served as the associate director for the Tri-State Transportation Campaign. Lynch earned a B.S. in psychology from Mary Washington College, and his M.S. in urban and regional planning from the University of Wisconsin-Madison.

Menashe Shapiro, Deputy Chief of Staff
Menashe Shapiro will join the Adams administration as a deputy chief of staff. Most recently, he ran his own consulting firm where he advised candidates for public office as well as companies and non-profits waging large public-facing campaigns. In 2021, Shapiro was a key advisor to Mayor Adams’ campaign and a member of the appointments committee on his mayoral transition. Prior to that, he worked on Michael Bloomberg’s presidential and mayoral campaigns, as a managing director at Tusk Strategies, and in private law practice. Shapiro earned his B.A. cum laude ineconomics from Yeshiva University and his J.D. from Cardozo Law School of Yeshiva University.

Tiffany Raspberry, Senior Advisor for External Affairs
Tiffany Raspberry is joining the Adams administration as senior advisor for external affairs, where she will be the key liaison between the mayor and key stakeholders and leaders both nationally and globally. She started her career working at the House of Representatives as a legislative assistant and scheduler, and later as a policy analyst and chief of staff at the New York City Council. Most recently, Raspberry was a senior team member of Mayor Adams’ campaign and co-led the intergovernmental committee on his mayoral transition. She earned her B.A in political science and African-American studies from Fordham University and a M.P.A in global public policy and management jointly from New York University and the University College of London.

Andrea Shapiro Davis, Senior Advisor and Director of Public Service Engagement
Andrea Shapiro Davis will join the Adams administration as senior advisor and director of public service engagement. She had been serving as CUNY’s interim vice chancellor for university advancement since August 2019. Since 2013, she has served as CUNY’s associate vice chancellor for Corporate, Foundation and Major Gift Development, a role in which she has spurred the growth of initiatives for women’s rights and diversity. Davis also served in the administration of former Mayor Michael Bloomberg, in which she served as special adviser to the mayor, executive director of the Mayor’s Office of Appointments, and executive director of the NYC Commission on Women’s Issues. She also spent four years as an assistant district attorney in Queens County and was an attorney in private practice. Davis is a proud graduate of Queens College and Hofstra University School of Law.

Eric Ulrich, Senior Advisor to the Mayor
Eric Ulrich joins the Adams administration as senior advisor to the mayor. He served as a member of the New York City Council for 12 years, representing the diverse communities of southwest Queens. He was instrumental in passing legislation that established the New York City Department of Veterans Services (DVS), and following Superstorm Sandy he organized relief efforts that helped displaced residents rebuild and recover. He is the product of New York City public and parochial schools, and is the first member of his family to earn a college degree. Ulrich earned his B.A. from St. Francis College and his M.P.A. at Baruch College School of Public Affairs.

Edward Mermelstein, Commissioner, Mayor’s Office of International Affairs
Edward Mermelstein joins the Adams administration as the commissioner of the Mayor’s Office of International Affairs. He joins the administration after as career as an attorney and an investment advisor with a broad range of international clients.  Fluent in English and Russian, Mermelstein emigrated as a refugee to the United States in 1976. He holds a B.A. from NYU and a J.D. from Western Michigan Law School. In addition to his work, he is involved in numerous charitable organizations supporting local as well as national causes rooted in culture, politics, education, and the arts.

Fred Kreizman, Commissioner, Mayor’s Community Affairs Unit
Fred Kreizman will join the Adams administration as commissioner of the Mayor’s Community Affairs Unit (CAU).  From 2002 to 2014, Kreizman worked at CAU serving Mayor Bloomberg, rising through the ranks from Brooklyn director to deputy commissioner. He also served on the board of directors of the Brooklyn Navy Yard Development Corporation from 2005 to 2016.  Recently, he worked at Capalino, serving as a managing director. Kreizman earned an M.P.A in government from Pace University, and a B.S. from Yeshiva University’s Sy Syms School of Business.

Roberto Perez, Director for Intergovernmental Affairs
Roberto Perez is joining the Adams administration as director of intergovernmental affairs (IGA). Most recently, he served in the de Blasio administration as commissioner of CAU, where led efforts to connect communities with the City’s COVID -19 recovery efforts. Prior to that role, Perez was senior executive director of intergovernmental affairs at the New York City Department of Education (DOE) where he managed city, state, and federal legislative affairs on behalf of the chancellor.

Dan Steinberg, Director, Mayor’s Office of Operations
Dan Steinberg will join the Adams administration as director of the Mayor’s Office of Operations. Steinberg is an urban planner with degrees from the University of Chicago and Columbia University. He recently served as Chief of Data Analytics for the NYC Vaccine Command Center (winner of the Citizen’s Budget Commission Prize for Public Service Excellence), and played a number of instrumental roles throughout the City’s pandemic response. He previously served as the deputy director of project and performance management at the Mayor’s Office of Operations. Steinberg originally began his career as State Senator Liz Krueger’s first legislative aide, and also worked as a researcher and advocate.

Rachel Atcheson, Special Assistant to the Mayor
Rachel Atcheson will join the Adams administration as senior assistant to the mayor, and will also be the at-large director of the SUNY Downstate Committee on Plant-Based Health and Nutrition. She most recently worked as deputy strategist for Borough President Adams, working on plant-forward nutrition initiatives such as launching NYC Health + Hospitals/Bellevue’s Plant-Based Lifestyle Medicine Program, and expanding healthy and sustainable food options in New York City schools. Previously, Atcheson served in the Office of the Mayor as the animal welfare liaison. Outside of government, she was senior campus outreach director for The Humane League, growing the organization’s campus outreach program from 18 to 52 campuses. She received a B.A. from Boston University.