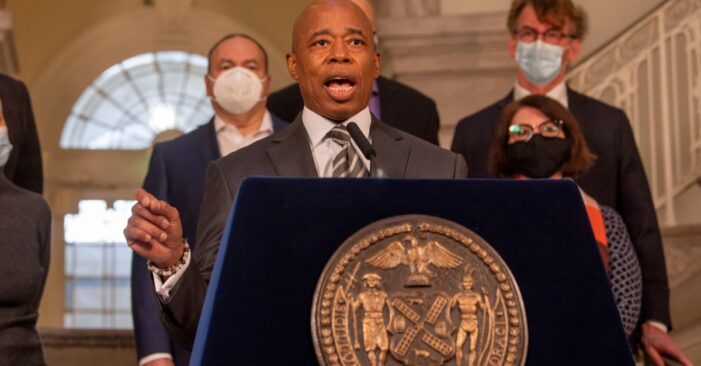 NEW YORK – New York City Mayor Eric Adams today made a number of appointments to his administration that will help build on his vision of creating a stronger social safety net for New Yorkers. Mayor Adams announced the appointments of Gary Jenkins as commissioner of the Department of Social Services (DSS) and Lisa Fitzpatrick as administrator of the Human Resources Administration (HRA), as well as the reappointment of Joslyn Carter as administrator of the Department of Homeless Services (DHS). The three have combined decades of experience serving some of the most vulnerable people in New York City.

“In order to help New Yorkers who are struggling and ensure a robust recovery from the pandemic, we need leadership with the right mix of experience, talent, and emotional intelligence,” said Mayor Adams. “Commissioner Jenkins, Administrator Fitzpatrick, and Administrator Carter have shown throughout their long careers in public service that they can deliver for New Yorkers who need help the most, and we are proud to have them join our team as we work every day to ‘Get Stuff Done’ for New Yorkers.”

Mayor Adams has articulated a vision to make social services more effective and accessible for New Yorkers in the greatest need that includes targeted outreach the development of a MyCity app — a single portal for all city services and benefits. He also put forward proposals to help homeless New Yorkers transition out of shelters and into stable, permanent housing.

“I commend Mayor Adams for uplifting the leadership of Commissioner Jenkins, Administrator Carter, and Administrator Fitzpatrick, a compassionate and conscientious team of public servants who work tirelessly to empower our neighbors in need,” said Deputy Mayor for Health and Human Services Anne Williams-Isom. “The mayor has set the tone for our administration to go upstream and prevent New Yorkers from falling into the rivers of poverty and homelessness, while strengthening our social safety net for those who need support now. Working together with our partners inside and outside government, we will deliver on this critical mission.”

“The unifying mission at the Department of Social Services is to support New Yorkers in need, and I cannot think of two individuals better qualified to carry forward this mission and lead the Department of Homeless Services and Human Resources Administration,” said DSS Commissioner Jenkins. “Administrator Carter and Administrator Fitzpatrick have dedicated their lives to strengthening the city’s social safety net, and I look forward to working with both to build on the progress we have made to tackle poverty and inequality, prevent homelessness, and provide critical services to our fellow New Yorkers in a compassionate and caring manner.”

“It is an honor to be appointed HRA administrator and I am eager to get to work improving how we serve New Yorkers in need and ensuring they can access vital resources,” said HRA Administrator Fitzpatrick. “For more than 35 years at HRA, I’ve seen firsthand the importance of the services we provide to New Yorkers and the care and compassion our staff strive to bring to our shared mission every day. I look forward to working with Mayor Adams, Commissioner Jenkins, and all our great staff at HRA, and am confident that our agency can play an important role in ensuring our city’s recovery from the COVID-19 pandemic is rooted in equity and inclusion.”

“Supporting New Yorkers in need has been my life’s mission, and it is a true honor to continue serving in my capacity as DHS Administrator,” said DHS Administrator Carter. “Each day at DHS, I am reminded of the important work our staff and provider partners do 24/7/365 to support New Yorkers experiencing homelessness, and I want to extend a special thanks to our teams and our collaborators for their tireless work ethic and dedication. I look forward to working with Mayor Adams, Commissioner Jenkins, and all our great staff at DHS to build on the important progress we have made transforming our city’s approach to homeless services, which is more important than ever as we emerge from the unprecedented challenges of the past two years.”

About Gary Jenkins
Gary Jenkins will serve as commissioner of DSS. Prior to his appointment as DSS commissioner, Jenkins served as administrator for HRA. In this leadership role as HRA administrator, Jenkins directly oversaw all HRA programs and operations. Prior to that, as first deputy commissioner at HRA, he oversaw the Homelessness Prevention Administration, Employment Services, the Office of Child Support Services, and the Fair Fares Program. In his more than 30 years with HRA, Jenkins has held a range of leadership positions in numerous HRA program areas, including the Medicaid Program and Temporary Cash Assistance and Supplemental Nutrition Assistance Program (SNAP).

Commissioner Jenkins will report to Deputy Mayor for Health and Human Services Williams-Isom.

About Lisa Fitzpatrick
Lisa Fitzpatrick will serve as administrator of HRA. As HRA administrator, Fitzpatrick will oversee all HRA programmatic and operational areas, ensuring New Yorkers can access the benefits and services they and their families need. With over 37 years in HRA, Lisa Fitzpatrick has worked her way up the ranks, from an eligibility specialist to the chief program officer for the Medical Assistance Program and the Family Independence Administration (FIA). She has also held a wide variety of other positions, including as assistant deputy commissioner of the Office of Procedures and Deputy Commissioner for FIA Operations. Throughout her career, Fitzpatrick helped to implement welfare reform policies and establish emergency services during 9/11 and Hurricane Sandy. In addition, she has implemented numerous initiatives with the goal of improving program integrity, while eliminating or reducing antiquated processes that made it difficult for staff to administer benefits. Fitzpatrick is a strong client and staff advocate who continuously looks for ways to improve access to benefits and services. She has a Bachelors Degree in Business Administration and a Master of Public Administration from City University of New York’s (CUNY) Bernard Baruch College.

About Joslyn Carter
Joslyn Carter, Licensed Clinical Social Worker (LCSW) will continue to serve as administrator of DHS. Carter is currently the administrator of the New York City’s Department of Homeless Services. Appointed in 2017, she is responsible for managing the daily operations of the nation’s largest and most comprehensive municipal shelter system for homeless adults and families through a network of directly operated as well as not-for-profit-operated facilities and programs.

Carter has worked at DHS for almost 18 years, with increasing responsibilities within the agency. She began her employment as a program analyst, managing 10 family shelters, and was promoted to a program administrator in 2008, where her responsibilities grew to managing over 25 family shelters. In 2013, Carter was appointed to the associate commissioner of Transitional Services and was responsible for the management of all family shelters. In 2015, Carter was appointed as the associate commissioner of family intake.

Prior to joining the DHS, Carter worked both for public and private entities, including Kings County Hospital as a social worker in both the Emergency Room and Obstetrics, the American Red Cross as the director of social services, and Talbot Services Children Services as the director of preventive services. She has also worked as a therapist, providing treatment for individuals, including children. She is certified as a student field instructor for Hunter College, ​has provided clinical supervision for MSW students​, and has developed and run support groups for women, girls, and families.

Carter brings over 25 years of professional experience and knowledge to her position.  She received her Master of Social Work Degree from the Hunter College School of Social Work in 1993 and completed a post graduate Clinical Social Work Fellowship from Yale University in 1996, receiving clinical training in working with children and families. She has also served as an adjunct professor at the Stony Brook School of Social Work.