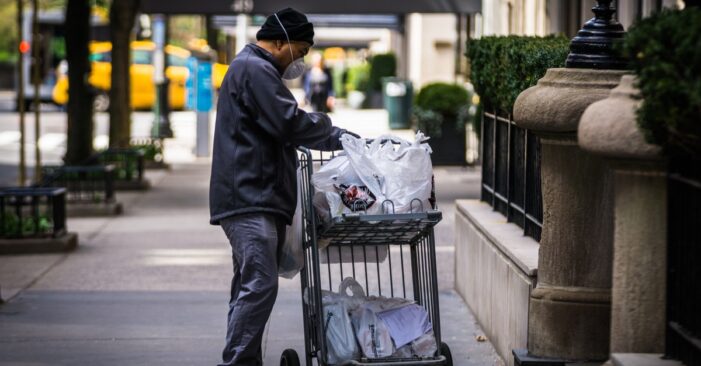 On day four of his tenure as mayor of New York City, Eric Adams made a gaffe that drew the ire of many who know the lie of “low-skill” labor. Advocating for the return of workers to their midtown offices, he said, “My low-skill workers, my cooks, my dishwashers, my messengers, my shoe-shine people, those who work at Dunkin’ Donuts — they don’t have the academic skills to sit in a corner office.” His poor choice of words drew backlash from across the internet (myself included). He rephrased his poor choice of words soon after, and Twitter moved on.

But the harm perpetuated by the myth of low-skill labor lingers. It’s an old lie, one that has implications much bigger than what Mayor Adams was alluding to. Historically, enforcing the idea that a worker is low-skilled has proved to be an excellent way to justify suppressing their wages.

I could talk about how this age-old strategy to suppress wages is a reflection of our culture’s low opinion of domestic labor and women’s invisible labor, or dive into the many classist and racist assumptions that underlie how we assign value to work. But at this juncture, I’d rather just leave the myth behind. There are no low-skill workers, only low-wage workers. Whether you work as a dishwasher or in a corner office, you deserve a wage that allows you to live with dignity.

With the exception of a few notable sectors, the minimum wage in New York City is $15 an hour. A statewide path to $15 was passed by the New York State Legislature in the 2016-17 state budget and created a phase-in process that allowed each region to get to $15 incrementally.

The movement known as the Fight for $15 started four years earlier, when 200 fast food workers in New York City walked off the job, demanding a living wage; it has since brought together a strong coalition of unions and expanded across the country, even leading a successful push for a ballot measure that, in 2020, established a $15 minimum wage in solidly red Florida. The Fight for $15 exemplifies a belief that I hold dear from my time in the labor movement, and as the chair of the New York State Senate’s Labor Committee: So-called low-skill workers can win big when they are organized.

The problem is that workers, even organized workers, are fighting on many fronts, and the real cost of living that inspired the demand for the $15 minimum wage has drastically increased since the Fight for $15 kicked off. Until 1968, wages generally climbed with both inflation and productivity, allowing working families to maintain the spending power needed to maintain economic security. In January 2020, the Center for Economic and Policy Research asserted that a minimum wage that climbed steadily with productivity would be about $24 an hour. After a decade of fighting for $15 an hour, productivity and inflation have outpaced us again. To give workers a boost, we need to develop a structural fix to relieve us from the grueling battle that goes into incremental, state-by-state wage increases, and free up organizing capacity for our other fights.

That’s why, this legislative session, I will introduce a bill in the New York State Senate that pegs New York’s minimum wage to inflation. It will work like this: At the beginning of every year, the Department of Labor will look at the change in a number called the Consumer Price Index, which looks at the average change in the price of goods year over year; it will then multiply that percentage by a region’s current minimum wage; and then add that increment to establish a new minimum wage that accounts for the change in the average cost of living.

Given the high inflation in 2021, this could raise the hourly minimum wage in some regions of New York by nearly a full dollar. By passing this bill, New York could set a national standard for recovering the spending power lost by working-class people, setting our economy on the road to a recovery that builds from the bottom up. Matching minimum wage to inflation is a technical change that has huge implications for the organizing power of the resurgent labor movement and non-union employees who have simply had enough.

I also carry the hope that creating a technical connection between the minimum wage and inflation will cause a paradigm shift for low-wage workers. The Senate district where I was born and raised, which I now represent, was the epicenter of the epicenter at the peak of the pandemic, where neighbors are taxi drivers, construction workers, street vendors, restaurant workers, and delivery workers — the very low-wage workers we once applauded as essential. (It’s funny how essential workers become low-skill workers when it’s time to get the economy going again, isn’t it?) By increasing spending power for these workers, by granting them the increased security that comes with better wages, I hope to interrupt our culture’s flawed misunderstanding of a wage as something that reflects your merits.

The skill of a worker is irrelevant. I fundamentally believe that whether you type all day on a keyboard in a corner office or you work the opening shift at Dunkin’ Donuts, you deserve a wage that keeps a roof over your head, food on your table, and helps create savings for a rainy day.