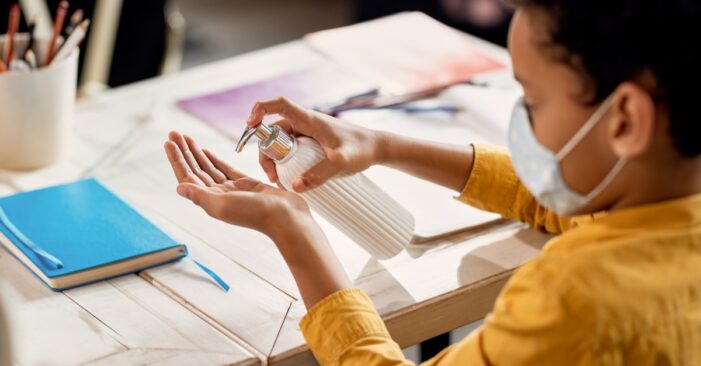 By Samantha Maldonado, THE CITY

Scarlet Taveras was 17 when she evacuated her high school, just south of the World Trade Center, on Sept. 11, 2001.

Now, 20 years later, after a career in fashion that took her to Europe and a stint in Atlanta, Taveras is back in her childhood home in Washington Heights — this time, as the mom of two sons in public school.

Her boys, ages 9 and 12, are preparing to go back to full-time, in-person school next week. Taveras is worried about how they’ll fare during the transition after more than a year of remote learning, in which they feared going outside, saw family members die of COVID-19 — and navigated the move to a new state.

The behaviors and feelings she’s noticed in her sons as they live through the pandemic are similar to — but not exactly the same as — what she and her friends experienced in their teenage years in the wake of the terrorist attacks.

She credits the robust mental health support and resources she received in high school as essential to helping her cope and rebound from the trauma of 9/11 — and hopes quality services will be available for her kids, too.

“We were pretty bad, but the kids now are 10 times worse,” Taveras said.

The terror attacks taught valuable lessons about how trauma manifests in students and how schools can offer mental health support in the era of COVID-19, service providers and experts interviewed by THE CITY said.

But because no two disasters are the same, the experts say, New York City faces new challenges to provide adequate care to its nearly 1.1 million students, whose lives have been forever upended by the pandemic.

‘Cry at Your Desk’
The importance of addressing mental health in New York City schools can in part be traced back to 9/11, which marked a major shift.

Kevin Dahill-Fuchel, the executive director of the nonprofit Counseling in Schools, who has been working with the New York City school system since 1993, said that before the attacks, officials thought of mental health in a narrow way, as something reserved only for those going through a particularly hard time.

“September 11 was a moment of awakening to the need for there to be a broad special availability for children and adults in a time of large-scale crisis,” he said.

There’s been “a huge evolution over these 20 years to the recognition of the impact of emotional needs not just on children’s academic progress, but just their growth and development in general.”

After 9/11, FEMA funded Project Liberty, which allowed state and local agencies to create crisis counseling programs in schools, as well as conduct outreach to students and families. Money from the project helped schools expand their mental health programs.

Taveras remembered the approach from her school — the Leadership and Public Services High School — was, “We’re happy to see you, we’re here to help you, whatever you need, if you cry at your desk, it’s OK.”

She said she visited a guidance counselor frequently, taking advantage of an “open-door policy.”

The therapists on hand helped too, as did the out-of-school mentors who assisted with college applications and consistently checked in with the students. Hands-on activities like knitting and trust-building exercises helped her and her peers cope.

Back-to-School Concerns
The Department of Education says it’s approaching this back-to-school season with students’ mental health at top of mind.

“After the trauma caused by the pandemic, we are opening healing-centered schools this fall where each child will have a caring adult they can go to when in need,” said Nathaniel Styer, a DOE spokesperson​. “The mental health of our students is at the core of our reopening plan, and that is reflected in the significant investments we’ve made in hiring over 500 social workers and prioritizing social-emotional learning and screenings.”

Styer declined to disclose how many of the promised 500 social workers the DOE had hired at this point, only noting, “Schools are well on their way to hiring the social workers for those positions.”

The DOE also promised to add to the system 100 new school psychologists.

Additionally, the DOE will train mental health workers to provide care to students in groups across 350 of the system’s more than 1,800 schools. The department also has trained over 75,000 school staff to recognize signs of trauma in students, respond as needed and foster community.

And schools in the 26 neighborhoods hardest hit by COVID are connecting with mental health clinics so that students can receive therapy and clinical services.

Even as the DOE strengthens and expands programs already in place, there’s significant concern as to whether the efforts will be sufficient.

A 2019 report from the city’s Independent Budget Office found that about 44% of schools lacked social workers during the 2018-2019 school year. Last school year, the city employed just under 4,480 full- and part-time social workers and guidance counselors to serve over a million students.

Taveras said the DOE’s plan to address mental health concerns has been unclear to her, despite regular emails from her kids’ schools that detail COVID protocols and logistics.

“What will the first day of school look like?” she said. “There’s a lot of emphasis on the vaccine, but nothing about, ‘We’re committed to making sure your kid is OK,’ no list of services.”

Styer said parents this week will receive communications about the city’s Bridge to School Plan 2.0, which is enhancing the plan from last school year that trained school leaders in how to foster healing in the classroom.

Fear Is Local
Adequately responding to the mental health issues students may be facing will be a challenge for schools, given what’s known so far about how young people are coping, and remembering how 9/11 affected students, said Christina Hoven, a professor of clinical epidemiology in psychiatry at Columbia University’s Mailman School of Public Health.

She found that over 10% of the students experienced multiple symptoms consistent with post traumatic stress disorder and nearly 27% displayed mental health problems. Two-thirds of the students had previously been exposed to trauma, compounding the severity of their responses.

Hoven said she expects to see similar outcomes — including high rates of anxiety and depression — in children due to the pandemic, even though it’s different from 9/11.

There’s no “ground zero” from which the impact of the pandemic radiates, but young people are scared of losing a parent to COVID or getting sick themselves.

They’re affected if they knew family and friends who became sick or died. And even for those whose families COVID spared, the isolation, uncertainty and disrupted routines have taken a toll.

“The orders of magnitude of traumatic effects of COVID are way far greater than was the case for 9/11,” said Dr. Pamela Cantor, founder and senior science advisor of Turnaround for Children, and an author of a study on the impact 9/11 had on New York City school children. “But nonetheless, the 9/11 message was that for children, what causes fear for them is local, it’s what’s immediately in their environment.”

Sleepless Nights
Two decades ago, Taveras noticed she and her classmates often had angry outbursts.

She experienced sleepless nights, instead spending her time in the living room in front of the TV, waiting for responders to find people in the rubble. For years, if she heard a plane, she’d duck. To this day, her heart palpitates and hands sweat at the sound of sirens or clanging metal.

Now, she’s attuned to changes she’s observed in her sons since the beginning of the pandemic, largely from the isolation and disconnect that came with remote learning. They became stressed and struggled to focus, she said.

Her older son was depressed and unmoored. When she moved the family from Atlanta to Manhattan, she sought therapeutic care for him at Mount Sinai Hospital. Her younger son began to bite his nails, a habit that went away after he spent six weeks at summer camp.

So far, such effects seem widespread: a national poll from the University of Michigan released in March found that 46% of parents observed new or worsening mental health issues in their teens since the pandemic started.

Across the country, youth visits to emergency rooms for mental health issues increased, according to the U.S. Centers for Disease Control.

‘No Script to This’
Experts point to parental involvement as the key to monitoring students’ mental health and behaviors — and noticing internalized and less apparent symptoms of trauma. Also crucial: a community-centered approach to create stability in student’s lives as they go back to school.

The transition back to the classroom can be a relief to kids bogged down by the monotony and loneliness of online school, but it can be an added stressor. What can make a difference, experts say, is a culture of safety and belonging.

“The beginning part of going is often the hardest,” said Dr. Linda Chokroverty, a child and adolescent psychiatrist who works in the ER at Montefiore Hospital and helped coordinate a mental health response to 9/11 after the attack.

“And then once they’re there, the familiarity of the activities, the people, the kids — that really helps ground them and engage them,” she added.

Dominick Nigro, the director of the Office of Student Services for public schools in Staten Island until 2003, said the most important aspect of his district’s response was the partnerships forged with community-based organizations.

They boasted local ties and helped enhance the schools’ efforts to engage and support families and students.

“There was no script to this. We had a crisis plan in place, and we used that as the fundamental framework, but the magnitude was something none of us expected,” said Nigro, now an advisor to the National Center for School Crisis and Bereavement at the Children’s Hospital Los Angeles.

‘What Is Normal?’
Helaina Hovitz, 32, a student at Lower Manhattan’s Intermediate School 89 during 9/11, thought her school’s mental health response to the attack was inadequate. She said her peers only sought treatment well into their 20s.

“I think the reason so many kids slipped by, and the reason that I could have slipped through the cracks, is because I continued to do well in school, I continued to want to hang out with my friends,” said Hovitz, now a writer and mental health advocate.

“I think there’s this belief that unless a kid is really acting out or really going into themselves and their grades are dropping, or they are antisocial,” they may not need help, she added.

The efforts, where they were concentrated, were largely successful, according to studies of how children fared.

“All of that intervention after 9/11 worked. Those children actually did better, in the short-term they did better than the children in the outlying areas who had nothing,” said Hoven, describing how resources poured into schools closer to Ground Zero compared to schools outside of Manhattan.

“The most important lesson of that is all the children, not just those who appear to be affected, but all children are affected by a cataclysmic event, like COVID, like 9/11, like Sandy, like any disaster,” she added.

In the COVID era, Hoven emphasized the need for schools and officials to pay particular attention to poorer areas. She noted that Black, Asian and Hispanic students face a particularly high need and require culturally appropriate resources and services, including in other languages.

For her part, Taveras said she’s prepped her soon-to-be eighth and fifth graders to prioritize their wellbeing over grades as they go back to school.

“There’s this rush to go back to normal at this point, but what is normal?” she said. “There’s so much pressure to be all these things, but we’re just trying to make it through.”

This story was originally published on [September 8, 2021] by THE CITY.”