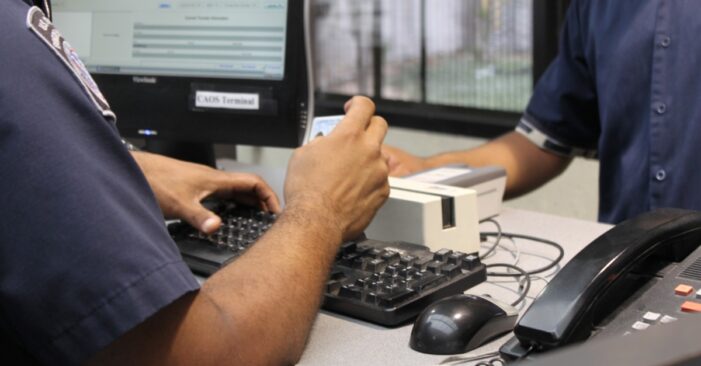 The 18 photos show people in warehouse, tent, and outdoor areas. Inside, people stand shoulder to shoulder and sleep with no space between them. Adults, children, and babies line the interior hallway of a tent facility. The overcrowding makes it impossible for the people in the photos to social distance. CBP generally does not test people before detaining them in close quarters, putting them at risk of exposure to COVID-19 while they are detained.

Also in the photos, people in outdoor areas sit on the cement floor under shade from hanging mylar “space blankets”. Yuma experienced near-freezing temperatures at night during the time period of the photos.

CBP’s detention conditions have been consistently inhumane across presidential administrations. Photos of CBP’s Tucson sector facilities in 2015 show unsanitary toilet areas inside cells with no privacy. Other photos and a Department of Homeland Security (DHS) Office of the Inspector General report show dangerous overcrowding in 2019, including the holding of hundreds of people under a bridge in El Paso. In 2018 and 2019, three children died in CBP processing centers, and others died soon after release or transfer out of the agency’s custody. A 2019 complaint to the Department of Homeland Security’s oversight agencies described CBP’s denial of medical care to children.

In 2020, a federal court ordered that CBP provide people detained for 12 or more hours in the agency’s Tucson sector with a sleeping mat, hygiene supplies, regular meals, and clean drinking water. The court also ordered Border Patrol to provide people processed by the agency who are detained for longer than 48 hours a bed, blanket, shower, and medical assessment. Yet denial of these basic necessities continues in many parts of the border. For example, in October 2021, thousands of Haitians were held for days in an outdoor camp near Del Rio, Texas. A lawsuit and government investigation are pending regarding allegations of physical abuse and racial discrimination at the camp.

Yuma has experienced historically high border crossings in recent months. While some have argued that the current overcrowding there is reason for an increased crackdown at the border, current anti-immigrant policies likely contribute to the operational challenges. The Biden administration has chosen to continue Trump’s cruel Title 42 policy, which allows CBP to expel people at the border without even a meaningful opportunity to request asylum. The quick expulsions have led many people to attempt multiple border crossings, often being apprehended multiple times, leading to increased total apprehensions.

Given reports on recent flight patterns, some of the people in the photos are likely Haitian. Each weekday, two planes have each taken up to 130 Haitians from Yuma to Laredo, Texas and then on to Haiti. Over 14,000 Haitians have been expelled since September. Advocates criticized the continued expulsions to Haiti this week during the 12th anniversary of a devastating earthquake that forced Haitians to leave their country. Many of them settled in Latin American countries that they have recently had to leave.

The conditions under which CBP is holding people in Yuma are inhumane and illegal. The agency’s history of racist and cruel treatment has demonstrated that it is not capable of serving a humanitarian mission. People arriving at the border should be received by community-based organizations that can provide them shelter, medical treatment, legal orientation, and assistance in reaching their destination.