Immigration advocates have heralded last month’s redesignation of Temporary Protected Status (TPS) as a major victory for thousands of Haitians in the United States. 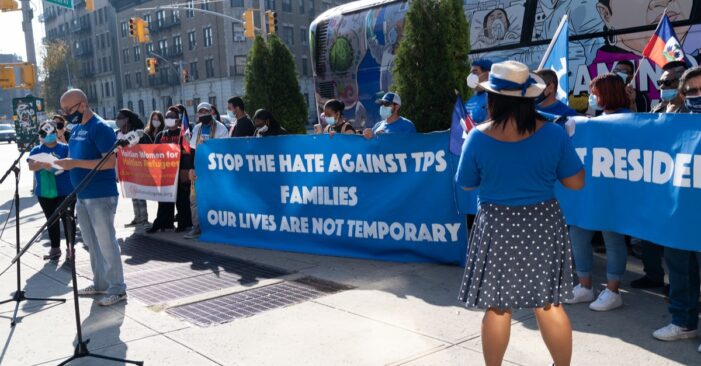 Immigration advocates have heralded last month’s redesignation of Temporary Protected Status (TPS) as a major victory for thousands of Haitians in the United States. But the days that followed have brought new setbacks for immigrants and their advocates, including scams.

Setbacks include a Supreme Court ruling which determined that TPS could not guarantee permanent residency, even though it did not directly impact the redesignation announcement that came in May.

The redesignation of TPS, which could cover an estimated 100,000 Haitians, has also led to new opportunities for con artists to take advantage of people desperate to receive the protection.

“We have those people who are literally trying to scam and prey on the most vulnerable members of the community,” said Guerline Jozef, president of the nonprofit Haitian Bridge Alliance, which serves Black immigrants nationwide. “It’s painful to see the community getting scammed and abused after we worked so hard to get that relief for them.”

Since the May 22 redesignation announcement, people posing as attorneys or pastors have offered to file TPS applications on behalf of Haitian residents nationwide. The scammers, both Haitians and non-Haitians alike, are largely targeting undocumented immigrants and have in some cases asked for as much as $5,000. The Bridge Alliance alone has received more than 100 reports of similar TPS scams, Jozef said.

The new TPS designation applies to Haitians residing in the U.S. as of May 21 and who meet other eligibility requirements, according to the Department of Homeland Security (DHS).

Scams have occurred despite the fact that the application process for TPS is not open yet. Last month’s DHS announcement on the redesignation stated that a federal register notice will be published with instructions for filling out a TPS application. The mentioned notice had not been published as of June 14.

But even though there is no application process yet, community members are apparently being manipulated. To help stop the scams, the Haitian Bridge Alliance created a video in Creole to warn Haitians about those trying to take advantage of them.

“We have people who are so desperate, they do not have the money, so they are reaching out to everyone asking to borrow money so they can apply for TPS,” Jozef said. “Right now, there is no way for them to apply.”

When the government does publish application instructions, Jozef said organizations like the Bridge Alliance can provide free application assistance and even help cover the minimal federal application fees, if needed.

While she had only heard rumors of the recent TPS scam, Haitian American Lawyers Association of New York (HALANY) President Sherbune Paul said that scams surrounding various immigration benefits are common in the community. She advised people to get any agreement in writing and thoroughly research the name of any service provider they do not know personally.

“Do your research, go on Google, put their name in there and see if this person is actually a licensed attorney, see if anything comes up with their name,” said Paul.

Paul said she once advised a woman who wanted to apply for the Haitian Family Reunification Parole Program, which allowed permanent residents and citizens to petition for parole for family members in Haiti. Midway through the application process, the out-of-state service provider the woman hired to file her application stopped responding to calls and would not return her money, she said.

“Let’s stop entering into word-of-mouth agreements, let’s make sure we’re getting everything in writing,” said Paul.

Right now, the Bridge Alliance is telling people not to believe anyone who offers to file a TPS application, since there are no instructions for applying. Jozef said people can report scams to United States Citizenship and Immigration Services (USCIS).

“We will let them know when the federal register is open to actually apply,” Jozef said. “If anybody tells them they can apply for them, it is not true, it is fraud.”