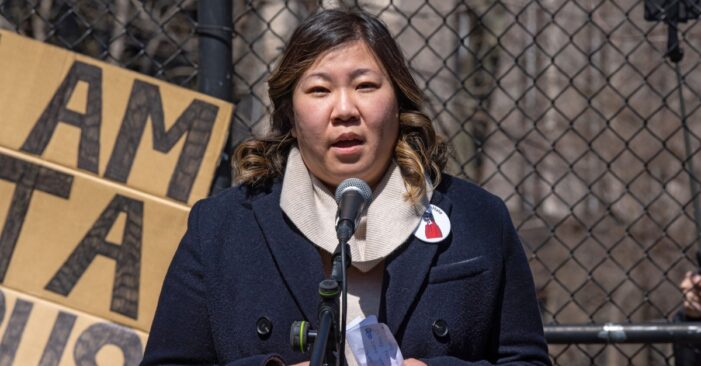 Congresswoman Grace Meng (D-NY) speaks at a rally against hate in Columbus Park in the Chinatown neighborhood of Manhattan on April 3, 2021 in New York City. (Shutterstock)

Chinatown was buzzing with activity more than usual on Sunday, as hundreds of protestors chanted “Save Jing Fong,” “How do you spell racist? M-O-C-A“ and “Chinatown! Not for sale,” as they marched from the Chinese-American Planning Council’s headquarters on 150 Elizabeth Street, to the doors of the Museum of Chinese in America (MOCA) at 215 Centre Street.

The protest was organized by community activists and workers who demanded a stop to CPC’s 24-hour workdays for home health workers, oppose the displacement of people and small businesses in Chinatown and the Lower East Side, and also to dissent the closing of the iconic Jing Fong restaurant, which had its lease terminated in May by one the largest landlords in Chinatown and board chair of MOCA, Jonathan Chu.

180 workers were laid off when Jing Fong closed its doors in March this year, after suffering financial loss due to the pandemic. While the community came together to keep the restaurant open, the Jing Fong is set to be relocated to a smaller venue in Chinatown.

“Institutions like MOCA and CPC are the ones that beat you and say ‘stop Asian hate’. They will force homecare attendants to work 24-hour days and say ‘I love you.’ … They will insult the seniors and then put their portraits in their front doors. How dare they!” said Zishun Ning to the crowd, an organizer with the Chinese Staff and Workers’ Association.

The event, which lasted approximately two hours, is the latest development in the fight against displacement and for better working conditions for the immigrant community residing in Chinatown and the Lower East Side. Activists, workers, and local representatives shared their support and experiences with the crowd.

Melania Batis, 56, who immigrated from Honduras in 2005, is a mother of four and has been working as a homecare attendant for twelve years. She told Documented that her eyes, back, and arms hurt because of the physical strain that she got from working 24-hour shifts, five days a week, without vacations. “My children blame me for not being there for them when they woke up, or when they went to sleep. They don’t understand that I had to work this much, so they take it out on me,” Batis said, adding that her youngest child is under nine years old.

Batis’ experience is not unique. Earlier this month, Documented reported on the effects that 24-hour-shifts had on the physical, emotional and mental health of those on the frontlines. Plagued by a ruling that permits CPC to pay for only 13 hours for 24-hour workdays, workers, many of whom are members of 1199 SEIU, say that it is unfair to not be paid for their work.

Soila Puma, 66, originally from Ecuador, made the trip from Brooklyn to join the event. “I do not work in the homecare industry, but I am here to offer my support as an immigrant worker. The violence needs to stop,” she said in Spanish, mentioning that a fair treatment for homecare workers will translate to fair treatment for all immigrant workers.

“MOCA is proud to serve as a longtime cultural pillar and gathering space in Chinatown,” a museum spokesperson said. “Regardless of distractions motivated by completely unrelated issues, we will stay focused on what matters: contributing Chinese American journeys to U.S. history, and healing through education.”

immigrants, immigrants in the U.S., NYC