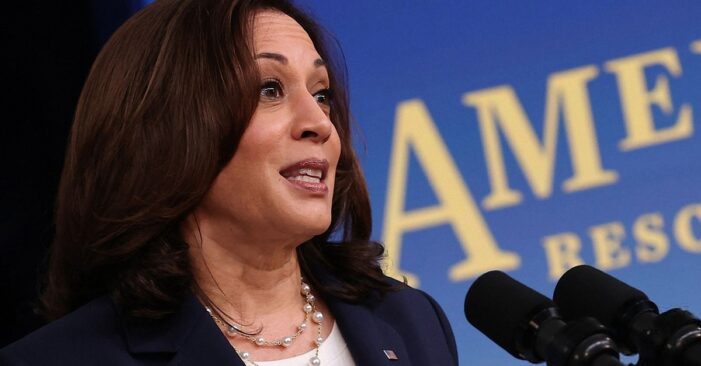 New York, NY: On October 5, 2021, grassroots groups delivered a letter to Vice President Harris urging her to use her authority as President of the Senate to sidestep the Parliamentarian’s advisory opinion and clear the way for the inclusion of a path to citizenship for millions of people in the reconciliation package. The letter was signed by 56 grassroots groups and networks, including NAKASEC Action Fund, CASA in Action, Center for Popular Democracy Action, NYIC Action, CHIRLA, Make the Road New York, and FIRM Action. Last week, grassroots groups rallied outside of the Vice Presidents’ house, requested a meeting with her and doubled down on the demand online via Tweet storm. Sans a response on the meeting request, groups are making the letter public.

Murad Awawdeh, Executive Director of the NYIC Action and Co-Chair of FIRM Action:
“The Vice President has the authority and the moral obligation to ignore the Senate Parliamentarian’s advice and include the path to citizenship in the reconciliation package. It is unacceptable that a Senate staffer–an unelected staffer–could derail years of hard work by our movement to win citizenship for millions of undocumented immigrants. We elected President Biden, Vice President Harris and Democrats into the majority to deliver on years worth of promises. Millions of undocumented youth, TPS holders, farmworkers and other essential workers lives are on the line. This moment is about them and their families who are in limbo waiting for the country they call home to welcome them. We won’t walk away empty handed. We’re going to continue to take direct action in the streets and through the halls of Congress until Democrats do their job.”

Ana Maria Archila, Center for Popular Democracy Action:
“Vice President Harris has a historic and unprecedented opportunity to clear the way for Democrats to finally deliver on the promise of a pathway to citizenship. Acting as the Presiding Officer of the Senate, she can and should recognize that including a pathway to citizenship in reconciliation does not violate Senate rules. The erroneous and misguided advisory opinions by the parliamentarian, which run afoul of precedents and expert opinion, must be set aside.

Jung Woo Kim, NAKASEC Action Fund:
“NAKASEC Action Fund calls on Vice President Harris to ignore the Parliamentarian’s faulty advice to exclude immigration from the federal budget. In this critical moment, the question of whether or not a pathway to citizenship for immigrants is possible lies squarely in the hands of Vice President Kamala Harris. The Biden-Harris administration’s track record on immigration is mired with a series of failures from camp conditions in Del Rio, Texas to continued abuses and deportations of Haitian migrants, even with and despite control of the House, Senate, and White House. They must course-correct now. Vice President Harris has a unique opportunity to reverse the Biden-Harris administration’s currently dire legacy on immigration. Democrats cannot afford to fail to act. Vice President Harris, there is no question that you have the legal and constitutional authority to disregard the Parliamentarian’s advice, and no question that immigration belongs in the budget. We implore you to exercise political courage and leadership now. I have been undocumented for over 20 years and I cannot wait any longer. Our communities cannot wait.”

Yaritza Mendez, Co-Director of Organizing at Make the Road New York:
“We urge Vice President Harris to use her power to deliver for undocumented immigrants across the country. This is a historic opportunity for bold leadership from Vice President Harris and Democrats in Congress to pass citizenship for millions this year, regardless of the parliamentarian’s opinion—which is just that, an opinion. A truly inclusive recovery for our country must include a path to citizenship that will keep our neighbors and loved ones safe while boosting the economy. The parliamentarian’s opinion can, and should, be disregarded to ensure a pathway to citizenship becomes a reality in this budget reconciliation package.”

Gustavo Torres, President of CASA in Action:
“Immigrants for too long have been caught in a trap of being told they must garner the support of xenophobic Republicans or moderate Democrats. In fact, our future rests in the hands of a immigrant-heritage Vice-President who led the Senate in her unwavering support for the undocumented. Democrats owe a debt to immigrants in exchange for each election cycle in which we mobilized our people to the polls because of the promise to reform our broken immigration system. Vice-President Harris has the law and the power on her side to deliver on that promise.”

Angelica Salas, CHIRLA Action Fund President:
“There are moments when action defines a commitment better than any spoken word. This is one of those moments and Congress has the opportunity to make countless dreams a reality as it Builds Back Better with immigrants. For decades, immigrants have been there for this country, especially during the ravages of the Covid-19 pandemic. Now it’s time for Democrats in leadership, led by Vice President Harris as the presiding officer of the Senate, to ignore the Parliamentarian’s misguided advice and say yes to immigrants.”